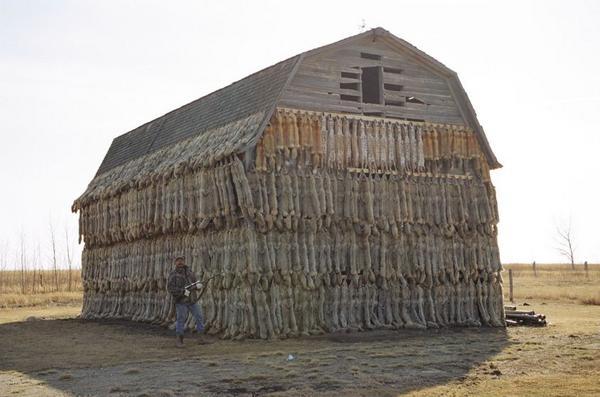 Tomorrow coyotes throughout the Province of Nova Scotia will be snared and trapped in a government-sponsored bounty spree. The killing, euphemistically called "a pelt incentive plan," will pay $20 per coyote pelt with the intent of reducing Nova Scotia's coyote population in half. Paradoxically, the number of coyotes that live in the Province is unknown. According to, Nova Scotia's Natural Resource Minister John MacDonell, the killing incentive is aimed at "changing coyote behavior" and "reducing a problem wildlife population" (CBC News 4.2.10). In seemingly contradictory comments, however, MacDonnell has acknowledged publicly that coyote bounties "don't work to control the population," (CBC News 4.22.10). And there is no scientific evidence that killing coyotes changes the behavior of the coyote's that survive.

At the same time that Nova Scotia has chosen to pursue a coyote bounty, the highly esteemed - Nature Saskatchewan (a provincial affiliate of Nature Canada) passed a groundbreaking resolution on September 26th that explicitly condemns predator bounties as "economically inefficient, counter-productive and ecologically damaging, as demonstrated in various studies throughout the world."

The resolution comes on the heels of a large-scale Saskatchewan government sanctioned bounty that resulted in the killing of at least 71,000 coyotes between November 2009 and March 2010. Saskatchewan's agriculture minister initially defended the bounty as an effective way to reduce coyote populations and agricultural conflicts; this despite the lack of scientific evidence to support his claims. The Ministry was less defensive of the bounty after it shelled out more than $1.4 million dollars to participants and a CBC investigation revealed that coyote body-parts were being laundered in from surrounding provinces. The story, which made national headlines, showed 37 maimed coyote carcasses in an Alberta park with their paws cut off near the Alberta-Saskatchewan border. Coyote paws were the required body part to obtain the $20 bounty in Saskatchewan.

In a news release issued today by Project Coyote, Dr. Paul Paquet- Scientific Advisory Board member of Project Coyote and Senior Scientist of the

Echoing Dr. Paquet's concerns, Trevor Herriot- Conservation Director of Nature Saskatchewan - said, "We are concerned that the bounty Saskatchewan piloted last year could have wider ecological consequences so we wanted to speak out strongly. This resolution not only acknowledges the critical role coyotes play in maintaining species diversity and ecosystem health but it also makes a clear statement that the conservation of endangered species, and wildlife in general, is dependent on ecological policies that recognize the central role of apex predators - which in today's prairie ecology, is the Coyote. The members and board of Nature Saskatchewan are also concerned that the bounty could be re-instituted or suddenly applied to wolves in the northern half of the province."

Nature Saskatchewan's resolution states, BE IT RESOLVED that Nature Saskatchewan reaffirms its position with the Government of Saskatchewan that it strongly objects to the use of public funds in a bounty program on Coyotes that has the potential to cause serious ecological damage, and

BE IT FURTHER RESOLVED that Nature Saskatchewan reaffirms its position with the Ministry of Agriculture that predator bounty programs cause both economic and ecological damage in the long run, due to demonstrable ecological principles, and that anti-predator policies, dictated entirely by monocultural economic practices, are incompatible with sound ecological management, and

BE IT FURTHER RESOLVED that Nature Saskatchewan urge the Government of Saskatchewan to empower the Ministry of Environment to follow its mission of protecting the environment by monitoring predator populations with a wider effort to maintain key ecological and evolutionary processes, particularly in fragmented landscapes such as our remnant grasslands, beginning with an environmental impact study of the "pilot" bounty program of 2009-2010, and

BE IT FURTHER RESOLVED that Nature Saskatchewan continue to advance Resolution 97-1, recognizing that predation is a key factor shaping ecosystems, and that species at risk are merely components of the ecosystem subject to the ecological processes of predation, and

BE IT FURTHER RESOLVED that Nature Saskatchewan recognize that decimation of the Coyote in the winter of 2009-2010 is a significantly disruptive ecological event that will have repercussions for wildlife populations, including rodents and species at risk, and that it will undertake to address this issue in its policies and practices, and

BE IT FURTHER RESOLVED that Nature Saskatchewan encourage the Government of Canada, through the Minister of the Environment, to recognize that the prairies are one ecosystem within Palliser's Triangle, and that endangered species management requires a national ecosystem-based conservation strategy that recognizes the essential role and critical value of the Great Plains Coyote as the remaining apex predator in an altered system.

While Nova Scotia begins what will undoubtedly be an ineffectual coyote slaughter, New Brunswick has publicly declared that it will not enact a coyote bounty stating that, "New Brunswick prefers to let nature to take its course," as reported by the CBC News (4.26.10).

"We have known for decades that random killing of coyotes can actually be counterproductive resulting in increased coyote and rodent populations," Dr. Paquet stated. "Let this progressive resolution passed by Nature Saskatchewan be a wake up call to Nova Scotia and other jurisdictions that bounties and other mass killings of coyotes are ethically indefensible, ecologically reckless, and counter to sound scientific wildlife conservation."

Like lynching, predator bounties are an archaic and brutal thing of the past that have no place in civilized society- especially when it is well documented that they are ineffective and counterproductive. It is time for all to speak out against such unconscionable brutality against wildlife.

Email Minister of Natural Resources John MacDonell at premier@gov.ns.ca and the Nova Scotia Department of Tourism, Culture & Heritage and tell them you will not be spending your tourist dollars in Nova Scotia until they stop predator bounties: