An alligator that was illegally poached in Texas on Monday has been identified as the one that attacked and killed 28-year-old Tommie Woodward early last Friday morning.

Woodward ignored posted and verbal warnings about alligators at a marina in eastern Texas and dove into the water late at night. A gator quickly grabbed him and dragged him under the water, where he died.

A game warden found his body shortly after, about 200 yards from the scene. Woodward died from drowning, an autopsy found, but the gator had severed his left arm below the elbow.

A customer at the same marina who identified himself only as "Bear" brought in the dead alligator on Monday, saying he'd baited it with a chicken and then shot it in the head, according to the Houston Chronicle. "He had to go," "Bear" said. "That's what happens when you kill someone." 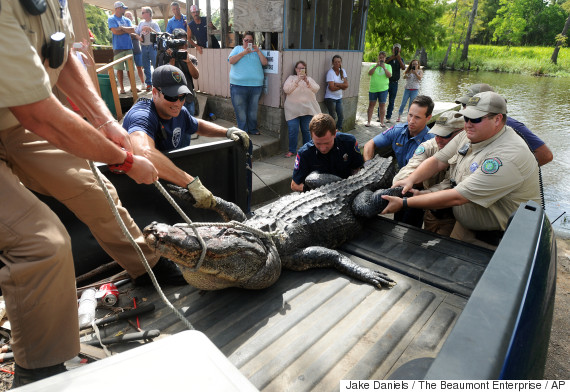 Texas game wardens get assistance from Orange firefighters as they lift the body of an alligator into the back of a truck at Burkart's Marina, Monday, July 6, 2015, in Orange, Texas.

A local justice of the peace told the paper that game wardens cut open the gator's carcass and found some of Woodward's remains inside. "Bear" and four other men fled the scene when game wardens arrived.

Woodward's death is reportedly the first verified fatality from an alligator attack in Texas since 1836.

Woodward's body will be returned to his native Missouri for burial.

"He was a character. He was always happy, and talking with everybody, and he was talkative," marina regular Travis McKnight told KFDM news. "He was a pretty cool guy." 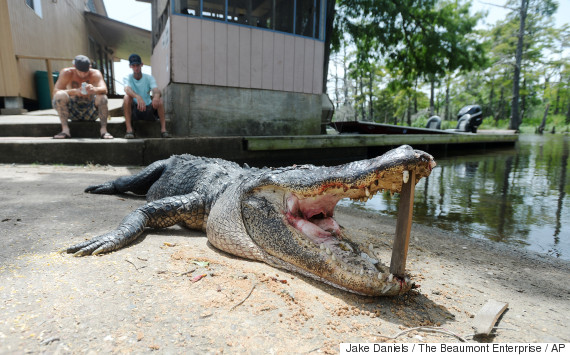 Two men sit near the body of an alligator at Burkart's Marina, Monday, July 6, 2015, in Orange, Texas. 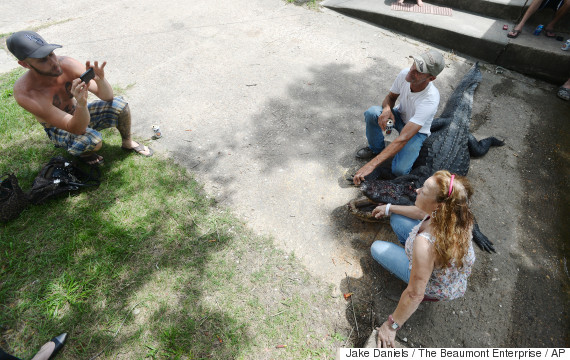 People take a photo alongside the body of an alligator at Burkart's Marina, Monday, July 6, 2015, in Orange, Texas.

Killer Alligator Killed In Eastern Texas
Animals In The News