The word is out. The "nones" are rising. At last count, close to one-quarter of the American population now declares itself unaffiliated with any particular religion. While most of these "nones" believe in a "higher power" or "ultimate cause"--or even in a traditional god--they are not interested in affiliating with a specific religion. They have abandoned denominational dogmatism. They are demographic "nones."

The late Jerry Falwell's conservative-fundamentalist Christian worldview is quickly losing ground in America. With few exceptions, it is not shared by the media, academia, entertainment, youth, or the Supreme Court. The masses largely ignore the paranoia of the Pat Robertsons of the land. Conservative American Christianity may be slowly killing itself--and taking God to the grave with it.

In writing a thesis for a degree in religion, I had the opportunity to engage via an extensive online survey with nearly 1,600 former conservative / evangelical / fundamentalist Christians who are now either agnostics or atheists. All of them were formerly true believers, as conservative and convinced of the veracity of their religion as Mike Huckabee is of his. But they are now among the deconverted--former believers who have rejected the Christianity they once eagerly embraced.

Why the change in thought? My research revealed five common themes ex-Christians reference in explaining what led to their deconversions.

These failures--heresies?--of American Republican Christianity, a denomination unto itself, are responsible for the diminished voice of Christianity in the marketplace of ideas--a circumstance misinterpreted as persecution against the righteous. Their stubbornness to adapt, or at least moderate--on culture, on scripture, on science, on politics, on gays--has driven away millions, especially young people who won't put up with slander against their LGBT friends or with pastors telling them it is a sin to live in the twenty-first century.

Time is running out on conservative Christianity in America. It must change. If its adherents don't "put their swords away," they will kill God in America. And this time there won't be a resurrection.

-Rodney Wilson holds master's degrees in history and religion and teaches both at a community college in Missouri. His book, Killing God: Christian Fundamentalism and the Rise of Atheism, is based on his graduate thesis and is available on Amazon. 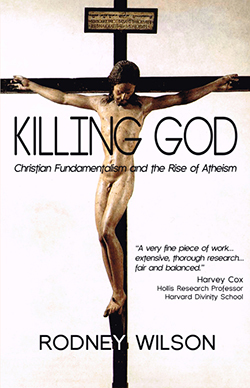