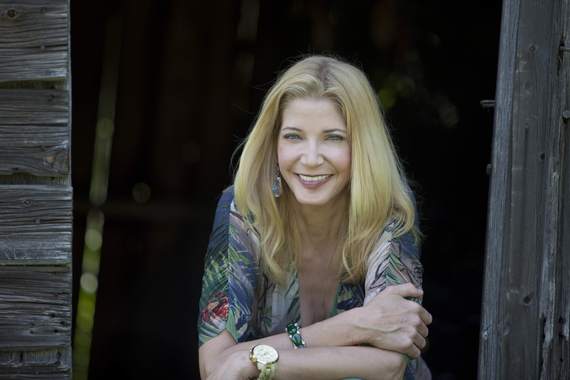 Candace Bushnell is a novelist and television producer who, from 1994-1996, wrote a column for The New York Observer, which was adapted into the bestselling anthology, Sex and the City. It became the basis for the HBO hit series of the same name.

She followed up with the internationally bestselling novels, 4 Blondes, Trading Up, Lipstick Jungle, One Fifth Avenue, The Carrie Diaries, and Summer and the City. Her novels have been successfully adapted for television and films. Candace is the winner of the prestigious 2006 Matrix Award for books (other winners have included Joan Didion and Amy Tan), and received the Albert Einstein Spirit of Achievement Award.

In Killing Monica, Pandy "PJ" Wallis is a renowned writer whose novels about a young Manhattan woman, Monica, have generated a series of enormously popular films. After the success of the Monica books and movies, Pandy wants to write something entirely different: a historical novel based on her ancestor, Lady Wallis. But everyone wants Pandy to keep cranking out Monica books -- as does her husband, Jonny, who's gone deeply into debt financing his new Las Vegas restaurant.

When her marriage crumbles and the boathouse of her Connecticut family home goes up in flames, Pandy realizes she has an opportunity to reinvent herself. But she will have to reconcile her new ambition with SondraBeth Schnowzer, who plays Monica on the big screen -- and who may have her own reasons to derail Pandy's change of plans.

In a recent interview you said Killing Monica is not about Carrie Bradshaw or Sarah Jessica Parker. Will you expand on that?
I went online to BookCon, where a reporter was trying to be provocative and made the comparison. It's hilarious to me. When I read this stuff, it's like I'm not reading about myself. We know tabloids make things up. When I read that I thought, "This must be what it's like to be a celebrity." People like a juicy story, one that's easy, but not true. There's just no truth to that allegation.

You recently said Killing Monica is actually about identity. Will you tell us more?
The idea of Killing Monica is truly about identity. Monica is a metaphor for the idea that women have this idealized fantasy of a more perfect version of themselves. We create a persona that works for us in our twenties and thirties, but when we're in our forties, that persona no longer works as well. It's like wearing an itchy sweater. What does a woman do? Killing Monica is really about rediscovering one's self, and if needed, reinventing the self. It also addresses the issue of having the courage to find your true voice again. I feel so many women lose their real selves when they're younger and rushing to be super-women, to accomplish everything. For many, part of the self gets lost while they're caring for others.

And of course, PJ is trying to rediscover herself in the novel.
Yes. One reason I laugh when people conclude the novel has something to do with my life is because the novel is a screwball comedy with lots of outlandish things happening. There's mistaken identity, and it's totally madcap.

But it's all in the service of the core theme of the book: a woman's search for her true identity.

So, unlike PJ, you don't have "high literary ambitions"?
(Laughter) If one didn't have high literary ambitions, there'd be no reason to be a writer. Every writer I know, in every genre, takes writing really seriously, as we should. Writing is hard. It's creative and imaginative, and I have respect for anyone who engages in that process. Of course, I aspire, but the reality for me as a writer is simple: I've always had a grating voice -- even as a child -- and you can never get away from your own voice. And that's what Pandy is on the verge of discovering about herself. Although now, after talking with you, I would probably go back and make that moment in the book a bigger one. (Laughter).

Last Sunday, in the New York Times column By the Book, you said you would require every person to read Demonic Males: Apes and the Origins of Human Violence. Will you expand on that?
It was a serious and eye-opening book. It's a fascinating scientific examination of human behavior. It addresses male violence towards women, and how it's used for power. Part of my thinking in this regard comes from my having grown up in the sixties. There was a revolution in the popular culture that said, "Say no to the man." It was a rebellion against corporate America and the homogenization of people. I was thinking about that revolutionary spirit when I answered that question.

In that interview, you also mentioned tweaking and rewriting, saying 'Writing is rewriting.' Tell us about your writing process.
I'll start a book and get as far as I can -- maybe eighty pages into it. Then, I go back, again and again. I keep revising before I move on to the next section. I break the book into chunks. I write set pieces or little playlets -- almost like short stories within the novel -- and by going back repeatedly, I eventually integrate all the pieces.

Your books and films have been viewed as addressing a new paradigm for today's women. Tell us more.
I've always been interested in examining the kinds of lives women lead. I'm fascinated by where we are as a culture and by the age-old questions about feminism and the empowerment of women. I don't have answers, but equality for women is extremely important to me.

If you weren't a writer and television producer, what would you be doing today?
I'd probably write jingles. (Laughter)

You're hosting a dinner party and can invite any five people, living or dead, from any walk of life. Who would they be?
I'd definitely invite Hillary Clinton. Then, I'd want Eleanor Roosevelt, Margaret Thatcher, Mother Teresa, and Madonna to be there.

What would you be talking about?
I could think of a really sappy answer.

Don't give us sap. Give us Candace.
I'd hope they'd all bring their experiences and insights to making the world a better place for women.

And, emojis are...?
Emojis are graphic symbols, a sort of shorthand way of conveying messages. They're sometimes called emoticons, like a smiley-face. They're usually encoded in devices and convey a range of thoughts or feelings. Mine are cheeky, fun emojis geared towards women.

I'm also working on my Killing Monica theme song for a music video. I have a line of stationary coming out. And, there's a Killing Monica wine. It's really great. You get a book and a bottle of wine. It's sold online.

Mark Rubinstein, author of The Lovers' Tango and Return to Sandara.