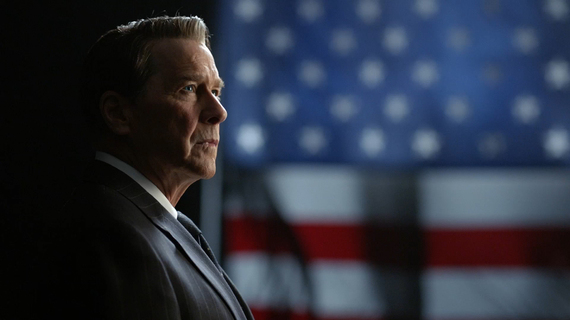 Sunday night, I found myself in the crosshairs of the long-awaited Killing Reagan, and, well, I was not exactly slain. That was not due to any preconceived political ideas about Reagan. Frankly, now trapped in the political hospice called the Trump and Hillary room, even a passing revisit of Reagan's life, albeit at his nadir, swept in a momentary breath of optimism. The inspiration for this biopic was the book by Bill O'Reilly and Martin Dugard, another in the Killing Series page-turners; this one is a fairly effective work, as was their earlier attempt, Killing Kennedy. The O'Reilly-Dugard formula is to collect the lesser-known facts of history --usually about someone slain, or in the case of Reagan, nearly assassinated --and to weave a new narrative, from the melodramatic, even salacious details.

As someone under the same microscope of biopic filmmaking (www.silencepatton.com), I applaud O'Reilly for convincing a general audience to watch anything about history beyond the history of the iPhone. But in order to get this type of film right, there are two unshakable rules. 1) The lead must be recognizable as your historical figure; think of Robert Downey Jr as Chaplin, Gary Oldman as Sid Vicious, Tom Hulce as Mozart. 2) They must possess acting gravitas of an Anthony Hopkins as Nixon, to be persuasive enough to make physical resemblance a non-issue. No small feat when it comes to Reagan--there have been so many comic impressions on Saturday Night Live, not to mention the decades of political opponents recasting him as a bumbling B-movie actor with his finger on the nuclear button. However, I must say in this movie, Tim Matheson pulls it off, playing Reagan with a sense of dignity and flair that is positively Reaganesque. He also captures the former actor's snappy one-liners: "There I go again." Or on the debate stage with Mondale, "I will not exploit my opponents youth and inexperience." Or going under the knife after the assassination attempt, as he disarms his doctors with, "I hope you are all Republicans."

Kyle S. More is also excellent in the role of John Hinckley, Reagan's would-be assassin. Their stories run in parallel montages, intercutting Hinkley's psychological downfall with the rising political career of Reagan, from former governor, facing Jimmy Carter in the presidential race, and then onto his inauguration. And then the film flatlines. It fails to chart the dramatic rise and fall of Reagan's health, a true roadblock in his ability to govern. It does capture the chaos as General Alexander Haig (played by Patrick St. Esprit), who in the absence of Vice President, George H. W. Bush returning on a flight, must grab "the football," with the nuclear codes. And you feel the whole world stop, as Reagan's sustained heartbeat becomes America's. You see Nancy (Cynthia Nixon) become the real take-charge character, to the Cabinet's dismay, in Ronnie's absence. Nixon does a fair job, but registers more like a modern Sex in The City character than Nancy Reagan, in the classic retro (visage) image of a 1930s-40s actress.

The unique vision of Killing Reagan, to the chagrin of most conservative commentators (George Will called it the No-Facts Zone), was that the attempted assassination was not just a blip on the screen, but rather an event that transformed Reagan's life, making it necessary for Nancy to take control. With the physical damage from the bullet and its psychological fallout, Reagan quickly began to deteriorate, losing his leadership powers and a grip on his unreliable White House staff. Nancy, whom Reagan affectionately calls Mommy, at times with helpless, boyish vulnerability, is forced to step in as his defender. She fires appointees, watches over his affairs and, most important, makes sure that Reagan's presidency aligns with her astrologers, soon to be permanent consultants to the White House. Now, if that crisis does not get our hearts beating! Reagan too, partially to appease Nancy, becomes reliant on these people "of the stars."

Yet, the stars that rise and fall in this TV version are not that of Reagan and his fading former self, now reliant on the ascendant Nancy (the new First Lady-in- Chief), but rather between Reagan and Hinckley. This very shy assassin, more pitiful than evil, does not provide a real challenge to Reagan as president. But rather Hinckley is driven to the act only by his obsession over Jodie Foster, star of Taxi Driver, also starring Robert De Niro as Travis Bickle, a source the director Rod Lurie, uses for his exact camera shots in filming Hinckley. Laurie also uses the final overhead tracking God view from Taxi Driver in which Bickle /Hinckley carries out his rampage--as a perfect match for the Reagan crime scene. Hats off to the director, for executing an homage, disguised just enough. But overall the film lacks insight and it progressively becomes less than epic and more standard HDTV.

Historical biographies, adaptations or originals, live or die based not on historical facts alone but how these events form a dramatic arc. Mere homages to great figures remain just that. A movie without two sides is just propaganda. Killing Reagan tries to see its two main characters through a psychological lens, but it neglects the clash of protagonist and antagonist in an inevitable showdown. There are no hard choices to make, nor twists and turns of success and failure. Rather it lulls us into an historical memory. After all, it is made clear early in the film and book that, true to history, Hinckley might have assassinated Jimmy Carter or anyone for that matter. He had no malice against Reagan, and, no stake in his demise. Hinckley was not trying to thwart the destiny of this president, but only act out his sadly, deranged fantasy. And so, all drama is lost. In the end, did it really matter that Hinckley was Killing Reagan or someone else I'm afraid not.

Killing Reagan, as did the book Killing Patton before it, suffers from the same temptation present in our current political discourse: Grab the short-term gain of melodrama at the sacrifice of longer-term human inspiration, as Reagan embodied in his hopeful vision. It avoids an attempt to answer the more nuanced questions of how a flawed presidential life, meets us all in the human struggle to enact value and meaning. Instead it settles on easy answers in an all too familiar peddling of pabulum to secure immediate gratification and mass-media exposure. If you have a pulse for Reagan, by all means watch this flick, but otherwise, it is definitely not a must-see.