The Dead Sea, shared by Israelis, Palestinians and Jordanians isn't listed as one of the Wonders of the World, but it should be. It is ominously still, and its beauty breathtaking. Chunky crystals of salt wash up on shore like diamonds, cutting through a black silky mud. Pink mountains, a purple sky and baby blue water are the backdrop for bathers whose bodies barely sink below the super-salty surface of the inland sea. No life lives there, except for bacteria. 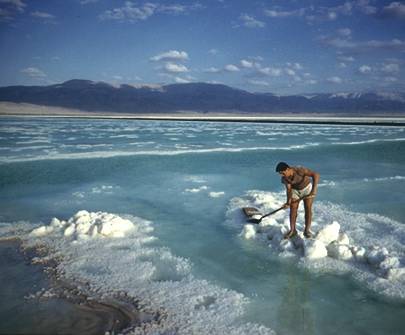 Known as Cleopatra's beauty secret, the Dead Sea is arguably one of the oldest spas in the world. Thousands of tourists from all over come to soak up the sun's (safer) rays and bathe in the mud. The mineral rich air is believed to have a therapeutic effect, but it could just be that different rules of nature apply at the lowest place on Earth -- the Dead Sea is 400 meters below sea level.

This romantic prelude has a purpose. And that is to save the Dead Sea from dying: The Dead Sea, you see, has been drying up. Its major source of water -- The Jordan River -- is not reaching its destination.

Israel's President Shimon Peres has a grand plan -- to pump water from the Red Sea to the Dead Sea. He's been working lately with France's President Nicolas Sarkozy to put the plan into high gear.

Instead of solving environmental problems at the source, the politicians believe a new "Peace Park" a la Las Vegas in the Arava Desert and a massive "Peace Conduit" that carries water from the south to the north of Israel and Jordan will bring prosperity and peace to the Middle East. Finally!

The politicians have been ploughing full steam ahead, signing contracts, shaking hands. But Rachel Bergstein, an activist from the US, is now in Israel working for Friends of the Earth Middle East. On the regional green enviro blog Green Prophet Rachel discusses the environmental ramifications of such a peace canal. We give her a high-five.

Many environmentalists are concerned that the Peace Conduit will have adverse environmental impacts.... the system will require an enormous amount of energy. As water flows downward from the Gulf of Aqaba to the Dead Sea it will produce enough hydro-electricity to power the desalination plants that are to be built near the Dead Sea. Eilat, however, is elevated, so the water will need to be pumped over Eilat before it can flow downwards toward the Dead Sea.

Under the agreement, Jordan will receive the majority of the desalinated water; Amman's elevation, however, is 1,400 meters higher than that of the Dead Sea, so another massive quantity of input will be necessary to pump the water to Jordan. It is unclear where this energy will come from; potentially, Israel, Jordan, and Palestine are setting themselves up for a gross dependence on fossil fuels -- with all of their ecological consequences -- in order to power this project.

Although proponents of the project argue that it will "Save the Dead Sea," it is entirely possible that the project will actually harm the rapidly-fading landmark. Initial scientific predictions reveal that the 2 billion cubic meters of water that will be pumped from the Red Sea every year will just sit on top of the Dead Sea - instead of mixing in - and will cause growth of algae and gypsum.

The Dead Sea is a huge tourist destination in both Israel and Jordan because of its therapeutic qualities, so if the Peace Conduit changes the composition of the water it could have disastrous results for the tourist industry. This is also extremely significant to the Palestinian Authority, who also control a portion of the Dead Sea, and who will need opportunities to improve their floundering economy as they build their future state.

The Peace Conduit (links to gov website) could be quite damaging for the Arava Valley. The valley contains underground aquifers. The pipe will run through the valley, so seawater from the Red Sea leaks out of the pipe, it could contaminate the aquifer, rendering it unusable. Additionally, the Arava Valley is located in the Great Seismic Valley. Earthquakes could greatly harm the Conduit, which poses another threat for contamination of groundwater. Since the Arava is a highly productive agricultural center, this is another risk that is both ecological and economic.

TreeHugger, where I write, has been following the peace canal and the Dead Sea for some time. Want to learn more about preserving a world heritage site and wonder of the world? See:
How to Save the Dead Sea from Dying Twice
How to Wake the Dead Sea