Yesterday, Senator Jim DeMint, from the politically loopy state of South Carolina, announced that he intends to summarily block any Senate legislation that he finds personally objectionable, regardless of which party introduced the offending bill. This also goes for non-controversial legislation that would have normally blasted through the cooling saucer with unanimous consent.

Put another way, DeMint is exploiting an increasingly less obscure parliamentary maneuver to, in effect, shut down the United States Senate. And he's taking hostages.

It goes without saying this is inexcusable, and it serves to illustrate with striking clarity the lengths to which the Republicans will go to obstruct the Obama agenda and, more importantly, to sabotage this slow growth economic recovery.

As Rachel Maddow has tenaciously documented for many months now with her "They're Not Embarrassed" series, the congressional Republicans are incapable of feeling self-conscious about their their pandering to the tea party or their grinning photo-ops with giant stimulus checks they once violently opposed with threats of secession. 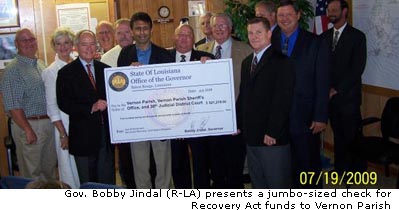 They're simply not ashamed to be the political equivalent of grade school recess spoil-sports. Hurling the kickball into the pricker bushes instead of sacking up and playing the game. No more deference to compromise -- even heated partisan debate that eventually leads to compromise. The Republicans of 2010 are all about childish breath-holding and ear-plugged "Lalalala! Can't hear you!" loud noises.

There aren't any grown-ups on that side of aisle anymore.

Conversely, while many of us on the left have excoriated the Democrats for capitulating to the Republicans on certain bits of legislation, objective distance along with continued observation of the post-Bush Republicans has offered a more positive perspective on the current majority party, specifically regarding how the Democrats behaved during the Bush years. Yes, they can be ineffectual, frustrating, disorganized and self-loathing -- too willing to repeat a Republican frame than to invent a uniquely Democratic one. But they're mostly adults.

The Democrats by and large have a record of compromise with Republicans, even though their comparative generosity hasn't been reciprocated by the Republicans. The Democrats understand that voters want to see legislative accomplishments and not idle grabassery. As the minority party, the Democrats compromised in the name of getting work done -- but, since leadership changed hands in 2007, the Republicans have filibustered twice as often. And since the inauguration, the Republicans have tried to filibuster nearly every piece of legislation that's brought to the floor for a vote. Middle class tax cuts, small business tax cuts, the healthcare reform bill, the recovery bill, military spending, unemployment benefits. All of it.

So it seems laughable on its face that otherwise smart people are going around these days and repeating this bullshit meme about how "both sides" are to blame for the insanity that's overtaken American politics.

The DeMint one-man choke hold on the entire Senate is unmatched on the Democratic side. The filibustering is unmatched. The brazen, hubristic flaunting of obvious hypocrisy is unmatched.

But still it's "both sides." Somehow. And I'm directly referencing here left-of-center writers, pundits and, disappointingly, guys like Jon Stewart, who's Rally to Restore Sanity is directed at "both sides."

It seems as though whenever Democrats control Washington, liberals shift focus from attacking conservatives and Republicans to attacking "both sides," perhaps out of some kind of hipster intellectual craving to seem fair-minded (falsely fair-minded in this case). Or maybe it's out of a desire to not appear subservient to the majority party. I don't know for sure.

Regardless of the motivations, an equivalency between "both sides" simply doesn't exist. But by being all-inclusive with criticism, the shotgun effect of the "both sides" meme taints the left with the far-right's exponentially crazier stink. A handful of trespasses on the left become inflated to and conflated with the the group-session-from-Cuckoo's-Nest meltdown happening on the right. Some legislative flailing on the Democratic side becomes incongruously magnified to the size of the all-out strangling of the U.S. Senate by the Republicans. To employ a metaphor here, I certainly hope that if I'm ticketed for rolling through some stop signs along an abandoned road, I'm not lumped in with drunken drivers who t-bone school buses filled with children. Sure, everyone breaks the law sometimes, but there are, of course, various levels of malfeasance -- levels that are deserving of different degrees of punishment and scorn.

Perhaps I'm missing something. But show me where there's equal and precise equivalencies between "both sides." Show me a TV pundit on the left with the same audience reach and capacity for wackaloon conspiracy theories as Glenn Beck. Show me a traditional media outlet on the left as massive as Fox News Channel or Clear Channel.

Sorry, "both sides" fetishists, but one viewing of her show proves that there's no comparison between Rachel Maddow's fact-based analysis and Sean Hannity's Republican talking point hootenanny.

Show me the photo ops in which Democrats proudly take credit for legislation they vocally opposed. Or show me someone at the highest level of Democratic power who still can't spell or speak coherent English -- who's nothing more than an overrated reality show grifter -- as Sarah Palin.

Show me Democratic obstructionism on the level of the Senate Republicans in the 111th Congress, or a Democratic senator who blocked every piece of legislation from coming to a vote. Show me a Democratic politician sex scandal with the same degree of flagrant hypocrisy as a Christian conservative "family values" Republican sex scandal. (It's worth noting here that the "both sides" meme can also be found among certain far-right whites who insist there's "racism on both sides" -- as though 13 percent of the population can be equally as racist as 70 percent of the population.)

Here's a real world example of the danger inherent in taking this shortsighted "both sides" view of the political spectrum. Ten years ago, the course of American history was irreversibly skewed, partly because too many liberals believed that Al Gore and George W. Bush were equally as lame. I remember it all quite clearly. Many of us thought both candidates were controlled by the same corporate benefactors. We thought they were both more or less indistinguishable on the issues. We yawned at the "lock box" droning and debate sighing from Gore, and we laughed at the verbal nincompoopery of Bush, and, at the end of the day, the glitches canceled each other out. And so, without seeing the forest for the trees, scores of us voted for Ralph Nader or stayed home altogether. Embarrassingly enough, I was one of those Nader votes. And those protest votes were enough to make the election nail-bitingly close, allowing the Supreme Court to ultimately tip the scales in favor of Bush.

It's almost overwhelming to recall how wrong we were, considering each candidate's polar opposite record over the subsequent decade. But we convinced ourselves that "both sides" were the same, when, in fact, history has proved this analysis to be resoundingly wrong. Devastatingly wrong.

While it's our duty as citizens to hold the government accountable, it's also necessary to operate within the bounds of reality when levying blame for a lack of sanity, or a lack of civility, or a lack of decent legislation. Ask yourself whether Republican obstructionism and contradictions are equally matched on the Democratic side. If the answer is "no," then decide which party ought to be appropriately spanked. Meanwhile, anyone who continues to employ the "both sides" meme, especially given the DeMint stunt, needs to seriously reevaluate their judgment criteria and wise up.

* * *
Quick book recommendation. I was recently introduced to an excellent book called Confidence Game, written by Bloomberg News Reporter Christine Richard. It is a history of a multi-year campaign by hedge fund manager named Bill Ackman to warn us of the vulnerabilities in the $2.5 trillion bond insurance market. Highly recommended.