Specialty metals manufacturer ATI reinvented itself in recent years. Instead of serving as a vital organ in the dozen communities where it operates mills, it decided to be a boil, blight -- a bane upon civic life in six states.

Communities once cherished their ATI specialty mills and the feeling was reciprocated. Managers knew mill workers by name, lived in the same towns and fulfilled civic responsibilities. The mills contributed to scout troops and fire departments. Townspeople referred to the plants as Uncle AL, for Allegheny Ludlum, the name before its Aug. 15, 1996 merger with Teledyne that created ATI.

But now, ATI is butchering that time-honored relationship. It has demanded tax abatements and special electrical rates and forced excessive overtime on weary workers. Its disdain for civic engagement is most clearly demonstrated by its decision to unlawfully lock its 2,200 skilled union workers out of their jobs on Aug. 15, despite the Steelworkers’ willingness to continue working. By wasting untold millions on security guards and highly paid, but inexperienced replacement workers, ATI has finished converting itself from a pillar of the community into a pariah. 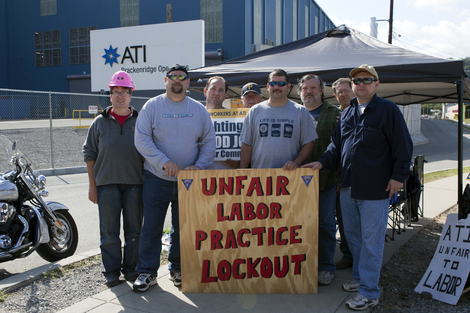 The experience of workers at ATI plants in Western Pennsylvania, particularly in Brackenridge, illustrates the corporation’s transmutation.

These workers, some with 30 years’ tenure at the mills in Brackenridge, Vandergrift and Bagdad, recall the days of Uncle AL and plant managers like Dick Simmons and Bob Bozzone. Both were metallurgists who worked their way up through the ranks. Both spent time in the mills, knew workers by name, lived in the community, and showed that they cared deeply about both specialty steel quality and community quality of life.

In fact, when members of the United Steelworkers union struck Allegheny Ludlum in 1994, Bozzone, who was company president then, continued their health insurance. Workers repaid those costs in increments when they returned to their jobs.

This time, the corporation has engaged in an aggressive, but failing, campaign to try to turn community members against the Steelworkers, vainly attempting to characterize them in newspaper ads as excessively paid ungrateful whiners.

In those ads, ATI failed to mention an important factor that most community members know -- the pay figure ATI cited was manipulative and disingenuous because it included compensation for hundreds of hours of forced overtime. Some Steelworkers have labored 12-hour days, seven days a week for months, even a year, some willingly, but most not.

Michele Rapp of Natrona Heights, who has worked at the Brackenridge mill for a quarter century, said of the ATI pay claim, “I wish we earned $94,000 for working 40 hours a week. We work 12-hour shifts seven days a week. And the hours won’t be any better when we return because so many workers have retired. And you can’t turn down the overtime.” To earn $94,000, ATI Steelworkers must labor 350 to 400 hours of overtime, which adds up to an additional two and a half months of work a year.

ATI also deliberately failed to mention that it is advertising for replacement workers and will hand each of them as much as $156,000 a year, plus room, board and transportation. ATI is giving outsiders with no knowledge of its mills nearly three times what the labor agreement calls for it to provide in regular compensation to its experienced, skilled and dedicated Steelworkers who clearly told the company they were willing to continue working while negotiating a new labor agreement.

And, of course, ATI neglected to note that it handed many on its of top leadership team, including CEO Richard Harshman, raises of up to 70 percent last year, increasing annual compensation for these individuals by millions of dollars. These country clubbers don’t work in hot, hazardous or physically exhausting conditions.

Kathy Vargo of West Leechburg, whose husband and father worked at ATI, said of Harshman and the other executives, “These guys are not affected by this. They don’t care.”

Dean Ansilio of New Kensington, who has worked at the Brackenridge mill for 22 years, said of the executives, “These guys don’t care about this community. They probably have three houses in three states.”

Leisa Brothers of Sarver, who has worked at the Brackenridge plant for 22 years, said the current executives and managers don’t spend time in the mills. “They don’t have a clue,” she said, “Let them work in the melt shop for a day, with the dangers and the noise and the overwhelming heat. It is so loud your body rumbles.”

Bill Hrivnak, who owns Ernie’s Bar in Brackenridge, recounted his son Craig, who has worked in the mill there for seven years, telling him that in one area, “it is so hot you think your shoes are going to melt.” 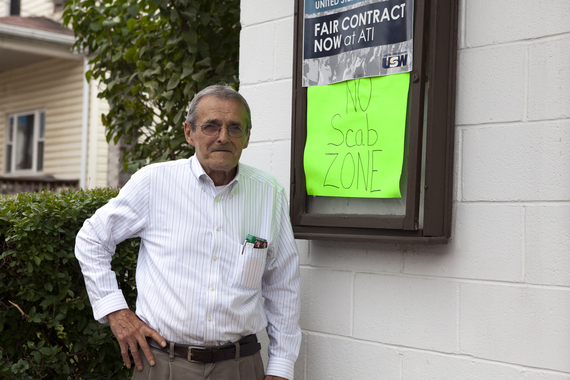 Bill Hrivnak at his bar, Ernie’s, in Brackenridge

Steelworkers like Leisa, Dean and Craig confront perilous conditions. At the Steelworker union hall in Brackenridge, a granite memorial bears the names of 48 workers killed in the mill since 1929. That is more than one death on the job every other year.

In the ATI ad for replacement workers, the corporation conceded only that “conditions are dangerous and unpleasant.” ATI didn’t tell prospective replacements that just three months ago, Executive Vice President Bob Wetherbee said that any new hires would probably need at least an associate degree in engineering or electronics and two years of training because of the highly technical nature of the work.

The ATI ploy to sow dissension and jealousy in the community appears to have failed miserably. Community members routinely drop off donuts and soup at union halls and send pizzas to the picket lines. Steelworkers picketing at mill gates report that 90 percent of passersby wave or honk their horns in support. Community members have joined Steelworkers on the picket lines.

Regina Stinson of New Kensington, whose husband works at the ATI plant in Vandergrift, said neighbors came by to ask if they could help after ATI locked out the workers.

Michele Rapp, who works at the Brackenridge mill, said she thinks many community members support the Steelworkers because ATI locking out its employees made no sense to them. They wonder, she said, “what was wrong with the Steelworkers working on an extended contract? Why would ATI rather spend money on other people from out of town?”

Workers and spouses who gathered at the union hall in Brackenridge last week talked about the financial stresses and fears ATI has caused. 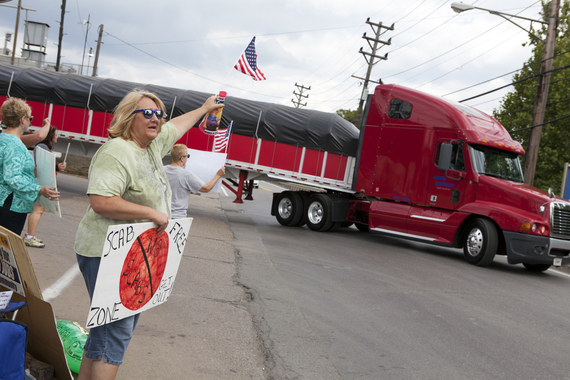 Leisa Brothers, who works at the Brackenridge mill with Michele, said she has stopped spending: “You don’t go anywhere. You don’t go out to eat. And that affects all of the businesses in town.”

Rachel Dehus of Freeport, whose husband has worked at the Brackenridge mill for 21 years, said that her family faces a pile of bills; the mortgage, car and college loans, utilities.

Dehus said her biggest fear is losing health insurance at the end of August. Unlike former company president Bob Bozzone who maintained workers’ health insurance during the 1994 dispute, Harshman has expressed no concern at all this time about the wellbeing of ATI’s workers.

In fact, ATI has informed 96 locked-out office and technical employees that the company is terminating their benefits at the end of August, which has led the United Steelworkers (USW) to file a federal lawsuit to enforce these obligations.

Cheryl Kanzic of Fawn Township, who has worked at the Brackenridge mill for 21 years, said: “My savings are on the line. We need a new roof. My car is 13 or 14 years old. But I am going to have to wait to do anything. We helped ATI make their money there. It is about to bear fruit. All we want is our fair share.”

With hard work and sweat, Steelworkers produced the specialty steel that made profits for ATI. But the workers and the communities do much more. Brackenridge is a good example.

A decade ago, ATI began planning construction of a new hot strip mill. Steelworkers, Brackenridge residents and Pennsylvania taxpayers all helped the corporation accomplish that. The Steelworkers agreed to significant work rule changes that ATI said it needed. Brackenridge, the school district, the county, and the state all granted ATI massive tax abatements by designating the construction site a Keystone Opportunity Zone (KOZ). And the state actually passed a law enabling ATI to secure special, lower electrical rates.

State Rep. Frank Dermody, who helped get that legislation passed, said at the time, “Working together, this is a great victory for the Allegheny Valley. We all worked together. The communities, the school district, the county – they all did a great job in making the KOZ work.”

A half dozen years later, ATI has turned its back on all of those sacrifices by workers and community members.

Like the workers, shop owners around the mills are suffering. Aby Shah, manager of the Express Food Mart, across Mile Lock Lane from ATI in Brackenridge, said business was down about 30 percent since the lock out. “The ATI managers did not consider the effect of the lockout on the community,” Shah said.

Bill Hrivnak, whose bar, Ernie’s, is on Brackenridge Avenue just a block from the mill, has also lost business, but like Shah, he displays a sign in his window supporting the Steelworkers. In addition, he drew and posted a sign that says, “No Scab Zone.” He explained, “I don’t approve of ATI bringing scabs in here to take away the livelihood of community people. Everyone thought when they built a $1 billion plant here that it would be great for the community, and it’s not. I am really disappointed with the way they handled things.” 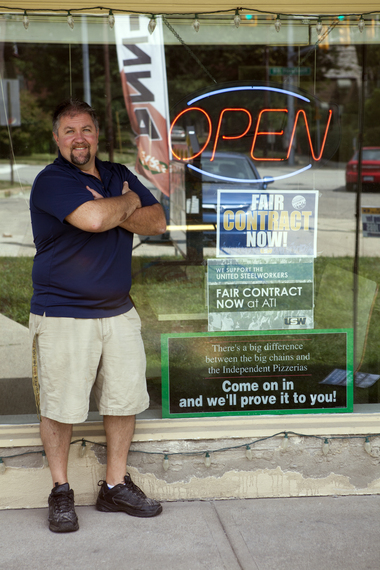 Matt Struhar, who owns Maddio’s Pizza & Subs in Brackenridge, posted several signs supporting the Steelworkers and got guff from ATI managers who said they they’d stop ordering from him for plant meetings. Still, he kept the signs.

Struhar has owned the shop for five years and several of his workers have been with him all of that time – at a pizza shop, where typical turnover is constant. That’s because Struhar values his workers, as he does Steelworkers and the community where he grew up.

“The bottom line is the community needs the union guys to be working. They support our businesses. Without them, we are nothing,” he said. After he wrote on Facebook about his confrontation with ATI managers, union workers from road crews, supermarkets and the local district justice office, as well as bikers and community members flooded his shop with orders to show support.

The community is with the Steelworkers. It longs for Uncle AL to return.