October 30th marks the last day of KillJoy's Kastle, the smartest, arty-ist haunted house to ever grace West Hollywood. The creators of this lesbian feminist house of horrors have their tongue planted firmly in their cheeks (and elsewhere) as they skewer tired tropes and send up everything from wymyn's music festivals to academia, polyamory and the dreaded horror of the moon cup! It's a holey hell! 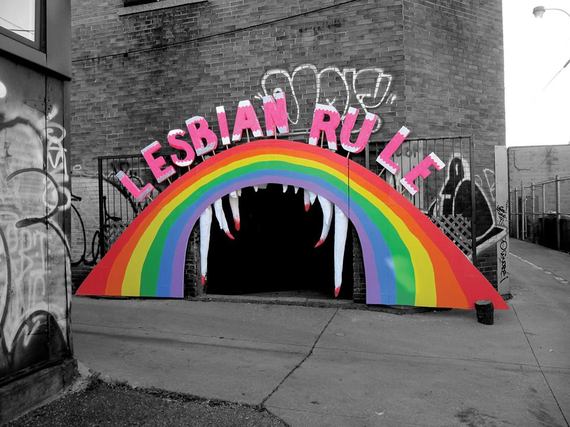 Created by Toronto based-artists Deirdre Logue and Allyson Mitchell, KillJoy's Kastle is designed to pervert, not convert. This haunted house of freaky feminist skill sharing and paranormal consciousness-raising reanimates the archive of lesbian herstory with all its wonders and thorny complications. It's open at Plummer Park, in West Hollywood, Wednesday October 28 through Friday October 30, 6:30 to 9:30. Early arrival is highly suggested as this is a very popular attraction, and has been at capacity since it opened. The tour lasts half an hour, and the waiting area is a blast! KillJoy's Kastle is free, thanks to support provided by the City of West Hollywood through its Arts and Cultural Affairs Commission. Additional support is provided by The Andy Warhol Foundation for the Visual Arts and the ONE Archives Foundation.

I took the tour--yes, you get a "demented women's studies professor" (or if you're lucky, a randy, yet bitter TA)--with performance artist Ron Athey. Currently teaching at CalArts, Ron was was so taken by the herstory and heresy that he bought a commemorative tee shirt in the gift shop. Yes, like all good museums, KillJoy's Kastle channels visitors out in the boutique, whihc is full of witchy, feminist, lesbian and groovy goods. Ron pointed out that there was a lot of feminist art brain power at work in KillJoy's Kastle. And it shows, beginning with the vagina dentata entrance way and the bathrooms labeled Oppressed and Oppressor (I was surprised by my choice of pissoirs; things are not what you may think they seem to be at KillJoy's Kastle), and continuing throughout.

I really don't want to give up the spoilers in this smart, sassy, sexy haunted house, but I will spill the tea that one of the first displays features bored housewives discovering themselves in a way that may not be appropriate for teens and younger (and might surprise people who have only seen Brazilian wax jobs and bald, buffed muffs). Ron and I loved the Daddy Tank where "deviant" butch women were once held away from others in jail; it's very interactive, as are the Riot Ghouls. The straw-feminist art gallery was another high point, as was the graveyard. KillJoy's Kastle is fun, funny, cis-and-straight friendly without compromising its pro-lesbian, sex-positive and trans-inclusive foundations, and a must see for anyone who has an open mind and a sense of humor.

At the end of tour, it's clear that in the drive for political correctness, uptight killjoys have taken the transgressive and sexy fun out being queer, while glossing over the unpleasantries in a drive for moral supremacy. As a countermeasure, KillJoy's Kastle has resurrected the past--the good, the bad and the ugly--and laid it out in a high camp, super-smart, ultimately loving way.

KillJoy's Kastle: A Lesbian Feminist Haunted House originated in collaboration with, and through financial support of, the Art Gallery of York University (AGYU), Toronto. Support for this presentation of the KillJoy's Kastle is provided by the City of West Hollywood through its Arts and Cultural Affairs Commission. Additional support is provided by The Andy Warhol Foundation for the Visual Arts and the ONE Archives Foundation. 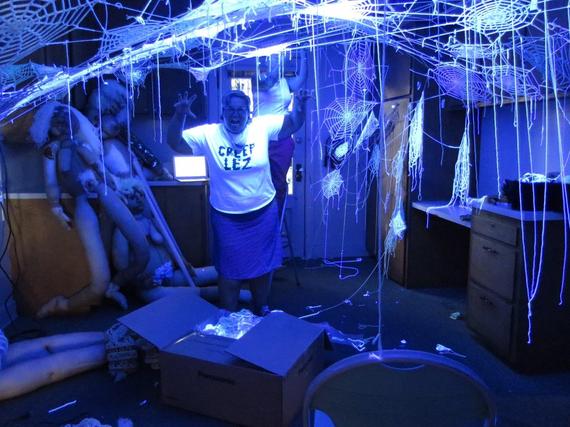