Roaming the halls of traditional art museums, one is bound to have the strange sensation he or she is walking amongst ghosts. And not just any ghosts, but very high class ones. For most of its life, the genre of portraiture has existed to memorialize the rich and powerful in all their puffy-collared glory.

The existence of class hierarchies still exists today, and prominently so in the American South. Working in Charleston, South Carolina, artist Kim Alsbrooks grappled with the pressures imposed by conventional portraiture and its class stratified history. She eventually came to an innovative solution, working within the framework of traditional portraiture while simultaneously subverting the norm. Thus "My White Trash Family" was born. The cheeky series transplants upper class, somewhat stuffy portraits onto canvases made from flattened slabs of garbage, smoothing out class distinctions into a level playing field in one fellow swoop. 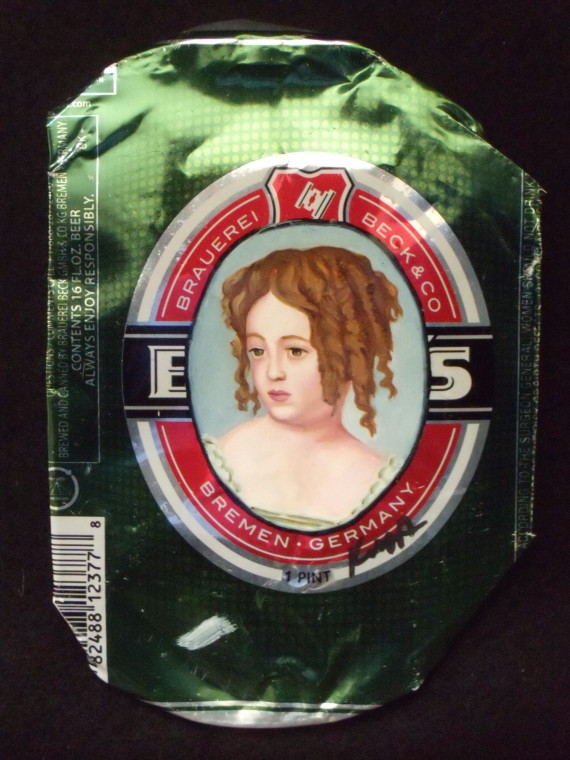 "This body of work expressed a frustration I had with my environment," Alsbrooks explains in the video below. "So I painted all these things that I was technically, as an artist living in Charleston, supposed to paint. It was an interesting social commentary on what we think is important. These beautiful scenes, a social hierarchy. I essentially was saying: 'Okay, I will paint these things, but I'm going to paint them on trash.'"

Alsbrooks crafts jarring juxtapositions of 18th century aristocracy and faded beer cans, yielding mythical family portraits that bring the upper classes down to our level. "The trash is found flat, on the street," Alsbrooks explained to The Huffington Post. "One cannot flatten the trash. It just doesn't work. It must be found so that there are no wrinkles in the middle and the graphic should be well centered. Then the portraits are found that are complimentary to the particular trash... The trash is gessoed in the oval shape, image drawn in graphite, painted in oils and varnished."

The resulting images are recycled altars to the upper ranks, both immortalizing and playfully belittling their subjects. The series, Alsbrooks explains, "communicates the absurdities and meaninglessness of status. How such ideas of status and social well being are common, impermanent and empty of any real substance, exemplified by what they are painted on (refuse) and therefore of groundless by nature. Even now."

We have to admit, imagining the priggish subjects shotgunning a Budweiser isn't a bad bonus. See Alsbrooks' trashy masterpieces below and scroll down for a video interview with the artist.

Statement from Jesse Brass on Vimeo.