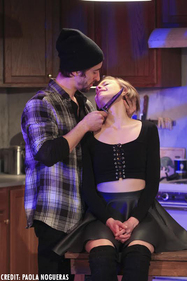 Deborah Block, my daughter-in-law, is the director of Kim Davies's "Smoke," now playing at Philly's Exile Theatre. I was out of town at a conference when the production opened, and I returned to emails and calls describing the play's unflinching, graphic portrayal of sadomasochism as "sickening," "unsettling and frightening," and "unnecessarily ugly and shocking." Some called it "boring." One called it "empty." Another walked out.

As a family therapist, I want to address these reactions in light of expressions I have seen in my practice and the reasons for their appeal. I agree: The relationship depicted in "Smoke" is both shocking and brutal. And at first, the lack of authentic connection between John and Julie, as well as the emphasis on power and control, is boring. And yes, both characters seem empty: the cigarette smoke in their eyes is a metaphor for individual blindness.

However, because the relationship between Julie and John is psychologically accurate, the play offers an exceedingly valuable and brave portrayal of sexual danger. It also offers the opportunity to contrast this danger with control over another that is exciting and positive. Just think of Rhett Butler carrying Scarlett O'Hara up the stairs at Tara.

As for masochism: Let's face it. If women could not endure and at times select pain, we would never choose to give birth. However, for the emotionally deprived, without realizing why, the desire for sexual risk may increase to highly dangerous levels. (Think of Monica Lewinsky's youthful masochistic pursuit and what it cost her.)

"Smoke" shows clearly that risky pursuit compounded by a determination of sexual dominance has complex undertones. At first glance, it seems as if Julie and John meet by chance. But as the play unfolds, we see that Julie has stalked John and will do all in her power to keep him. "Smoke" also shows (actually screams) the importance of a trusting relationship between father and daughter as she is growing up. If a father is rejecting or seductive, he does damage. If he is both, the damage is enormous, as we see in Smoke.

Those who gravitate toward BDSM insist that consenting adults practice these behaviors, and one can always call a halt to any activity. Smoke, however, suggests that calling a halt isn't that simple. In my own practice I have seen scars from knives and burning; bruises from beatings; a man who insisted that his wife be put into the dog collar he brought to our first session in order to show me the "turn on" of making his "slave" behave like "the dog she is"; and a woman who arrived at my office in a rage because her partner refused the use of nails or pins. And more.

Men who, like John, enjoy inflicting pain on women long to find the strength to feel competent and potent, but they are usually clueless about how to achieve it. Julie, his childishly seductive partner, is subconsciously motivated by her rage at her father's cruel treatment of her mother and herself. Her expressed determination to fail at everything has not attracted her father's attention, so she stalks a guy she knows is dangerous and puts herself into harm's way. Hers is a cry for help: Julie longs for the father she never had, one who will show that he cares and will rescue her. Yet, she blindly chooses a man and a plan that may actually kill her. And I assure you, John and Julie are not alone.

This review appeared in the Broad Street Review on March 7, 2016