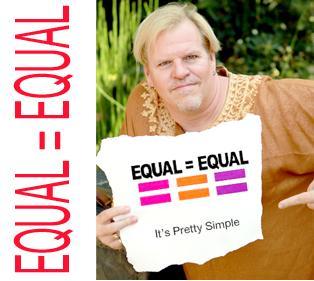 Kim Davis stands firmly in this American tradition of nonviolent protest against laws that appear to her -- and to many others -- to be unjust, because they violate the natural law about sexuality and marriage.

Is there no way to publicly accommodate the citizen who holds these beliefs?

So asks Dr. Joe Loconte, professor of history at The King's College and author of A Hobbit, a Wardrobe, and a Great War: How J.R.R. Tolkien and C.S. Lewis Rediscovered Faith, Friendship, and Heroism in the Cataclysm of 1914-1918, on CNN Monday, September 14, 2015.

Now, here's where the media is falling short, and everyone else in this over politically correct nation because the answer is a resounding No! there is NO place for bigotry in a modern day society.

Kim Davis, by her own admission September 14, 2015 while returning to work, is no hero at all. And as for courage of her convictions, four marriages, children born under dubious circumstances, these are not the actions of a pious woman. But her character notwithstanding, and it's not, it's the insulting argument that in some way she is standing up for what's right, for her beliefs, and the beliefs of others.

Yes, I'm sure when segregation ended there were teachers that didn't mind Blacks being taught, just not in THEIR classrooms. Was there a public space for them? A place for their beliefs? In this country today there are an abundance of anti-semites quick to attack Israel, its existence and the intentions of the Israeli people. Where is the public space in media and in policy for them? There are those that believe two races should not marry, where is their public space? Where is the room in American law for them?

Because we are talking the law here. If Kim Davis really had the courage of her convictions she'd give up her 80k a year job instead of defying the existing law; something that goes against scripture as well but all that's lost on her. I saw her wearing garments of mixed fabric, not purple, either, plus she doesn't accept cattle as payment for the bride any more, so marriage has already been altered and she's already breaking Biblical law.

Kim Davis should not be mentioned in the same article as Martin Luther King Jr, yet SE Cupp and Loconte did just that, "Martin Luther King Jr.'s entire campaign of civil disobedience was based on the belief that citizens owed allegiance to the "natural law" -- a moral law higher than that of any civil authority. As King put it in his Letter from Birmingham Jail: "One has a moral responsibility to disobey unjust laws."

Well, Mr. Loconte and Ms. Davis, same sex marriage is NOT an unjust law and how DARE you compare it, allowing two men or women to marry, to the laws that basically enslaved an entire community; including laws that bred lynchings at church picnics legally and otherwise up until the 1960s. How dare you say Davis is in some way the person King was or that her fight is as valid or just as his. It's an insult to his memory to compare this I don't want any attention but let me say that at a press conference, Mike Huckabee hugging criminal. And a criminal is what she is.

She admitted that the marriage licenses without her signature, the ones that say granted by "Federal Court Order" instead of the county clerk could one day be deemed invalid. How dare anyone after the Supreme Court ruling allow that to happen to couples in America, and last I checked, Kentucky is America.

Please Continue the Article at Karel.Media: Next, Is Davis Still In Contempt of Court and Should She Be Punished?