North Korean television announced in a "special broadcast" that its leader, Kim Jong Il, is dead.

News of Kim's death was made public on Monday, with officials indicating that he actually died two days earlier while riding a train.

Reuters notes that the country had begun transferring power to his son, Kim Jong-un, who is believed to be in his late 20s.

Kim reportedly suffered a stroke in 2008, but appeared relatively healthy on recent trips around Asia, which were documented by state media.

"We are closely monitoring reports that Kim Jong Il is dead. The President has been notified, and we are in close touch with our allies in South Korea and Japan. We remain committed to stability on the Korean peninsula, and to the freedom and security of our allies."

"The President reaffirmed the United States’ strong commitment to the stability of the Korean Peninsula and the security of our close ally, the Republic of Korea. The two leaders agreed to stay in close touch as the situation develops and agreed they would direct their national security teams to continue close coordination."

More from the AP's obituary on Kim:

The communist country's "Dear Leader" -- reputed to have had a taste for cigars, cognac and gourmet cuisine -- was believed to have had diabetes and heart disease.

Kim Jong Il had been groomed for 20 years to lead the communist nation founded by his guerrilla fighter-turned-politician father and built according to the principle of "juche," or self-reliance.

Even with a successor, there had been some fear among North Korean observers of a behind-the-scenes power struggle or nuclear instability upon the elder Kim's death.

Few firm facts are available when it comes to North Korea, one of the most isolated countries in the world, and not much is clear about the man known as the "Dear Leader."

North Korean legend has it that Kim was born on Mount Paekdu, one of Korea's most cherished sites, in 1942, a birth heralded in the heavens by a pair of rainbows and a brilliant new star.

Soviet records, however, indicate he was born in Siberia, in 1941.

Kim Il Sung, who for years fought for independence from Korea's colonial ruler, Japan, from a base in Russia, emerged as a communist leader after returning to Korea in 1945 after Japan was defeated in World War II.

The North invaded the South in 1950, sparking a war that would last three years, kill millions of civilians and leave the peninsula divided by a Demilitarized Zone that today remains one of the world's most heavily fortified.

In the North, Kim Il Sung meshed Stalinist ideology with a cult of personality that encompassed him and his son. Their portraits hang in every building in North Korea and on the lapels of every dutiful North Korean.

Kim Jong Il, a graduate of Pyongyang's Kim Il Sung University, was 33 when his father anointed him his eventual successor.
Even before he took over as leader, there were signs the younger Kim would maintain -- and perhaps exceed -- his father's hard-line stance.

South Korea has accused Kim of masterminding a 1983 bombing that killed 17 South Korean officials visiting Burma, now known as Myanmar. In 1987, the bombing of a Korean Air Flight killed all 115 people on board; a North Korean agent who confessed to planting the device said Kim ordered the downing of the plane himself.

Kim Jong Il took over after his father died in 1994, eventually taking the posts of chairman of the National Defense Commission, commander of the Korean People's Army and head of the ruling Worker's Party while his father remained as North Korea's "eternal president."

He faithfully carried out his father's policy of "military first," devoting much of the country's scarce resources to its troops -- even as his people suffered from a prolonged famine -- and built the world's fifth-largest military.

Kim also sought to build up the country's nuclear arms arsenal, which culminated in North Korea's first nuclear test explosion, an underground blast conducted in October 2006. Another test came in 2009.

Alarmed, regional leaders negotiated a disarmament-for-aid pact that the North signed in 2007 and began implementing later that year.

However, the process continues to be stalled, even as diplomats work to restart negotiations.

North Korea, long hampered by sanctions and unable to feed its own people, is desperate for aid. Flooding in the 1990s that destroyed the largely mountainous country's arable land left millions hungry.

Following the famine, the number of North Koreans fleeing the country through China rose dramatically, with many telling tales of hunger, political persecution and rights abuses that officials in Pyongyang emphatically denied.

Kim often blamed the U.S. for his country's troubles and his regime routinely derides Washington-allied South Korea as a "puppet" of the Western superpower.

U.S. President George W. Bush denounced North Korea as a member of an "axis of evil" that also included Iran and Iraq. He later described Kim as a "tyrant" who starved his people so he could build nuclear weapons.

"Look, Kim Jong Il is a dangerous person. He's a man who starves his people. He's got huge concentration camps. And ... there is concern about his capacity to deliver a nuclear weapon," Bush said in 2005.

Kim was an enigmatic leader. But defectors from North Korea describe him as an eloquent and tireless orator, primarily to the military units that form the base of his support.

The world's best glimpse of the man was in 2000, when the liberal South Korean government's conciliatory "sunshine" policy toward the North culminated in the first-ever summit between the two Koreas and followed with unprecedented inter-Korean cooperation.

A second summit was held in 2007 with South Korea's Roh Moo-hyun.
But the thaw in relations drew to a halt in early 2008 when conservative President Lee Myung-bak took office in Seoul pledging to come down hard on communist North Korea.

Disputing accounts that Kim was "peculiar," former U.S. Secretary of State Madeleine Albright characterized Kim as intelligent and well-informed, saying the two had wide-ranging discussions during her visits to Pyongyang when Bill Clinton was U.S. president.

"I found him very much on top of his brief," she said.

Kim cut a distinctive, if oft ridiculed, figure. Short and pudgy at 5-foot-3, he wore platform shoes and sported a permed bouffant. His trademark attire of jumpsuits and sunglasses was mocked in such films as "Team America: World Police," a movie populated by puppets that was released in 2004.

A South Korean film director claimed Kim even kidnapped him and his movie star wife in the late 1970s, spiriting them back to North Korea to make movies for him for a decade before they managed to escape from their North Korean agents during a trip to Austria.

Kim rarely traveled abroad and then only by train because of an alleged fear of flying, once heading all the way by luxury rail car to Moscow, indulging in his taste for fine food along the way.

One account of Kim's lavish lifestyle came from Konstantin Pulikovsky, a former Russian presidential envoy who wrote the book "The Orient Express" about Kim's train trip through Russia in July and August 2001.

A Japanese cook later claimed he was Kim's personal sushi chef for a decade, writing that Kim had a wine cellar stocked with 10,000 bottles, and that, in addition to sushi, Kim ate shark's fin soup -- a rare delicacy -- weekly.

"His banquets often started at midnight and lasted until morning. The longest lasted for four days," the chef, who goes by the pseudonym Kenji Fujimoto, was quoted as saying.

Kim is believed to have curbed his indulgent ways in recent years and looked slimmer in more recent video footage aired by North Korea's state-run broadcaster.

His eldest son, Kim Jong Nam, 38, is believed to have fallen out of favor with his father after he was caught trying to enter Japan on a fake passport in 2001 saying he wanted to visit Disney's Tokyo resort.

His two other sons by another woman, Kim Jong Chul and Kim Jong Un, are in their 20s. Their mother reportedly died several years ago.
____

Watch the announcement being made on North Korean television: 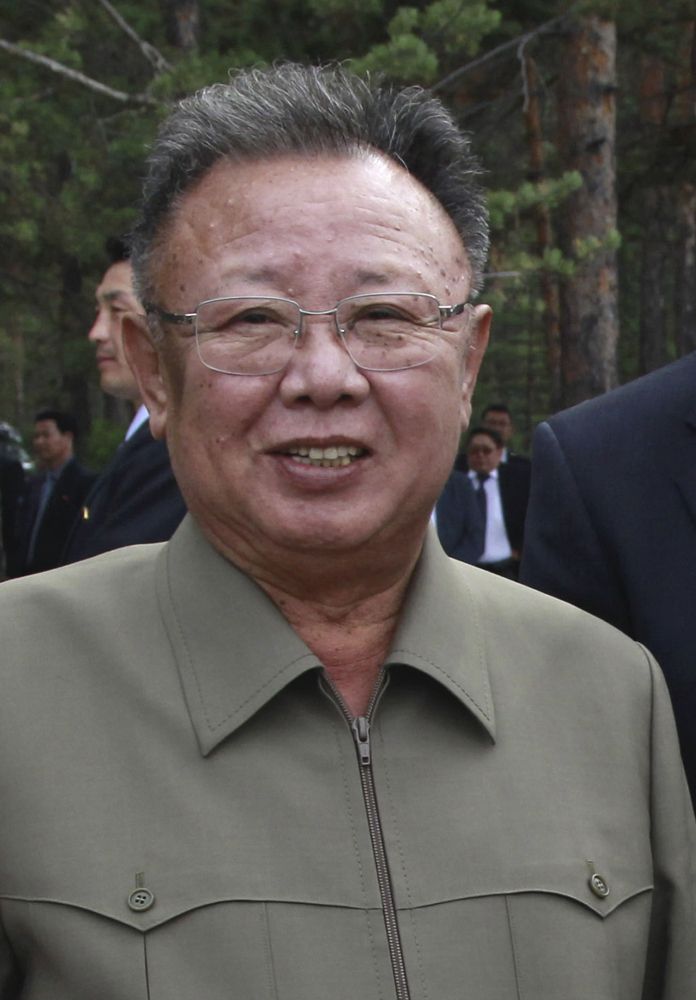