You knew Kim Jong Il was a murderous autocrat who indulged his appetites for fine food and other luxuries while his people starved, but did you know he was an "average doubles badminton partner" who had "813 children"?

Those are just two of the "revelations" contained in a sure-to-be-controversial statement issued by General Aladeen, the North African despot portrayed by Sacha Baron Cohen in the upcoming comedy "The Dictator." The statement, obtained exclusively by The Huffington Post, marks Kim's death with a special expression of gratitude for all the late leader did to "spread compassion, wisdom and uranium throughout the world."

This is not the first time Cohen has blurred the lines between fiction and reality while promoting a film. His previous alter egos Ali G, Bruno and Borat all made real-life appearances, stirring up confusion -- and buzz -- in advance of opening day.

Read on to find out just how much General Aladeen will miss his "dear friend" Kim Jong Il -- or, as he prefers to remember him, "K-Jo." 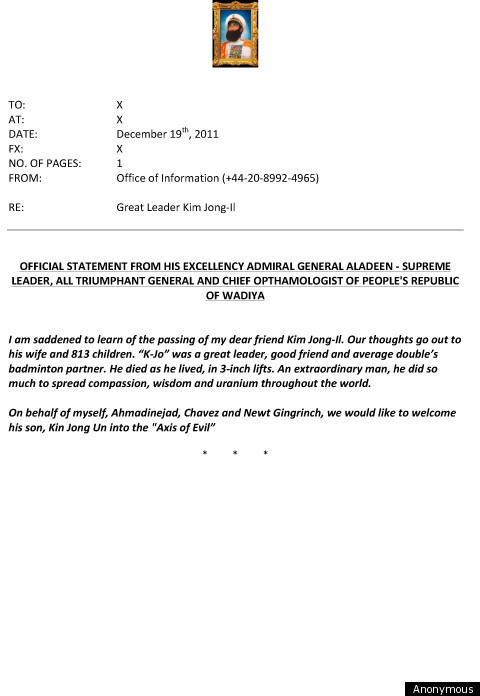