Kim Kardashian has been accused of MURDER, everybody. Murder of a video game. But she is innocent. Innocent, I say!

The victim is Candy Crush, the super-fun game of, um, crushing candy that simply everybody was playing in August... of 2013. The crime scene is the New York Stock Exchange, which was splattered on Wednesday with the blood and guts of Candy Crush maker King Digital, whose shares were down 24 percent shortly after the opening bell. It turns out that not quite everybody is playing Candy Crush any more, and King Digital hasn't yet come up with a new game that everybody wants to play.

So who killed Candy Crush? According to this Business Insider headline, Kim Kardashian done it. The BI story is about a fairly dull Deutsche Bank analyst note that mentions Kardashian's ridiculously popular app, Kim Kardashian: Hollywood, as one competitor for Candy Crush. The note says the game 2048 is another competitor, but the headline "2048 Is Killing Candy Crush" is not nearly as clickable. (Believe me, I am not hating: This is how the headline game is played. When you can put Kardashian in a headline, you do it.)

Deutsche Bank points out that Candy Crush is a ridiculously expensive game (if you go for its in-app purchases to keep the game going). But then so is Kim Kardashian: Hollywood, which makes an estimated $700,000 a day from in-app purchases, on its way to an estimated $200 million for the year. It is so expensive that parents are calling Kardashian & Co. "vile scumbag pigs" and Kardashian has been forced to defend it.

Aha, you might be saying, here is more proof that Kardashian is the murderer: All of the life-giving moneys are going to her instead of to Candy Crush. But I submit to you, ladies and gentlemen of the jury, that Candy Crush was dead long before Kardashian arrived.

Exhibit A: Look at how the air started hissing out of the Candy Crush bubble a year ago:

Exhibit B: When King Digital priced its IPO in March, people were already declaring it over. Here's a particularly brilliant piece of analysis that AV Club's John Teti wrote at the time:

King, the future one-hit wonder responsible for the cellular telephone game Candy Crush Saga, announced today that it will pretend to be worth up to $7.6 billion before the studio inevitably collapses.

The Candy Crush firm may be taking notes from its competitor Zynga, which is in the more advanced “collapse” stage of the game-studio collapse cycle after executing its hilarious “People will never get tired of FarmVille” strategy to perfection.

King's IPO priced at $22.50 and promptly collapsed at the opening bell on its first day of trading in March. It has hit that IPO price just once since -- just one opportunity in almost five months for people who bought the stock at the IPO price to cut their losses. 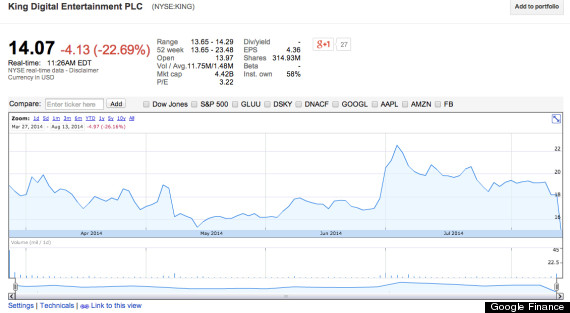 The stock was just above $14 a share on Wednesday.

If the stock price is for shit, you must acquit. (In other words, Kim Kardashian is innocent.)