Kim Kardashian covers the new Shape in a bikini and in the interview she talks about her breasts, cellulite, diet and workout regimen. Here are some excerpts, scroll down for the photo.

On working out:
"It probably sounds weird, but for me, there's nothing better than getting up and going right to the gym. I have cellulite, just like almost every other woman on the planet. And just because I feel secure with my body doesn't mean I think cellulite is cute! It will always be an issue for me. So let's just say it's a work in progress!"

On unflattering bikini pics that surfaced last summer:
"Yeah, it bothered me initially, but I told myself that everyone, especially women with curves, has issues just like mine. But it did motivate me to finally drop those last 10 pounds. Before, all I'd have for breakfast was a grande soy chai latte. Now it's either oatmeal with bananas and blueberries or scrambled egg whites with tomatoes, mushrooms, and onions, a side of turkey bacon, and a scoop of cottage cheese." She's also eliminated old favorites, like cheese-smothered enchiladas and cheeseburgers with onion rings. "I wouldn't dare eat like that now," she says. "These days I prefer salads with grilled chicken or turkey burgers without the bun."

On being an early bloomer:
"I was only 10 when I started developing breasts. I remember crying in the bathtub. I took a washcloth, made it really hot, put it over my chest, and prayed, 'Please don't let them grow any bigger! They're embarrassing me!' I was the first girl in my class to wear a bra. And Kourtney would taunt me and tell all the boys, 'Kim has such big boobs!' I hated it!"

Kim seems to have left her body insecurities well behind her. She has tweeted bikini pictures of herself multiples times in recent months and posed nude for Harper's Bazaar in April. 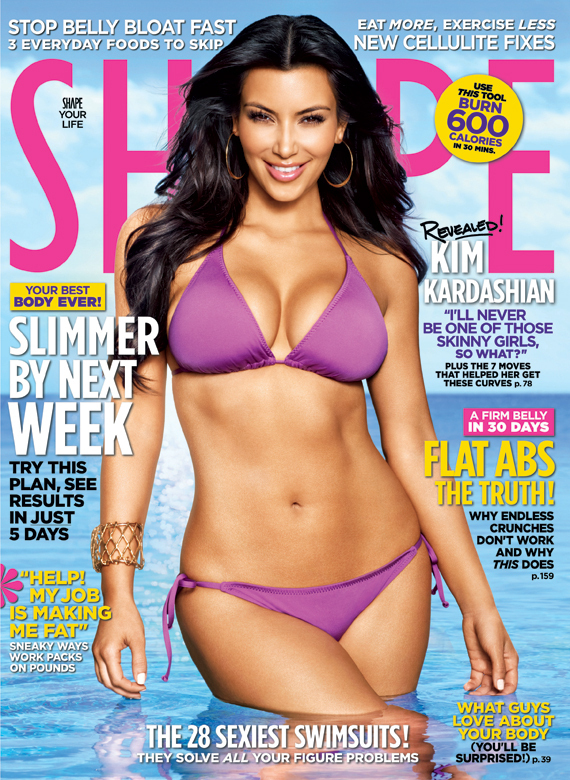