I spent a couple of hours playing Kim Kardashian's newly released iOS game, "Kim Kardashian: Hollywood," and all I learned is that the quest for fame and fortune -- specifically when you don't have actual talent -- is tedious and exhausting.

It's fitting that the goal of the game is to rise from a lowly store clerk to a bonafide celebrity by gaining fans and working your way up from the E- to A-lister status -- because who knows the ropes better than Kim Kardashian?

After downloading the (thankfully) free game on my iPhone, I was able to customize an avatar to vaguely resemble myself, and begin my journey to stardom. After working a shift at the So Chic boutique, adjusting mannequins and folding shirts, my avatar finally got to lock up for the night. Who should appear then but Kim K of course, asking if the store was still open. (Of course! Anything for you, Kim.)

After hooking Kim up with a hot red dress (that I had to insist on not charging her for), she invited me along to a photo shoot. Of course she tells me to wear something "dressier" than my old crop top and jeans, and I changed into a body-hugging white cut-out dress, that Kim actually wore on a date night with Kanye back in October.

Players gain fame by completing tasks, so after helping out at Kim's photo shoot, she set me up with a manager, who later hooked me up with a publicist. During the course of the game I'm introduced to various models, moguls, paparazzi and more people who can allegedly help me on my journey to the A-list. I'm repeatedly asked if I want to either flirt with or network with any of these people, and each choice affects my future. Later, Kim tells me that one way to gain fame is to date other famous people. Because, duh. 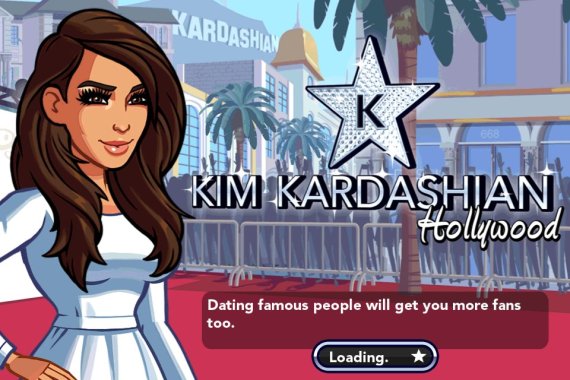 One progressive aspect to the game is that my avatar was actually asked which gender I was interested in dating, before I met up with a male model of Kim's choosing. 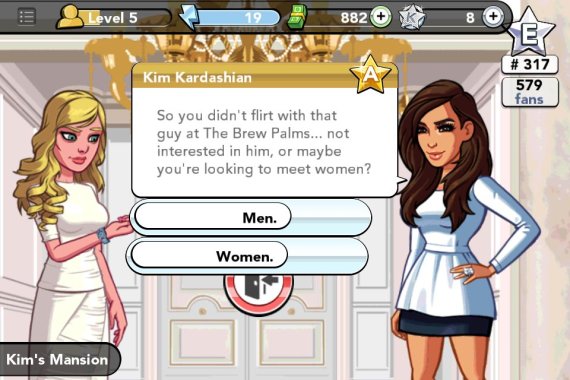 Over the course of the couple hours I played the game, my avatar did three photo shoots, walked a runway show, worked two shifts folding clothes, started a feud with another celebrity wannabe, went to a club opening in Miami and threw a drink in said wannabe's face, was photographed by the paparazzi and took the bus between Downtown LA, Hollywood, Beverly Hills, and LAX dozens of times. (Why my avatar wasn't practical enough to save for a car while living in Los Angeles is beyond me).

When all was said and done and I could no longer stand all the phone calls from my manager Simon telling me a gig materialized, I was exhausted. Yes, trying to get famous while having no talent is really tiring. That also might explain why my avatar was repeatedly told that I didn't have enough energy to finish my tasks, and was asked if I wanted to purchase -- with real money, naturally -- more stars that would give me energy. (You didn't think a Kardashian would put out a game that was completely free, did you?)

In the end, the constant travel and repetitive nature of the fame game itself -- coupled with my avatar's lack of energy (aka my lack of willingness to shell out actual cash on the game) -- kept me from ascending to the top of the A-list. But you know what they say, it takes money to make money. Which is something the Kardashians know all too well.

Perhaps what is saddest about the game in general is how much it likely mirrors Kardashian's own life, with an endless string of photo shoots, promotional duties and club openings. It's a reminder of exactly what she has to do every day to make sure the world still knows she exists.