Kim Zolciak has confirmed the pregnancy rumors, telling Life & Style she and her 25-year-old footballer boyfriend are expecting their first child together.

Earlier this year Kim claimed she was in a lesbian relationship with Tracy Young, her 'Tardy for the Party' collaborator. Last month Tracy told Star magazine that Kim asked her to help raise her unborn child then reneged when her boyfriend came back into the picture.

Life & Style can exclusively reveal that Real Housewives of Atlanta star Kim Zolciak and boyfriend Kroy Biermann are expecting their first child together! "I was surprised!" Kim, 32, tells Life & Style about the pregnancy. "While it wasn't planned, God clearly has a bigger and better plan for us and we're excited."

At first, Kim denied reports that she was pregnant when a jealous ex leaked the news back in October. "I was appalled and disgusted by that," she says. "I wasn't through my first trimester - you never know what could happen."

But now Kim is three months pregnant and ready to share the wonderful news, telling Life & Style: "I'm the happiest I've ever been."

Kim, who has two daughters from a previous marriage, Brielle, 13, and Ariana, 9, has been dating Kroy since May - viewers saw her meet the 25-year-old Atlanta Falcons defensive end on the Nov. 14 episode of Housewives. "He makes me a better person," says Kim. "I love everything about him."

The couple has yet to find out the sex of the baby, but boy or girl, Kim can't wait to start a family with the football star. "I definitely don't want to get married while I'm pregnant," she says. "But I can see myself marrying Kroy in the future."

Watch Kim on The Real Housewives of Atlanta Sundays at 9 p.m. on Bravo and download her single, "Google Me," on iTunes on Nov. 30.

For more from Kim on her pregnancy, pick up this week's issue of Life & Style, on newsstands now. 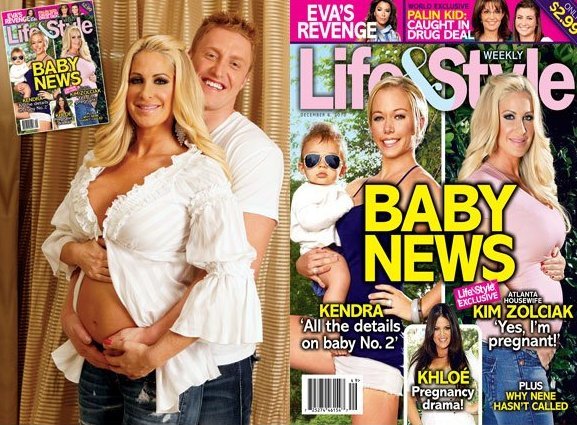