Kim Zolciak talks about her recent boob job correction/nipple moving procedure in the new issue of In Touch. The magazine's press release follows; scroll down for photos.

Looking at pictures of herself on vacation in Miami four months ago, Kim Zolciak couldn't believe what she saw. "My boobs looked crazy and saggy," she reveals to In Touch in an exclusive interview. So, Bravo's Real Housewives of Atlanta star had three hours of surgery to replace the saline implants she'd gotten at age 20 with lighter silicone ones. Though she was thrilled with the results, Kim had to go back under the knife once more after tearing some of her stitches. Now healing and happier than ever, Kim, 32, says, "I love my new boobs. They're so perky. I feel fantastic!"


So the initial surgery went okay?

It went great. I had my nipple moved up half an inch, so my boobs were lifted without having a scar from the nipple to underneath the breast.

I went to the Bahamas with Kandi, Sheree and our kids eight days after the procedure. I went down a water slide and tore some of the stitches.

Ouch! Were you okay?

I felt a sharp pain in my left breast but didn't realize how serious it was until the bandages came off and there was a tear around my nipple. I had to go back to get it fixed.

Will you have more surgery in the future?

I'd like to do a tummy tuck at some point to get rid of a few stretch marks.

Danielle Staub has also gone public about her boob job revision, allowing cameras to follow her into the doctor's office. 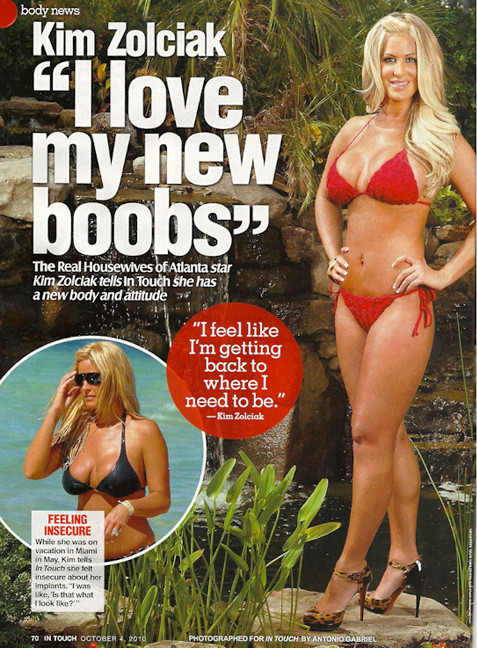 Here is Kim last year, before getting her nipples moved: