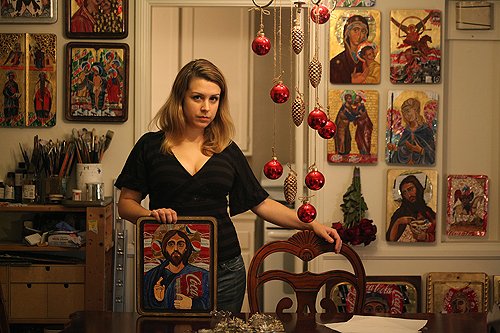 Kimberly Zsebe amongst her Icons Series in Los Angeles. (Image by EMS)

I first met artist Kimberly Zsebe at Charity Burnett's Sangria Fine Arts in Encino, a social mixer and micro gallery that Burnett throws from time to time. I admit that I was quickly enthralled by Zsebe's quiet demeanor and confidence. It's easy to become infatuated by her "Moulin Rouge" vintage looks and old-Hollywood retro style, a style more towards a Wong Kar-Wai or Baz Luhrmann film. It's important for me to mention Zsebe's style, because when she enters a room, people's heads turn. I've seen and witnessed this every time I've been with her in public. If it's true that an artist can become a piece of art themselves, then Zsebe is evidence of that. 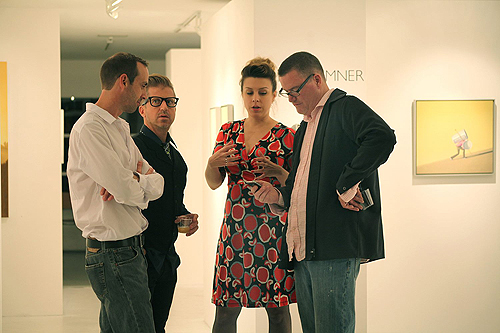 My parents met in the late 1960s during the war in Southeast Asia. My father was a Lieutenant Colonel in the Army and my mother a diplomatic English translator. Since I am a product of the Vietnam Conflict during that era, I may have a sense of what French Indochina may have been like from the stories of their parents who have now passed on. It is through my own filmmaking fantasies that I envision the kind of roles my artist cohorts could play if we weren't engulfed in the art scene, but in Hollywood itself. 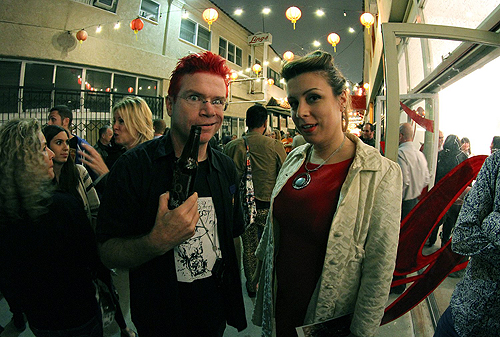 Kimberly Zsebe with Mat Gleason in Chinatown. (Image by EMS)

One night I ran into Kimberly at an art opening in Chinatown. It was as if she just walked off the set of a political thriller between the French and Ho Chi Minh set in 1945 Hanoi. I could humor myself with these fantasies all day long on these art scene characters I constantly rub elbows with and burn gigs of flashcards on. Most importantly, though, is Zsebe's talent for art. 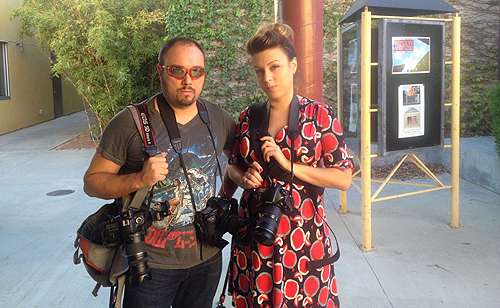 If you are lucky enough to meet Wisconsin-native Kimberly Zsebe, you will be impressed by her easy-going charm, political acuity, keen art knowledge and the fact that she knows more about the nuts and bolts of camera equipment than any Brooks graduate I know. There's a quiet maturity about her unlike a lot of artists and creative types who wear their egos on their shoulders. With Zsebe I recall the lyrics to my favorite singer/songwriter Van Morrison... "No Guru/ No Method/ No Teacher."

When I courted her for a film, we had a remarkable six-hour conversation ranging from Van Halen, to passing kidney stones, to using egg tempura. It was through this conversation that I felt privileged to document a short film on Zsebe quietly working on her Icons Series at her mid-city Los Angeles house.

In this film, Zsebe fuses religious iconography with contemporary pop-culture commercialism to craft a realistic satirical indictment of our current cultural milieu. Getting to know Zsebe is to find she is as cerebral as she is talented. As most artists use their work as a means to escape the realities of life or make sense of it, Zsebe listens to CNN in the background as she works. Perhaps it is the reality of the time and space that we're living in that motivates her work. Zsebe is not overtly political -- but don't get her started. She even went so far as to threaten me with bodily harm if the recent election went the wrong way. Of course, she was joking... I think (since I never got one of her typical chuckles when she's being funny or acknowledging someone else's joke).

As for her politics I'll let her tell you, but what really lies in Zsebe's soul is a wit for fashion, art and fun with a Poker face. 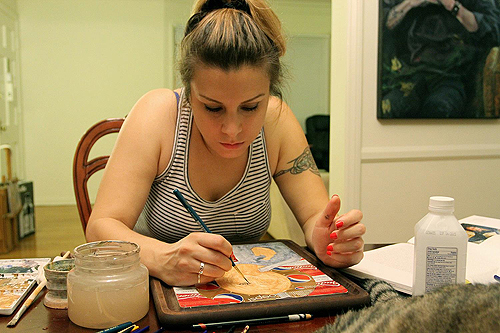 It was Charity Burnett who once told an artist in front of me that an Eric Swenson film "will put you on the map." Whether that's the case or not, it's the least I could do in filming a talented-emerging artist who does not come across as annoying or needy. She has a confidence and coolness about her such that one can potentially have a six-hour skull session with on anything and everything. Zsebe is yet to be a household name in the art world, but this iconoclast is only on the way up. Everyone who knows her speaks highly of her work, and in a world of hyper-sensitivity, ego-driven narcissistic mania and self loathing angst, Zsebe quietly paints and paints and paints.

No guru. No method. No teacher.

At the conclusion of filming Zsebe and moving on in life, looking back I can honestly say that I spent four quiet nights with Kimberly Zsebe.