Ain't no party like a kimchi party. Seriously. Once a year in Korea, communities spend an entire day (and sometimes longer) making kimchi together. The special day is called Gimjang. It's the tradition of preparing fermented vegetables, and it happens nation-wide during November and December to preserve a boatload of vegetables for consumption in the winter months.

This kimchi party typically consists of Korean women who gather together for the labor-intensive process of preparing kimchi. The tradition -- and the dish itself -- is centuries old and formed out of necessity: Before electricity and modern-day specialized kimchi refrigerators, people would harvest the last of the season's vegetables and preserve them in a salty brine to ensure they could eat them throughout the winter. The kimchi is stored underground in special earthenware, sometimes in creeks and wells, to maintain a consistent temperature. Now, the cooling wells aren't a requirement, but the dish remains a staple in Korean cuisine. 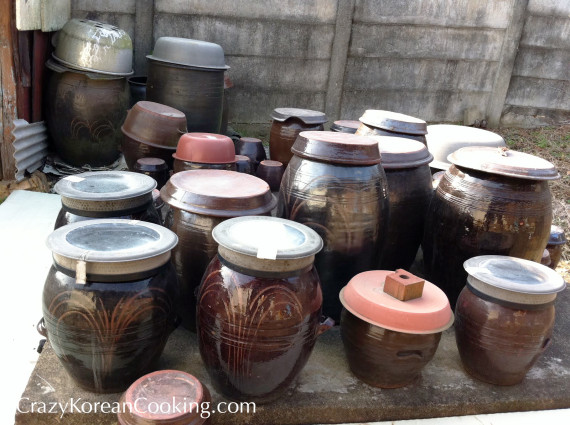 Earthenware that keeps kimchi at the proper temperature during the winter months.

Stephanie Maing and Grace Park, the cooks behind Crazy Korean Cooking and makers of kimchi ingredients and specialized fermentation containers, grew up in Korea and have fond memories of Gimjang. Both currently live in North America.

"It's a lot of work, but they sort of make a party out of it," Maing, who grew up in Seoul, told HuffPost over the phone. While Gimjang is a happy custom and results in fruitful eats, the actual process of making kimchi -- especially in such large quantities -- isn't exactly a picnic. Maing was too young to participate in the grunt work, but she says she feels nostalgia for the tradition itself.

"Women get together on the floor early in the morning, peeling garlic, grinding up 70 to 80 cabbages. It's hard labor but they have conversation and are always laughing," she said. "I remember hearing lots of laughter and gossiping. My mom would always make the best out of it. It's sort of a beautiful thing." It all sort of sounds like a knitting circle.

Maing says that the tight city space wasn't ideal for enormous gatherings or spreads of ingredients, but the community made it work. "I remember each neighborhood would take turns," she added. "All these neighborhood women would gather together to Gimjang." The women would alternate hosting Gimjang, and by the end of a week or so, every family would have a copacetic amount of food to last the cold season.

Park recalls feeling antsy in a kid-waiting-to-lick-the-spoon kind of way. "After they were finished, you'd get a bite of fresh kimchi. It wasn't fermented yet and it was so good," she said. "It was the best part." 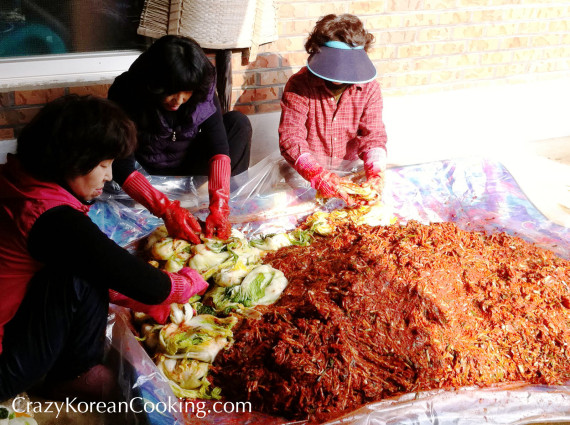 It is customary to prep Gimjang on the floor -- the women deal with a volume of vegetables, spices and a ton of garlic. "You do everything sitting on the ground, you squat while doing it," Park explained. "There wouldn't be room on the counter and the kitchen's way too small."

Depending on the group, the day can sometimes consist of brining and washing hundreds of heads of cabbage. "You have to wash pretty thoroughly," Maing said. "You make a huge batch of seasoning, then put it between the layers of cabbages."

A group of women gathered on a living room floor during Gimjang.

This practice may read foreign to Western eyes, but there's at least one experience with some cross-cultural resonance. "For daughters-in-law, it’s kind of like hell," Park half-joked. "You have to do a lot of work." The classic trope of overbearing mother-in-law dictating the Christmas dinner menu immediately comes to mind.

Another commonality is the strong connection people tend to have with food that's homemade. In the same way I believe my dad's latkes deserve to be trademarked, Korean children and families feel a sense of pride about their family's "brand" of kimchi. “Our neighbors exchanged some kimchi after the annual Gimjang, but my mom’s was, and still is, the best,” wrote travel blogger Juno Kim in a reflection about a Gimjang weekend.

All that work seems a bit excessive, if not outdated; both technological and agricultural advancements have made the process less of a necessity. Special kimchi refrigerators -- which Maing says her mother refers to as her "baby" -- devalue the primitive technique of storing kimchi in earthenware in the ground. Perhaps women continue to break their backs, squatting over pungent vegetables for tradition's sake -- to honor the family members who cooked decades before them.

Or maybe that's romanticizing the grueling activity. Maybe it's just because Korean families expect kimchi at every meal. As Maing puts it, "Koreans cannot live without kimchi, so it has to be done."