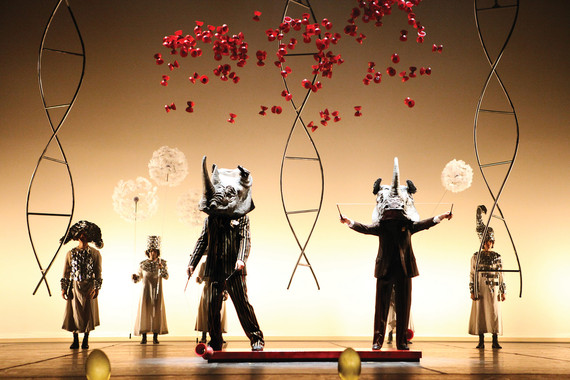 Shh! Don't tell New Yorkers but the Philadelphia arts scene now rivals New York thanks in large part to the leadership of the Kimmel Center. No less an authority than the luxury magazine Departure has declared that "the City of Brotherly Love gives New York a run for its money." Soon, Frank Sinatra will be forced to rise from the dead and do over "New York, New York" as "Philly, Philly".

This year's highlights included the Philadelphia International of the Arts (PIFA), national touring company of the Broadway show "Beautiful," upcoming performance of the Shanghai Acrobats of the Republic of China, and North American premiere of "The Bodyguard.". The 3rd biannual PIFA sponsored 60 arts events over 16 days with more than 160,000 people attended. The highlights included "Article 13," an awe inspiring fire and water spectacle created by a partnership of a Mexican theater company, French artists collective, and the local immigrant community, and a street fair that featured North African street performers and Lady Pneumatica, a 40- foot- tall music playing robot.

At the recent annual meeting of the Kimmel Center, the president and CEO, Anne Ewers, announced "that for the 7th year in a row, we have ended our year in the black. This means for seven straight years we have closed the fiscal year with a balanced budget." The Kimmel Center's fiscal soundness is an incredible achievement considering that many arts institutions have closed or been forced to merge in the last decade. She admitted it wasn't so easy and discussed some of the juggling done by the staff to keep the center in the black. "A snowstorm closes a show- we pivot, a grant or a visa to bring an artist in isn't granted- we pivot, sales just weren't what we planned for a show- we pivot," explained Ewers.

In a city with a population of 1.5 million, the Kimmel Center attracts more than 1 million people visitors annually. Two popular programs, the Broadway Series and Kimmel Center Presents, account for 30% of the attendance. While some have previously criticized the arts institutions in Philadelphia for being too stuffy and elitist, the Kimmel Center has made great strides in their outreach to the African American and Latino communities. They have launched partnerships for pre-concert discussions with urban radio station WURD and Hispanic newspaper Al Dia. Last year, 11% of the audiences were African American while 4% were Latino. The percentage of minority attendance at PIFA was triple that.

Ewers reported donations increased 5% last year. This has allowed the center to continue to fill the void, created by draconian cuts in funding for the arts at local public schools, by offering educational and community outreach programs. In 2015, more than 160,000 people participated in these programs: many of which are free. One of the most highly acclaimed is the Showstoppers Musical Theater Program, which is a free after school program for high school students in grades 9 thru 12 that are passionate about the arts. Renowned professional artists with teaching experience instruct the students in theater, dance and music. Ewers could have talked for hours about the impact of this program on the lives of the student participants. Instead she wisely chose to have Shafiq Hicks, a participant in the program, show us by singing a moving version of "If I Can't Love Her" from "Beauty in the Beast". 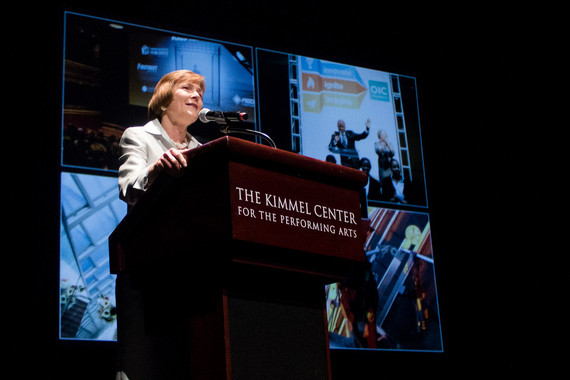 Another popular educational program is Broadway Dreams, a week long summer school for students in grade 9 to college that is taught by Broadway professionals. The Kimmel Center doesn't just train and support young artists. They also thank the public school teachers, who teach the budding performers all year long, by giving away 1000 free tickets annually and offering them discounts on tickets.

The Kimmel Center was one of the producers of the Tony Award winning musical "American in Paris," which is coming to the Academy of Music on November 22 thru 27. One of the new initiatives announced was their plans to become more involved in producing shows.

As the annual meeting was wrapping up, the staff did not have to rest because they were busy preparing for the next day's Open House. It is a free event for the community to preview the upcoming season.