If you look at the curricular history of the United States you will see that our nation's educational focus has been greatly affected by the tenor of the times. In the early 20th century we sought efficiency in learning while the nation was industrializing. We were inspired by the Great Depression of the 1930s to study problems of society and democracy. The 1950s saw a renewed focus on American history and civics as the Cold War heated up. In the 1960s we frantically scrambled to fund math and science education when the Soviets launched Sputnik. The "rigor" era was born in the 1980s as the United States struggled to keep up with imports from Asia. "Rigor" lived on through the focus on educational standards in the 1990s and our infatuation with "accountability" in the 2000s. In many ways the 2010s are a reaction to the Great Recession of 2008 as "college and career ready" has become our mantra.

When America stares into the mirror of education, we see our societal self staring right back.

So when I looked into that mirror this week I was particularly disturbed by the image staring back in the form of a story about a kindergarten show in New York that was canceled so that the students could continue to work towards becoming "college and career ready."

In the letter, the school's interim principal explains:

The reason for eliminating the Kindergarten show is simple. We are responsible for preparing children for college and career with valuable lifelong skills and know that we can best do that by having them become strong readers, writers, coworkers and problem solvers. Please do not fault us for making professional decisions that we know will never be able to please everyone. But know that we are making these decisions with the interests of all children in mind.

Holding the language of this letter up to our education mirror provides a reflection of what we have come to value in American schools. For example, the suggestion that the show was canceled so the students can focus on "valuable lifelong skills" suggests that skills learned while practicing and performing a show are definitively less valuable and timeless. The letter also parrots the rhetoric of "college and career readiness" by stressing the importance of becoming "strong coworkers," presumably inferring that time spent in preparation for a show today will somehow have a negative effect on performance reviews 25 years from today.

"Did you hear that Cooper was fired last week? Third negative review in a row. He's down at the bar drinking and mumbling something about rehearsing to be a skunk." 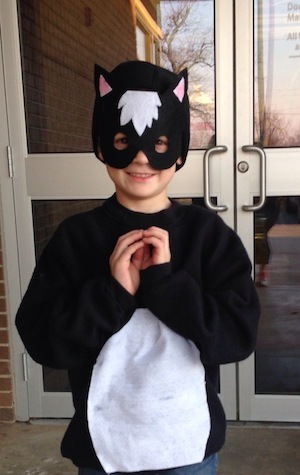 You might also notice that the letter uses the word "professional" instead of "educational" to describe the nature of their decision. Perhaps they believe there is great educational value in working together to sing, dance and perform, but far less professional value unless one plans to make a career of it. It's also hard to miss the autocratic and businesslike tone of the letter. This was not a democratic decision made with input from parents or students, it was made unilaterally by the administration. Parents, teachers, and students must simply live with it. Finally, the principal writing the letter argues that this decision is in "the interests of all children" as though there is a one-size-fits-all approach to educating kids -- one that apparently does not include frivolity or fun.

C'mon Endacott, you're blowing this out of proportion! This is just an isolated incident right? Well, I can't say for sure that other shows around the country are being canceled so that Kindergarteners will be better prepared for Monday's conference call in year 2039. However, I can say that research shows that kindergarten is skewing farther away from being a children's garden (translation) as teachers prepare students for standardized tests.

A study by Daphna Bassok from the University of Virginia found that teachers in kindergarten are spending substantially more time on tested subjects. From the article:

Consistent with our hypotheses that a heightened focus on tested academics may crowd out other types of learning experiences, we find that time spent on subjects that are not tested as part of NCLB (social studies, science, music, art and particularly P.E.) has dropped... Our results clearly demonstrate that today's kindergarten classrooms focus on more advanced academic content, are more literacy-focused, and rely more heavily on teacher-directed whole group instruction... For instance, kindergarteners in the later period are exposed to much less PE, science and social studies and much more standardized testing.

On that note, let's drop the pretense that canceling this show is really about "college and career readiness." It's about tests. You know it, I know it, and the school that canceled this show knows it. What do you see when you look in the educational mirror and see a nation that endorses a testing regime that leads to the cancellation of kindergarten programs so that students can prepare for standardized tests... sorry, college and career?

I see a nation that needs to look critically at whether or not this is what is best for our kids. Our national "failures" have long been blamed on our public schools, but could these claims simply be an attempt to avoid looking deeper into our society's reflection? Was the failure to launch a satellite before Sputnik really because the Soviets had better math and science programs than the United States? Did the Soviets really do ANYTHING better than we did? Do you know what Sputnik did? It beeped. That's it. It circled the Earth and beeped. Twelve years later we put a man on the moon and we did it with graduates from the same American schools that were considered horrible a decade before.

Were Japanese cars and electronics really superior to our Chryslers and Zeniths because American schools did not prepare students for global competition? If you can blame the Pinto, Gremlin, or Pacer on teachers with a straight face, then more power to you. The business sector has mastered the art of shifting responsibility for their lousy ideas to our schools. But do you know what country leads the world in patents issued since World War II? We do. That's right, our lousy American public schools have been cranking out more innovative thinkers than any other country over the past 70 years, and Ford now ranks with Toyota and Honda in terms of quality.

What about the housing bubble that destroyed our economy in 2008? Are our schools to blame for the Wall Street greed, government deregulation, and predatory lending practices that led to the Great Recession? Hardly, but thanks to a nifty diversion by the federal government, testing companies and wealthy venture philanthropists we are now using that recession as a reason to take even more of the "American" out of our American public schools.

I say that because Kindergarten music programs are what Americans do. We dress our kids up in cute costumes, teach them songs they will sing incessantly at the dinner table, charge up our video camera, and pack the school cafeteria for a rousing performance of "Bear Went Over the Mountain" or whatever these shows are called (you know you only pay attention when your kid is singing). I did it, you did it, Warren Buffett did it (probably), and I'd bet the house that Joe Biden did it.

We sang songs about friendship or teamwork or sharing or something and became the best country in the world doing it.

As Bassok points out later in her article:

"...teaching academic content need not be at odds with "play" and other types of pedagogical approaches considered developmentally appropriate in early childhood."

That's the America I want to see when I look in the mirror of education. The America that learns and plays. Because that's what we do better than any other country in the world.