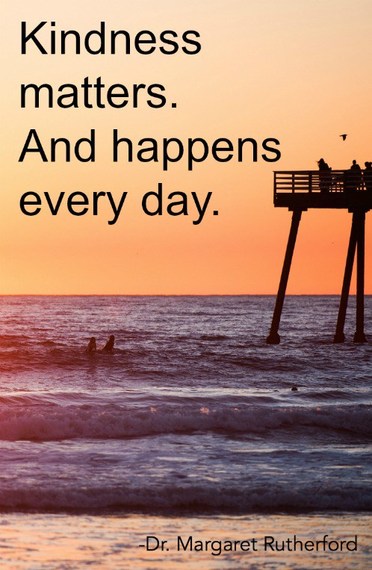 I sat down to write early this morning, and could only think of the many tragedies, some caused by humans and some by nature, that have been occurring for the last few weeks and months. I felt paralyzed.

Then I remembered a stranger's kindness, and I smiled.

It was the summer of 1988. I was getting my second divorce.

Tears were running down my face, as I doggedly trudged the path around White Rock Lake in Dallas.

The sky was beginning to light up, the muggy air warming as the rising sun glittered between the leaves of the trees surrounding the lake. I have always been an early riser. But that morning, I couldn't stand the anxious pressure I immediately felt when I opened my eyes. I had had to find my shoes, and head out to the lake for a walk, knowing that it wasn't the safest time to be alone on the trail.

My life was a mess, because I had made it that way. The shame I felt was immense. The failure, seemingly unbearable.

As I slowed up a bit, I saw an older man I'd never seen before, fishing off a pier that stuck out in the water. He saw me as well, and smiled. It was so quiet you could've heard a pin drop, the only sounds were chirping birds and the occasional plop of a fish. For some reason I still don't understand, I approached him.

He must've been able to see that I'd been crying, but he didn't say anything.

I don't remember the rest of our conversation. All I know is that I eventually spilled my guts. And he listened.

He was kind, and comforted me.

Our world is full of hate and fear. Perfect strangers harm one another. People hate us for the color of our skin, what gender we love, what or who we worship. Our own home can be a place filled with vicious anger and abuse.

It can feel as if there is no safety. Anywhere.

These past few months, I've been as despairing as any about the violence in our country, and in our world. I've kept the families and friends of those killed in my heart and mind.

Today, I remembered the fisherman. Years ago, I had searched for him on the trail, as my heart healed slowly. I wanted to thank him for what he had done for me that morning.

But I never saw him again.

Sometimes, some unexpected someone can save your life. Someone who doesn't look like you, or share a similar story. Someone who arrives without fanfare and disappears, never expecting gratitude.

Maybe he stopped for you in traffic, and if he hadn't, that truck would have rolled over you instead of the curb. Maybe she saw your child running off from you in the park, and led him back to you. You'd been busy watching your other kids, and didn't see. Maybe she heard the urgency in your voice, and found a way to get your mother in to see the doctor.

They didn't care or even think about your race, creed or religion.

They made a choice to be kind -- to be tuned in to the needs of others around them.

These small acts of kindness never make it onto the news. Sometimes, we're not even aware that they have happened.

They do. All the time. Every day.

It feels healing to remember.

Kindness matters ... and happens every day.

It's what I can do today about the hating. It's how I can fight against violence. It's what I have control over, right now ... in this moment.

Today, I can be kind.

If you are one of the many who have lost someone you love to violence, or have been affected by recent natural disasters, please know that you have many who are thinking of you, and keeping you in our hearts and prayers.

You can read more of Dr. Margaret on her website.