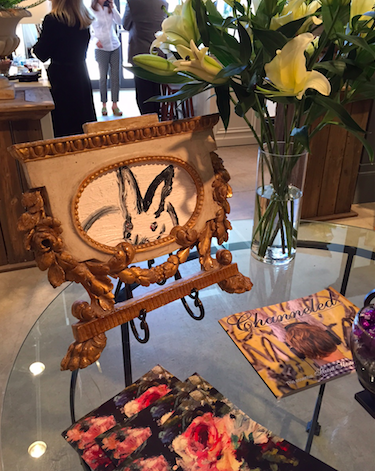 Jane Coats Eckert and Dianne Wright are two women who found in each other that kind of friendship one reads about in great novels; friendship that spans miles, years and sharp corners turned when life demands it. In tandem, Dianne and Jane formulated life mantras founded on happiness and beauty, and though they deal in exquisite tangibles, their mission as business partners goes far beyond what is placed on a table or hung on a wall.

Coats Wright Art and Design, located in Carmel, Indiana, is their collaboration, a gallery built upon joint dreams and career goals, a means by which the two women can provide for families and selves while clients/friends are likewise served, as the time-honored cycle of artistic production and art acquisition is brought full circle -- and then nudged forward.

Kindred Spirits, on exhibit at Coats Wright through mid-June 2015, features the works of Hunt Slonem and Carmelo Blandino. It opened with a reception, a lively evening of music, food and wine, and spirited conversation. Here to attend the Indy 500, Slonem and his good friend Blandino lent their respective presences. On the one hand, they were there to promote their wares as any resourceful artist would; on the other hand, they were there to support the Arts and promote Art, a critically important aspect of our humanity, a recorder and societal balancer of the most beautiful kind. 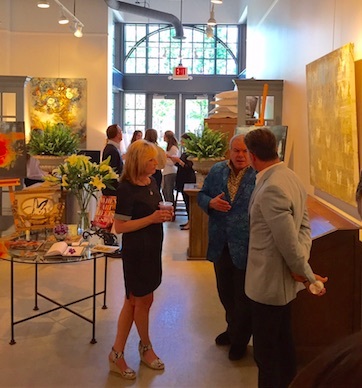 Let's dispense with the academic observations: Gazing at the paintings of Hunt Slonem, I see Durer's famous hare, but then I also see neon-hued, sugary Peeps. I see the illustrative playfulness of Bemelmans, but then I also see Warhol in the pop iconic and rhythmic treatment. I see Klimt in the purely decorative fields -- gold and textural whites upon which creatures reside in patterned repeats -- like music notes, as Dianne pointed out. Slonem's works evoke fabric and tapestries by gentle force of a hand that weaves slathery schmears of paint and bold imagery into irresistible, highly decorative wholes. Many of Hunt's larger panels evoke a finely woven tapestries -- I can just image a hundred Perky's, woven into a princely background of gold thread, giving any unicorn in any garden a real run for its money.... That Slonem has in recent past and currently collaborated with textiles/home furnishings manufacturers makes total sense; his work is addictive and should be made available to the many.

For Slonem, tangible praise exists in droves. High-octane output is matched with impressive prices, major media attention, rosters of celeb collectors and venerable museum inclusion. Slonem has indeed attained upper echelon artist status, living a creative dream realized in the best way: how many industries exist, I ask you, where a vastly successful product and production are realized this positively, on all sides, on all counts? So let me not simply join ranks with the chorus but rather point out his engaging wit and soothing voice, and a fashionable look that speaks loud n clear of eclectic loves and interests. Slonem, however large and "loud" he might present, spoke reverentially of silence, in which he often prefers to paint. Whether it's the collective squawk of his beloved birds or the incessant construction din that surrounds, it can distract. For Slonem, the painting/the living is also all about the listening. If one listens, as he does, to other dimensional voices from far off times and places, some silence is needed to help carry all that non-sound to one's mind. 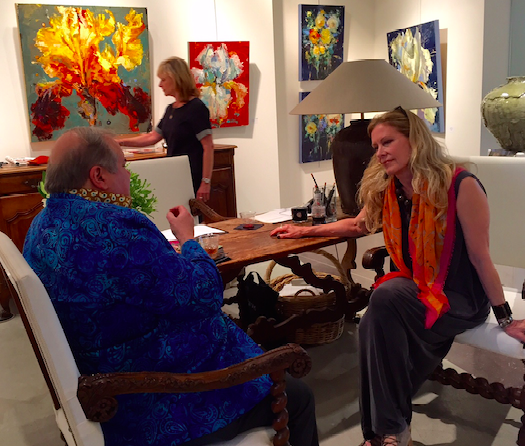 Turning to Blandino's works, I see O'Keefe and again, as with Slonem, I see a pop iconography via the graphic blasts of color and impactful images all lined up, doing aesthetic duty like beautiful soldiers. Of course I also see shades of Van Gogh in the intermingling of Carmelo's thickly rendered, decorative line work. It speaks as much of a strong and confident hand as it does complete, utter absorption in the moment - the focus is matched by the drive. Blandino's work is in short spectacularly photogenic, his fast-evolving left-handed (intentional handicap/brain switch) style physically deconstructing the picture and calling forth the spirit or essence of the flower, whose portraits he produces with the very palette knives his father once used. About a dozen years into his full-time artist's leap, Carmelo's earlier hyper-surrealism has given way to a style that digs aggressively into his own soul's depths -- the blooms appear that combustible, that provocative. This ultra painterly style will in the long run no doubt serve to make the building of his oeuvre a far more enjoyable and satisfying journey (something I well imagine Hunt figured out a long time ago) for somewhere between Olde Worlde Impressionist and master baker do his pieces reside -- they are that scrumptious while yet that ethereal. Blandino's newer floral works step even farther from naturalistic homage with plastic, electric background hues that barely stay put behind flowers that jump up and out of their four corners as if on fire, captured like gorgeous phoenixes.

And while the work of these artists could be intellectualized into the stratosphere, it is no coincidence that their success is due in large part to the very simple, very intuitive deliciousness of their works: Paint thick as frosting. Pictures of substance and harnessed energy. Works that suggest as having come from one who had fun with the process. This easy emotional connectivity is key in the wide-reaching appeal of Slonem's and Blandino's works -- palatable as a warm loaves of bread, they satisfy in their ability to provide sustenance to the soul.

Both men project an affability borne of a self-acceptance. Positive energy is the driving force, derived from their individual but evidently parallel missions in life, which is to say they consciously strive to create and share beauty and joy via their works. The subsequent mission of their works, once placed in collectors' homes and on their walls, is to live on as representative of both the artist and the gifts they with intention impart into their works -- joy quite literally paid forward. Slonem and Blandino also work on behalf of loved ones who came before them, in honor of ancestral work ethics and the toil that supported each generation, at times at direct cost of artistic dream pursuit and realization.

Slonem and Blandino also happen to be old and wise enough to possess appreciation founded on the understanding that they are on this earth (like those before them) for a very short time, and it is therefore an existence imperative to make the best of it, for themselves and all they encounter, whether in person or through their works. That "best" is clothed fully in the positive, which is why their works evoke smiles and warmth, not scorn or some challenge relying on obscenity or ugliness. That they leave to others, not out of fear of confrontation or prudishness, but based on choices logical and congruent with their personal goals as men and artists. It's a form of wisdom, I think, to know when one does not have to flex muscle to hit hard.

It is also no coincidence that Slonem's and Blandolino's works complement each other; together they dress the room beautifully. It appears almost intentional when conversing with the two friends, but it is not. The visual compatibility is thanks to disparate but parallel paths of kindred spirits who have found each other and become fast friends. The men talk for hours, they say, on things metaphysical and abstract; big things are nothing, little things are huge. While Carmelo actively maintains social media sites to promote his work and forward a skyrocketing career, Hunt has been at this so long that he has his foot stuck in many doors, both pre- and post-tech takeover. Slonem is, albeit reluctant at times, grand secondhand beneficiary of others' billboarding and the 24/7 broadcasting of self n stuff by virtue of both his artistic career and subsequent celebrity. Though Hunt laments aspects of this (together we bemoaned the ongoing Kardashianification of popular culture), he enjoys the entertainment it provides as conversational fodder. More importantly, Slonem relishes his resulting ability to create glorious residences and vast studios out of historic edifices as passionate curator of home n hearth.

Both Hunt Slonem and Carmelo Blandino possess an open-mindedness of a literal sort, which demands they strive to grow beyond the proverbial 10% brain activity with which we are supposedly blessed, as a means to nurture not only the artistic drive they require as professionals but also to grant each the ability as Mensch to link past with present, ordinary with the metaphysical, real-time/real-life with the universal. These men, having taken that final artist's leap each in their own way and time, live their art. They are both colorful, vibrant representatives who reflect the very work they produce -- or is it the other way around? Kindred Spirits serves to help build these two legacies in the making. Happily for us, their bounty is our banquet. 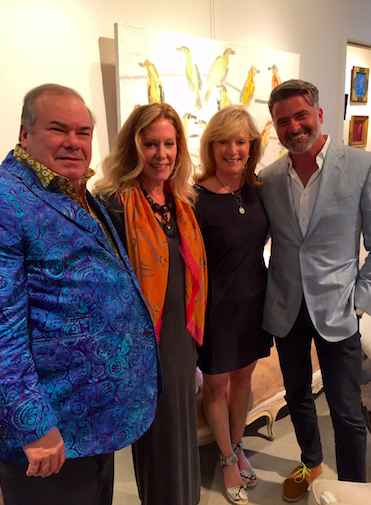 All photos by Kimann, used with permission.