The juxtaposition of events was at once startling and profoundly reassuring.

Last week in Vienna, only a few days after a cease-fire put an end to the recent exchange of missile fire between Israel and Gaza, I had the privilege of attending the opening of the King Abdullah Bin Abdulaziz International Centre for Interreligious and Intercultural Dialogue in Vienna. The often inspirational event held at the ornate Hofburg Palace was attended by U.N. Secretary General Ban Ki-moon, the foreign ministers of Saudi Arabia, Austria and Spain, a high-level representative of the Vatican and many eminent Muslim, Jewish, Christian and other religious leaders.

Among the prominent Jewish leaders who took part in the historic conclave in Vienna in addition to myself were Rabbi David Rosen, director of interreligious affairs at the American Jewish Committee; Chief Rabbi Pinchas Goldschmidt of Moscow, who serves as president of the Conference of European Rabbis; Lawrence Schiffman, chairman of the International Jewish Committee on Interreligious Consultations, and my father, Rabbi Arthur Schneier, president of the Appeal of Conscience Foundation.

The fact that the opening of the King Abdullah Centre went forward as planned despite the Gaza conflict, and with the involvement of world-renowned rabbis and imams, shows that Muslim-Jewish engagement, which barely existed a decade ago, is alive and well. This profoundly important process of reconciliation between the two faiths, strengthened by the involvement of King Abdullah, the Guardian of the Two Sacred Shrines of Islam, offers hope for a future in which Muslims and Jews around the world put aside mutual fear and loathing and build ties of friendship and trust.

Since 2007, when my partner Russell Simmons and I launched a then-seemingly utopian initiative at the Foundation for Ethnic Understanding to strengthen Muslim-Jewish relations, many thousands of Muslims and Jews in countries around the world have connected with each other on a human level, holding joint events every November during FFEU's annual International Weekend of Twinning, which has been held every year since 2008.

After convening the first-ever Summit of North American Imams and Rabbis in New York in 2007, FFEU sponsored a mission of 30 European imams and rabbis to New York and Washington in 2009, a highly successful trip that led to the convening of the 1st Gathering of European Muslim and Jewish Leaders in Brussels in 2010. In 2011, the three presidents of the European Union received Chief Rabbi Albert Guigui of Brussels and Grand Mufti Mustafa Ceric of Bosnia-Herzogovina, who presented them with a statement by participants in the Gathering calling on European leaders to strongly oppose Islamophobia, anti-Semitism and xenophobia and not to pander to far-right nationalistic parties that appeal to bigotry.

Given all of the above events and the steady building of grass roots Muslim-Jewish ties in cities around the world, it is not too much to say that we have helped to create a global movement of Muslims and Jews committed to communication, reconciliation and cooperation. We believe that the steady growth of this movement will in time contribute to the realization of peace in the Holy Land by showing our brothers and sisters there that Jewish/Muslim amity is eminently realizable, and therefore they are not fated to fight each other forever.

In this process, King Abdullah Bin Abdulaziz has played an indispensible role, one for which he will certainly be honored in the history books. In July 2008, the then-84-year-old monarch convened the World Conference on Dialogue in Madrid, to which he invited leaders of all of the world's major faiths, including Judaism. In November of the same year, the King travelled to New York to address the United Nations and to promote his interfaith initiative. Later that evening, I was given the honor of addressing King Abdullah on behalf of 100 Jewish, Muslim and Christian luminaries at a reception held by the King.

During the following year, I participated in steering committee conferences in Vienna and Geneva to plan the King Abdullah Bin Abdulaziz International Centre for Interreligious and Intercultural Dialogue, which finally opened last week. While the King was unable to travel to the long awaited event in Vienna, he was ably represented at the Opening by his Foreign Minister Prince Saud al Feisal.

Ever since King Abdullah launched his initiative in Madrid in 2008, he has been met by deep skepticism from sometimes well-meaning people, who question whether an absolute monarch in a theocratic state where public worship by non-Muslims is banned, could be genuine in his efforts to strengthen ties with other faiths on the basis of mutual respect and equality. For my part, I came to believe the King was acting in good faith when I heard the words he uttered in Madrid. "My brothers, we must tell the world differences do not lead to conflict and confrontation" King Abdullah said. "Tragedies that have occurred in history were not caused by religion but by extremism adopted by some of the followers of each one of the religions, and political systems."

In other words, here was the most powerful representative of Islam stepping forward to claim the portfolio of moderation and to affirm his commitment to dialogue with other faiths, including my own. Subsequent events within the Kingdom, such as allowing women to vote and run in municipal elections and the implementation of educational curriculum reform have made clear that Abdullah's outreach to other faiths is indeed going hand in hand with consistent efforts to counter religious and social extremism within Saudi Arabia.

For those of us in the Jewish community who understand that if we are to ensure a decent future for world Jewry and for Israel we must find a way to mitigate conflict between 14 million Jews and 1.4 billion Muslims, it would be akin to criminal malpractice to spurn the outstretched hand of the most powerful leader in the Muslim world. We should not forget also that Saudi Arabia remains the main bulwark within the Muslim world against the ascendancy of Iran and the spread of Islamic extremism, which imperils both Israel and the West. I also believe it would be wise for Israel to give a second look to the Saudi Peace Plan of 2002, which, while problematical in some respects, clearly recognizes Israel's right to exist and which retains the support of the entire Arab League.

I left Vienna more optimistic than ever before that with the support of King Abdullah, Jews and Muslims around the world will accelerate the process of extending hands to each other across the barricades and replacing fear with hope. I firmly believe this global process will ultimately finally bring peace to Gaza -- and to Jerusalem -- as our two peoples finally embrace the injunction of the Prophet Isaiah to beat swords into plowshares and to study war no more. 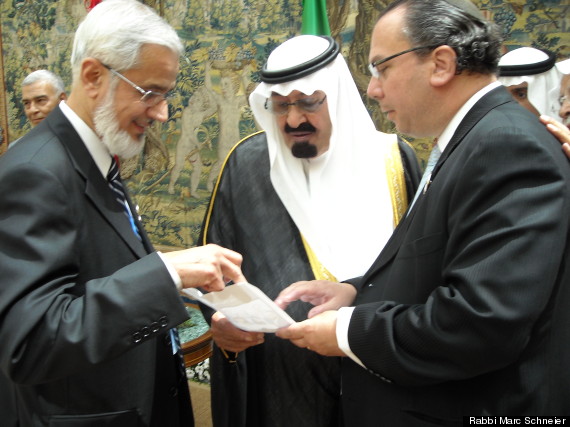 Rabbi Marc Schneier is President of the Foundation for Ethnic Understanding and Senior Rabbi of the Hampton Synagogue in Westhampton Beach, NY. Schneier is co-authoring a book on Muslim-Jewish relations entitled Sons of Abraham, with Imam Shamsi Ali of the Jamaica Muslim Center, New York City's largest mosque, to be published by Beacon Press in the Fall of 2013.