The law -- Saudi Arabian style -- has finally caught up with an anonymous man who became an Internet sensation for his daredevil driving stunts.

Nicknamed "King al-Nazeem" by his online fans, a 23-year-old Saudi man was sentenced to 10 years in jail and 1,000 lashes for a series of driving offenses on Monday, the Saudi Gazette reported. The prosecutor asked judges to reconsider and apply the death penalty, saying the young driver had caused a passenger's death during one of his car drifting escapades.

Terrifying footage of King al-Nazeem's gravity-defying stunts on busy roads in Saudi Arabia made him a YouTube sensation in recent years.

According to an Emirati news site, Saudi police finally caught up with al-Nazeem in November 2013 when he was hiding out in a house near Riyadh. Authorities also seized a stolen car, firearms and fake license plates designed to throw authorities off the drifter's trail.

In one YouTube video purporting to show King al-Nazeem at work, several young men hang out of car windows, firing weapons into the air.

Another alleged to have been filmed from inside his car includes nausea-inducing spins.

Some shots appear to show one of his fake license plates -- "King al-Nazeem" written in Arabic. 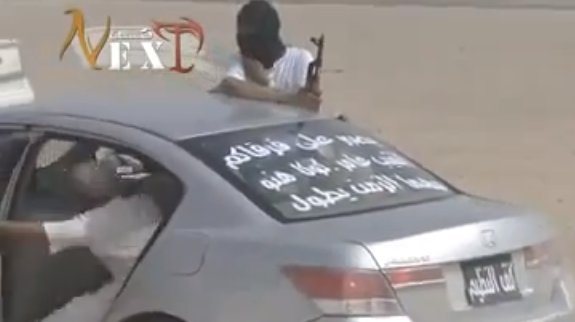 The BBC reports growing numbers of motorists in Saudi Arabia are pulling hair-raising automotive stunts, in part because of open roads and the adrenaline that comes with "sidewalk skiing."

Al-Nazeem's case is not the first high-profile prosecution of a Saudi drifter. In 2012, one joyrider was sentenced to death after being convicted of killing two people during a stunt show.

But in a country that enforces a religious ban on women driving, and beheads criminals publicly, it might be time to revisit driving rules altogether.