King Avriel began performing at the age of 2, and playing the piano & violin by age 9. She soon began to write songs and went on to become a published poet. At 5 years old, King Avriel landed her first feature role as the voice of Timberly on Nickelodeon's Hey Arnold. After releasing several small projects, being featured on mixtapes with artists like Miguel and captivating thousands of online fans, King Avriel became disillusioned with industry politics & decided to return to school. She accepted a full academic scholarship at UCLA, but it was not long before she realized music was still her true passion and returned to it. Her debut Thesis serves as more than an album to King Avriel -- it's an intensely personal journey that she guides listeners through. Thesis is a collection of King Avriel's thoughts and experiences woven together to create an evocative and authentic project combining stunning vocals and stripped bare songwriting, Thesis serves as a peek under the covers at this prodigiously talented singer, songwriter and composer. I spoke with Avriel and checked out her new video Caricatures. 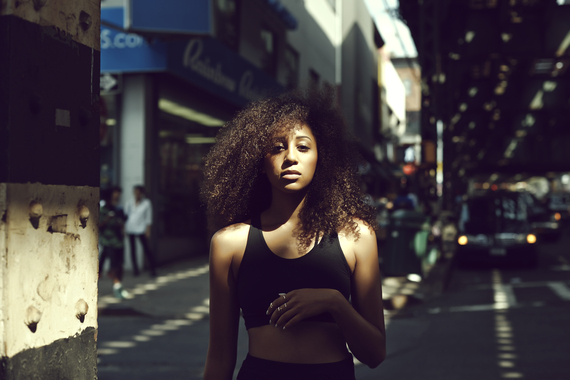 I love your songs especially "Freedom," the one we used in the Sochi PSA (Russia Declares Discrimination Newest Olympic Sport). I thought it was really powerful. So let me just start there I guess, what are your views on the current state of lyrics in especially in urban music or just pop music in general and how do you think like you fit in there and how do you think that you could help the evolve to something that you aspire to?

And so we are starting to see this injection of different perspectives in media. I think that is really where that shift comes from. Never before have we had hip hop artist like black men who completely dominate the industry and feel empowered to challenge the way masculinity or race is portrayed in pop culture. Artists aren't controlled by the status quo as much as they used to be, and you can see that in the topics that are being explored in songs. There is a boldness and fearlessness in music right now.

Who in particular are you thinking of when you say that?


Well, like Jay-Z does it a lot, and Drake and his emotional vulnerability, although I feel like Tupac was doing that a long time ago when he was challenging the status quo on a mainstream platform. But now we've got people like....

I think that my generation is really interested in causes and we are driven by our passion for wanting to change things whether it is like social justice issues or environmental issues or whatever, and I think that the music and the culture is finally starting to reflect that a little bit more. Artists want to use their platforms for good -- to see affect change.

That inspired me to start making music seriously when I saw that this lane was starting to open up and there would be a place for me to talk about things that were important to me and not have to dumb myself down or be vapid and just make things that are catchy or sound cool. There is a way to make music that is accessible but also thought provoking at the same time and that is kind of the mission that I am on.

Was that the impetus for Thesis? If so, the title is a perfect fit then, too.

It was, it definitely was.

I would argue, that as much as you say your generation is the most informed, they are are also the least informed. They have access to all this information, but information is not knowledge. So, I think that it is a lot of responsibility on artists like for yourself or someone like Frank Ocean, to be responsible and carry a bigger burden of representation. This is why I think like when someone like Kanye says something stupid , why it deserves a lot of criticism because part of the problem is that, in journalism they used to call like the ombudsman, the gate keeper.

That's something I struggle with everyday. It is definitely really important. I think that the key for me at this point is like you are touching on the fact that people are lacking these critical thinking skills that are just as important as getting the information.

Right and that is something you learn through formal education too. It is like truth is really relative -- elusive almost -- even stuff that we think is like scientifically proven as being true or like has data to back it up or whatever... science can be manipulated. It all depends on the biases that the researcher is going into the study with. What you are looking for is what you are going to find. There are inherent flaws in like trying to find things that are true and fact, and as receivers of that information, we have to be able to think for ourselves and be critical of our sources of information -- never take anything at face value.

I feel like there was a moment, I was feeling at least back in the late 90s, where we just proved certain things, like whether it was stupid old ideologies, one of the things that really strikes me is the resurgence of hate groups, and it is not even like they are coming up with new shit, they are using really old stuff, like shit from like the 19th century and I am like Jesus Christ, they are reaching back that far for this nonsense. At the end of the day how do you feel as an artist, what would you employ to combat these things?


That's why the story is so important to me because you are right, one thing that cannot be argued is a personal experience, a personal story, and that is why I focus on that. I think that is one of the issues with big data and trying to solve problems or look at social issues through statistics. That has it's place, but at the end of the day, you have to go down and look at people's actual lived experiences and allow marginalized people to tell their stories.

And that is specifically the reason why I write my music in the way that I do. I am not good at telling people like "oh the system's doing this," or "like you've got to think about it this way and like be careful because you don't want to be taken advantage of and exploited and blah, blah." I hate preaching to people and I hate being preached at. I am just going to tell you my story and give you this perspective that you haven't been exposed to before because I feel like my experience is not represented in pop culture.

And maybe you can resonate with it on some level or empathize with it, think about how it relates to you in your experience or the way that you treat people who might have a similar experience as me. At the end of the day, for me, it is really just important to tell stories in the hopes of humanizing each other and understanding each other better.

Bearing witness, as the previous generation used to call it.