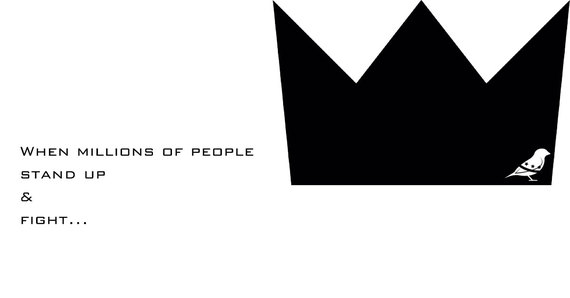 This is politics. I don't agree with Bernie endorsing the oligarchical robot machine candidate that many of us are fighting against, but this is politics. He's playing the game and I think he's positioning himself. If Bernie does have good judgment, as we've seen in videos from the past, he's making what he feels the next move is. We don't have to follow his endorsement, but we should give him the benefit of the doubt.

Some people have a theory that he endorsed because he wants to be cool with Hillary (super)delegates and supporters. In case she gets indicted or faces another scandal or is getting rocked in the polls. He technically hasn't conceded and it'll still be a contested convention. I don't think Bernie wanted this. Watching Bernie and Jeff Weaver's faces while they talked about the endorsement was like watching a contestant on Fear Factor eating spiders, an elk penis, and llama manure. I felt sick to my stomach, and I bet they did too. Maybe according to their strategy this is what it takes to "win" the long game.

The fearmongers are already pushing me to follow Bernie's lead by voting for Hillary to prevent Trump. I ask them if Hillary has stopped taking money from millionaires and billionaires? Has Hillary released her Wall Street speeches? Is Hillary going to admit that either she lied or was completely incompetent as Secretary of State? No?

Then, sorry boo, but I'm in the camp that wants a full scale "political revolution." Minus the bloodshed, cause I'm a pussy. I want people to participate, protest, and vote in the sham elections. I believe it takes action through multiple means to change the system. Starting with your neighborhood all the way up through the entire union. I also don't believe in the system. Not the presidency, not the congress, not the judges, the FBI, CIA, NSA, or PDs in most places. I don't trust them nor believe anything they say. Hence why I plan on playing in and out of the system. I'll vote (not for HER, but maybe for her, myself, or satan), and I'll focus on local/state candidates that don't take bribes from oligarchs. I'm going to protest/volunteer at the DNC convention in Philadelphia from July 24-28 (you coming or whet?). I'll find other ways to be involved. Like the subsequent organizations Bernie is creating to help elect like-minded individuals (sign up bitches).

Maybe if we're lucky the Clinton (super)delegates will change their votes and make Bernie the nominee. Maybe if we're lucky the people will revolt, dump the two shitty presumptive nominees, and king Bernie. He is the ONLY candidate from both horseshit races who has a net positive favorability (more people like him than not). I can dream can't I?

You don't have to vote for Hillary (I'm not), and you don't have to agree with Bernie's positioning. But shit, this campaign brought millions of us together. The DNC convention and protests will bring us together face to face. For over 16 years I've been talking about many of these issues to an empty room. I don't feel alone anymore. The country is finally changing and it's a fun time for US politics. I feel there's something big coming. The public is angry. People are revolting more and more all across the US against systematic repression. It feels like a tsunami. I can feel that unfamiliar gust of wind, with sounds of the waves getting louder. It's an abnormal occurrence departing from the routine of our geopolitical reality. Let's keep going. We are only going to defeat the oligarchy by talking about the issues and engaging every day, every week, every year, wave after wave after wave. We don't have to be involved 24/7, but we must make these issues a part of our social consciousness. We have to peel off decades, if not centuries, of corruption. Understand that WE have to do the work to change our country.

I'll leave you with what Bernie said about Bill Clinton running for President in 1996:

In terms of who to support for president, the choice is really not difficult. I am certainly not a big fan of Bill Clinton's politics. As a strong advocate of a single-payer health care system, I opposed his convoluted health care reform package. I have helped lead the opposition to his trade policies, which represent the interests of corporate America and which are virtually indistinguishable from the views of George Bush and Newt Gingrich. I opposed his bloated military budget, the welfare reform bill that he signed, and the so-called Defense of Marriage Act, which he supported. He has been weak on campaign finance reform and has caved in far too often on the environment. Bill Clinton is a moderate Democrat. I'm a democratic socialist.

Yet, without enthusiasm, I've decided to support Bill Clinton for president. Perhaps "support" is too strong a word. I'm planning no press conferences to push his candidacy, and will do no campaigning for him. I will vote for him, and make that public. Why? I think that many people do not perceive how truly dangerous the political situation in this country is today. If Bob Dole were to be elected president and Gingrich and the Republicans were to maintain control of Congress, we would see a legislative agenda unlike any in the modern history of this country. There would be an unparalleled war against working people and the poor, and political decisions would be made that could very well be irreversible.

Medicare and Medicaid would certainly be destroyed, and tens of millions more Americans would lose their health insurance. Steps would be taken to privatize Social Security, and the very existence of public education in America would be threatened. Serious efforts would be made to pass a constitutional amendment to ban abortion, affirmative action would be wiped out, and gay bashing would intensify. A flat tax would be passed, resulting in a massive shift in income from the working class to the rich, and all of our major environmental legislation would be eviscerated.

The Motor Voter bill would be repealed, and legislation making it harder for people to vote would be passed. Union-busting legislation would become law, the minimum wage would be abolished, and child labor would increase. Adults and kids in America would be competing for $3.00-an-hour jobs.

You think I'm kidding. You think I'm exaggerating. Well, I'm not. I work in Congress. I listen to these guys every day. They are very serious people. And the folks behind them, the Christian Coalition, the NRA, the Heritage Foundation, and others, are even crazier than they are. My old friend Dick Armey is not some wacko member of Congress laughed at by his colleagues. He is the Majority Leader of the U.S. House of Representatives. Check out his views. No. I do not want Bob Dole to be president. I'm voting for Bill Clinton.

Do I have confidence that Clinton will stand up for the working people of this country--for children, for the elderly, for the folks who are hurting? No, I do not. But a Clinton victory could give us some time to build a movement, to develop a political infrastructure to protect what needs protecting, and to change the direction of the country.

Are you voting in the general election? Are you #BernieOrBust and how will you end up voting? What do you think about Bernie's endorsement?

For more articles, videos, and show information, check out my website at SadiqSamani.com