More than 200 years ago, France's King Louis XVI was killed (along with his wife, Marie Antoinette) via guillotine, and legend has it someone used a handkerchief to soak up the king's blood, then stored the handkerchief in a gourd.

Now scientists have confirmed that a squash emblazoned with figures from the French Revolution indeed contains the dried blood of the executed king.

Scientists matched DNA from the blood with DNA from a detached and mummified head believed to be from a direct ancestor of King Louis XVI, the 16th-century French king Henry IV. The new analysis, which was published Dec. 30 in the journal Forensic Science International, confirmed the identity of both French royals.

"We have these two kings scattered in pieces in different places in Europe," said study co-author Carles Lalueza-Fox, a paleogenomics researcher at Pompeu Fabra University in Spain. The new analysis confirms that the two men "are separated by seven generations and they are paternally related." [See Photos of the Embalmed Head & Gourd] 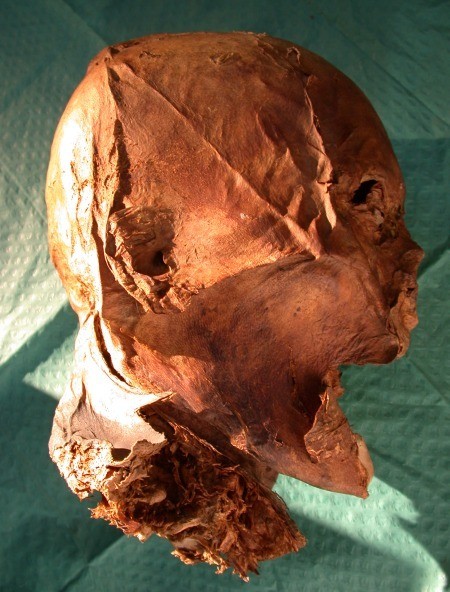 King Henry IV was born in 1553 and became king in 1589 after a crazed monk killed his predecessor, Henry III. To ascend to the throne, Henry, a Protestant, converted to Catholicism and laid siege to Paris. Through his fair and peaceful reign, he earned a reputation as "Good King Henry."

But in 1610, a fanatical Catholic assassinated him, and his body was embalmed and laid to rest in northern Paris. There it stayed until the French Revolution, when looters desecrated the graves of bygone monarchs. At this point, someone must have cut off King Henry's head.

The head was held privately until 2010, when researchers used a facial reconstruction to argue that it once belonged to Good King Henry. But DNA taken from tissues in the head was too contaminated to analyze for any definitive conclusion.

Meanwhile, a wealthy Italian family possessed the gourd that allegedly contained the blood of the unpopular King Louis XVI. (The handkerchief presumably had disintegrated.)

Louis XVI was born in 1754 and died in 1793, when the rising tide of revolution swept him and Marie Antoinette from power and eventually to the guillotine. At his execution, legend had it that witnesses dipped their handkerchiefs in the monarch's blood, Lalueza-Fox told LiveScience. Text on the gourd recounts the gruesome story: "On January 21, Maximilien Bourdaloue dipped his handkerchief in the blood of Louis XVI after his decapitation." [10 Historically Significant Political Protests]

Last year Lalueza-Fox analyzed the genetic material in the blood and found it came from a blue-eyed European male. But without any comparison DNA, he couldn't definitively say it was the blood of the last French king.

This year, however, the forensic scientist who originally studied the embalmed head sent DNA from inside it to the research team. The new DNA was not as badly damaged, and Lalueza-Fox and his colleagues were able to get parts of the Y, or male sex, chromosome, which is often used to identify male lineages.

By comparing the Y chromosome in both samples, the team concluded that the two men were 250 times more likely to be genetically related than unrelated. Both samples had genetic variants characteristic of the Bourbon region of France, and those variants are very rare in Europe today.

Given the history behind the samples, the new findings confirm that both the dried blood belongs to King Louis XVI. It also verifies that the embalmed head once belonged to King Henry IV.

Now that it has confirmed the blood came from Louis XVI, the team is planning to reconstruct the entire genome of the deposed French monarch.

"This could be the first historical genome ever to be retrieved," Lalueza-Fox said.