The genetic code of King Richard III, the medieval monarch whose body was found buried under a parking lot in Leicester, England, is set to be sequenced.

Researchers at the University of Leicester announced the project today (Feb. 11). The goal, they said, is to catalog as complete a genome as possible from the king to learn more about his ancestry and health.

"It is an extremely rare occurrence that archaeologists are involved in the excavation of a known individual, let alone a king of England," Turi King, a geneticist at the University of Leicester who will lead the project, said in a statement. "At the same time, we are in the midst of a new age of genetic research, with the ability to sequence entire genomes from ancient individuals and with them, those of pathogens that may have caused infectious disease. Sequencing the genome of Richard III is a hugely important project that will help to teach us not only about him, but ferment discussion about how our DNA informs our sense of identity, our past and our future." [Photos: In Search of the Grave of Richard III]

Richard III in life and death

Richard III was the last English king to die in battle. He perished in the Battle of Bosworth during the War of the Roses, a long-lasting civil war between noble families of England.

After his death in August 1485, Richard's body was taken to Leicester and buried in a hasty grave; the location of the grave was then lost. In 2012, archaeologists embarked on a mission to find the king's skeleton, digging in a city council parking lot based on clues in historical documents.

In February 2013, the researchers announced that they'd hit the jackpot: A skeleton with a curved spine, found stuffed in a sloppy grave, did indeed belong to Richard III.

Richard III's bones revealed that he had scoliosis, an abnormal curvature of the spine. His bones showed battle wounds, including a devastating blow to the skull and scars likely caused by his enemies mutilating his corpse after death. The soil around the king's pelvis tested high for ancient roundworm eggs, revealing that the king suffered from the intestinal parasites.

Now, researchers hope to delve further into Richard III's history. The sequencing would make the king the first individual of known, historical identity to have a full genome sequence. Other archaeological individuals who have had their genomes sequenced have identities that will never be fully known, such as "Otzi" the Iceman.

Sequencing ancient DNA can be challenging, as the nucleic acids that make up the genetic code degrade with time. New techniques are making ancient DNA analysis easier, but separating original DNA from modern contamination remains a challenge. 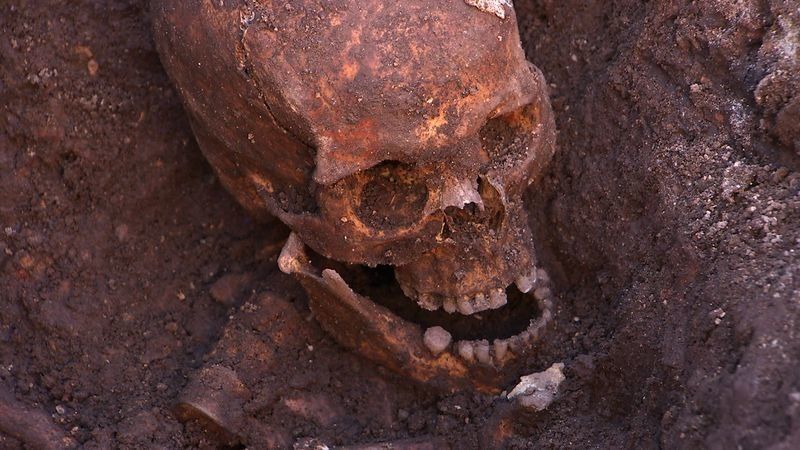 1 / 25
Skull
Human remains found in an excavation of the ruins of the Medieval Grey Friars church were later confirmed to belong to King Richard III, the 15th-century English monarch.
University of Leicester