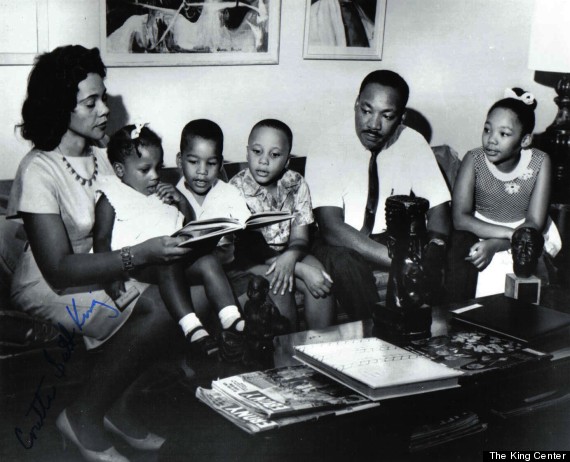 As I reflect on the legacy of my father, the greatest aspect is his legacy of peace. He reminded us that "the choice today is no longer between violence and nonviolence; it is between nonviolence or nonexistence."

Therefore, we are celebrating the 2014 King Holiday Observance with the theme, Remember! Celebrate! Act! King's Legacy of Peace for Our World. This theme also pays homage to the fact that, this year, we will commemorate the 50th anniversary of both my father receiving the Nobel Peace Prize, as well as the enactment of the 1964 Civil Rights Act.

With the theme of peace in mind, we launched our five-year "Choose Nonviolence" campaign. As part of the campaign, our goal is to expose, encourage, educate, engage and empower one million current, emerging and next-generation leaders to embrace Dr. King's leadership philosophy. This will be done through social media, dialogues, summits, marketing campaigns and a global leadership initiative.

On the national holiday today, The King Center is calling for a moratorium on violence. Specifically, we are asking that there be no shots fired -- no shooting off at the mouth with our tongue, no shooting off physically with our fists and no shooting off of any type of gun! Just for one day -- on the King Holiday -- in recognition of my father, and as TIME magazine has said, one of our nation's Founding Fathers, let us honor the memory of one of the world's most highly regarded nonviolent proponents of peace on his holiday, with no shots fired. Instead, we ask that people engage in something positive and uplifting in service to humanity.

Also, as a part of the commemoration of my father's birthday, we are asking everyone who is convening or hosting a commemorative event or program, or an individual who wants to show allegiance, to ring a bell or bells as a symbolic gesture of your commitment to choosing nonviolence as a lifestyle. So, take a moment at some point today, Monday Jan. 20, to ring a bell -- and please share it with us through one of our social media channels (Facebook, Twitter or Instagram). To learn more about The King Center's "Choose Nonviolence" campaign, visit www.choosenonviolence.org.

Often, I am asked, "What was your father like?" or, "What would he think?" These are very difficult questions to answer, as I was so very young when I lost my father. However, one of the most powerful examples of his firm commitment to the principles of nonviolence is his response to being incarcerated in Reidsville Prison in South Georgia in October 1960. After being arrested for violating his probation for a minor traffic infraction, my father was shackled both at his wrists and around the ankles, and he was placed in solitary confinement where he was fed through a hole in the floor and provided no contact with other prisoners. My mother was fearful for his life, as she did not know where he was. After my father was released, he could have been filled with hate, but he remained steadfast in his commitment to the principles of nonviolence and continued to work towards equality and justice for every human being, for my father's dream extended far beyond racial equality.

Choosing nonviolence does not mean that one will never get angry or become upset with others, including the ones we love. One day my dad and brothers were riding their bicycles, and I decided to follow them into the street on my tricycle. My father was very upset, but he remained disciplined and didn't let his emotions take him too far, which is an important part of embracing nonviolence.

I shared this story about my father to remind us that as human beings we will fall short from time to time. We will get angry, feel hurt, or say something we wish we hadn't. It's okay. The important thing to remember is that we must remain disciplined in how far we take that anger or hurt, and that it is presented in an appropriate and nonviolent manner.

If each of us works toward making a sincere effort when we wake up each morning with a renewed commitment and dedication to embracing nonviolence as a lifestyle, this world will become a better place bringing us ever closer to the Beloved Community of which my father so often spoke.