The M.O.F., Meilleur Ouvrier de France (Best Craftsman of France), is a title that was created in France at the turn of the century when the country realized that their artisans
and the work that they were producing was lagging behind that of other countries. Some
reaction was needed, an impetus for progress, so that craftsmanship in France would
excel and prevail in the future for all trades. Since that time, a competition takes place
every three or four years for more than 250 professions in France including florists,
carpenters, butchers, jewelry makers, and of course pastry chefs, to name just a few.
The elected M.O.F.s become ambassadors for their trade and take on the duty to share
their knowledge and train new craftsmen to become the M.O.F.s of the future. The
documentary film, Kings of Pastry, shows the finals of the M.O.F. pâtissier competition in 2008. This was a historical occasion as it was the first time that cameras were allowed to witness this event.

Prior to reaching the final, the competitors in the M.O.F. pâtissier enter a semifinal
round which takes place about six months to a year before the final. Seventy to eighty
candidates compete in a grueling two-day try-out in different culinary schools throughout
France. This battle before the war concludes with the selection of about 16 candidates
who will be allowed to compete in the finals.

The topics of the semifinals are known by the candidates six months to a year
beforehand, which means that the M.O.F. process from beginning to end is a two-year
venture, but the preparation for this competition involves a lifetime of development.
Before I decided to begin this journey, I knew that my family and I needed to be on the
same page, and the sacrifices on everyone's part would be huge. The time needed to
prepare was tremendous: I practiced in every spare second I could find and was often
not home. It was also a great financial commitment as there are no cash prizes for the
candidates, making it a very expensive sport. I could not have done it without my wife
and children who were such a huge help by being so supportive, loving and tolerant.

So why do it? For the quest of excellence in your profession, of course. What could
be nobler? No matter what the outcome of this intense competition, you are never the
same. You can't possibly remain unchanged. You have to push yourself, more than you
thought possible, and whatever the outcome, you will come back a better professional.

The M.O.F. is a French competition for French citizens; most candidates reside in
France and for me, competing from abroad was a very challenging task, a colossal feat
of organization where everything had to be planned and foreseen. Before anything
else, I had to select a coach, and who else would be better than Sébastien Canonne,
co-founder of The French Pastry School (and my business partner for many years)
and Stéphane Glacier, a longtime colleague and friend. Both are M.O.F.s in pastry.

Next, you need to find an assistant who wants to sacrifice two years of his or her life
for such a challenge. I was lucky enough to have Kurt Fogle as my right hand; he had
just graduated from L'Art de la Pâtisserie, The French Pastry School's 24-week pastry
program. He was unconditionally dedicated to my crazy quest. Throughout this ordeal,
he did a tremendous job at keeping me sane and had the organizational qualities needed
for such an enterprise. He worked so hard and was there for me during the very difficult
moments.

Once you have an assistant, you need to find your support system in the country where
you are competing. In 1980, I was lucky enough to work in a pastry shop in Strasbourg,
France where I met an apprentice named Pierre Zimmermann. We became friends but
lost contact until 1995 when I competed in the Finals of the World Chocolate Masters.
At the same time, Pierre was representing France in the finals of the Coupe du Monde
de la Boulangerie (World Cup of Baking), where he became a World Champion, and we
had a chance to reconnect. Later on, he came to Chicago to teach continuing education
classes at my school. He has been coming to The French Pastry School for the last 12
years. When I mentioned my M.O.F. plans to Pierre, he and his family welcomed me
to their home and pastry shop in a small village called Schnersheim near Strasbourg just
like I was part of their family. They allowed me to set up my "headquarters" above their
family business for six weeks before the competition. Their support was beyond the call
of duty, from feeding Kurt and me, washing, drying and ironing our clothes to helping us
in the multiple logistical details that such an undertaking requires. The contribution they
provided was invaluable, and I will be forever grateful for their friendship and for what
they have done for me. 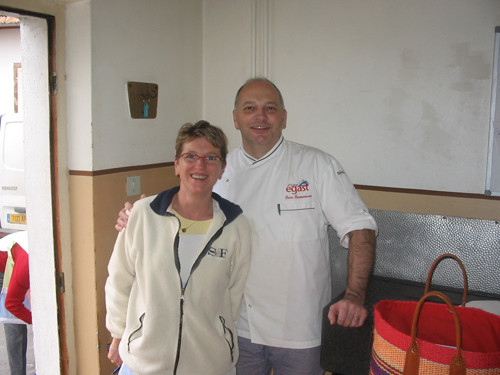 Pierre and his wife Michelle

Six weeks before the competition, it was time for us to leave work and our families. After
our arrival in France, the countdown started, and it was time to unpack, get situated and
readjust each of the recipes with the French ingredients that would react differently.

Once you receive the topics of the final competition, you have to carefully study the
required items. The theme was "Marriage," and the candidates needed to create a
wedding buffet from the wedding cake to the sweet table to the breakfast tray for the
couple's "day after." For the taste component, the items required were five types of
miniature pâte à choux items (pastry puffs, 12 pieces of each); one three-tiered wedding
cake to serve 30 people; three types of chocolate candies (20 each); one type of a plated
dessert (four of each); one brioche for two to be served on a tray for the bride's and
groom's breakfast together with 1500 grams of jam made with a summer fruit and
associated with a flower; three types of mini afternoon tea creations (12 each); and
one surprise item that would be unveiled to the candidates only on the first day of the
competition. For the artistic part: one chocolate sculpture that would be used to display
the chocolate candies; one sugar showpiece that would become the centerpiece of the
buffet; and one small masterpiece called a bijou that would be presented in a small
display case. Except for the bijou, all items had to be produced from scratch in front of
the judges in 24 hours, spread out over three days.

When all of the artistic items were decided; it was time to make all of the elements for the
bijou as well as putting in as many dry runs of the practice competition as possible. Then
it was time to pack. Everything ended up in a large crate that was shipped to France with
the hope that nothing gets broken, lost or just stuck at customs. The goal was to leave the
US with every single piece of equipment so that all we had to purchase in France were
the ingredients and the small electric equipment (since the voltage is different in Europe).

I had to first work on the taste part of it. Each required taste item could have many
components which would become the secondary recipes. Each recipe had to be dissected
to make it at the same time delicious yet also foolproof in its preparation. The making of
each recipe had to be fast and easy to execute; one failed recipe during the competition
can make you fall far behind, and elevate your stress level to the degree that you might
not recover. This is when the question is asked about each recipe: is it good? Better
question: is it good enough? Even better question: are the judges going to like it?

No matter what the outcome, all of the 16 candidates came out bigger and better after
such an amazing adventure. The effort put in was colossal and the human experience
unforgettable.

For Chris Hegedus and D.A. Pennebaker, this was their M.O.F.; they believed in
following me throughout this adventure not knowing exactly what was in store. The
more time we spent together, the more we understood each other's ideas, and we became
excellent friends. I am proud to know them. All pastry chefs and I thank them for
documenting this quest of excellence.

I hope that after seeing the film, Kings of Pastry, all will have a newfound appreciation of
the hard work of all artisans and their continual pursuit of excellence.

1 / 24
In the photograph above, Sébastien Canonne, co-founder of The French Pastry School and my business coach and I ask ourselves those very questions about the wedding cake.