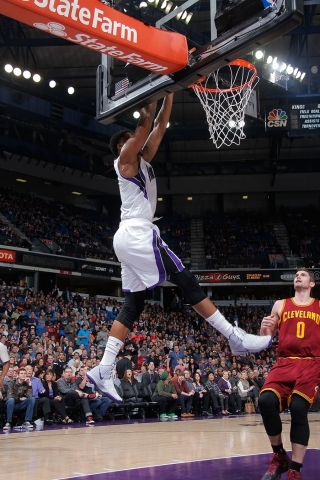 It feels good to not be that team trying to put the pieces together and for the Kings that's behind them now. Sacramento -- who struggled to figure out the momentum they once had in the beginning of the season that led to the firing of their head coach, Michael Malone -- all but understand what the Cleveland Cavaliers are going through without two of their main starters.

But last night, the Kings took advantage of the LeBron-less Cavaliers to rout them 103-84. Sacramento was at their best, getting off to an explosive start and never looked back. Their last two wins have been decided by 19 or more points. They had good ball control, and did not turn the ball over but one time in the first half.

"They came out and punched us in the mouth," said Kevin Love. "The first time we got into a double-digit deficit we just hung our heads."

"We're going through a lot of trials and tribulations, a lot of changes," Cleveland coach David Blatt said. "We're making adjustments on the fly. Tonight was definitely not a step forward. It wasn't a good performance, you can't sugarcoat it."

The Kings handed the Cavaliers their fifth straight loss. DeMarcus Cousins recorded his 21st double-double with game highs of 26 points and 13 rebounds. He also had a season-high five assists, a season-high-tying four steals and three blocks. Rudy Gay who exploded in the second half finished with 23 points and Jason Thompson grabbed 10 rebounds.

"When we defend the way we can, it's going to lead to easy offense," said Cousins. "We've just got to come out and be consistent every night if we want to be a defensive team."

"Only five turnovers for the game was a huge key for us," Sacramento coach Tyrone Corbin said. "We had 20 assists and only five turnovers in the game, only gave up five points on the turnovers, I thought we did a great job of valuing and sharing the ball."

Love had 20 points and 15 rebounds, Kyrie Irving added 21 points but that wasn't enough to tame the Kings. Timofey Mozgov who was acquired last week from Denver didn't add the spark the team needed but did have 14 points and 12 rebounds. LeBron James did join his teammates on the floor pre-game shooting jump shots, sparking a possible return later on their road trip.

"With LeBron out that's 27 points we have to make up every night," said Irving. "It hasn't been perfect the last eight games he's been out. It just boils down to our effort on both ends of the floor. Execution-wise we just need to get better."