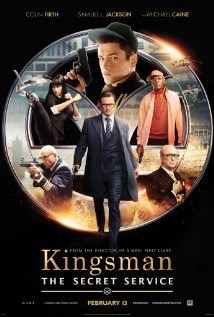 Michael Vaughn's Kingsman:The Secret Service is like The Shining meets Pygmalion. The movie which lies firmly in the tradition of Tarantino's meta cinema features a millenarian mogul, Richmond Valentine (Samuel L. Jackson), who frequently threatens that the outcome of what we're watching is "not going to be that kind of movie."

Jackson's persona references Pulp Fiction in that the character he played in both films has an inclination for Big Macs. Eggsy (Taron Egerton) is the movie's Galethea who will be transformed from a tough growing up in council housing into a slick and impregnable secret agent by a Bond rip off (Colin Firth). In terms of the theme of transformation, La Femme Nikita, Pretty Woman and Trading Places are all referenced in the movie, which could also be subtitled Film History 101.

The crazed Jack Nicholson character of The Shining hatcheting through a door is played by a mother trying to murder her four-year old. All the agents in the super secret society of the film's title whose offices occupy the backrooms of a Saville Road tailor shop are named after the Knights of the Round Table, Galahad (Firth), Arthur (Michael Caine), Merlin (Mark Strong) and Launcelot (Jack Davenport). Eggsy is given a shoe with a spike like the one Colonel Rosa Klebb (Lotte Lenya) sported in From Russia With Love, though that's nothing compared to the murderous Oscar Pistorius blades sported by Valentino's side kick Gazelle, (Sofia Boutella). Without giving away the plot, we can reveal that the Queen of Sweden will allow Eggsy to fuck her in the ass if he saves the world. To take offense at either the film's violence or silliness simply misses the wonderful pointlessness of it all.