She leans over, and opens the bag. Her sharp, "I'm Not A Waitress" red painted nails glistening in the low light of the play space -- or what you might call a "Dungeon." She is a well-shaped woman of a certain age; and her male partner is tied to what is known as a "spanking bench." She could be a teacher, a nurse or lawyer when she isn't tied into a corset standing in five-inch heels. Her lips are ruby red, matching her finger nails. She removes something dark. Something long. Something leather. As she stands, it almost slithers from the bag. She steps up, lifts her arm, and that long, leather something whistles through the air ... a foot or two in front of my gaping mouth ... Crack! Like a gunshot, the sound permeates the space. Again, her arm moves, her breasts heave and the object of her affection is in bliss. I briefly wonder if they are married or just met here and if he might be a police officer or a judge in his day job. It really doesn't matter. What is clear is that they are ordinary people enjoying not being ordinary.

The lights are low, but I can still see everything that is going on. Perhaps not in garish detail, but certainly well enough. Despite the throbbing, driving scene music, you can hear some of the moans, the sharp slap of toys. Look at all those people -- sharing, connecting ... playing! That one over there in a sexy flogging scene. This one here getting paddled. Another spread on a cross, tied tautly by the arms and legs. Dominant types reaching into their toy bags, pulling out some new article to create a different sensation. This is hot. This is what over 600 people traveled to Columbus, Ohio for ... and have taken over a perfectly ordinary hotel for a weekend of mischief and very sexy, sex education.

I pinch myself. Welcome to the edge of the Bible Belt and the not so undercover world of an emerging, kinky and incredibly diverse sex scene in the Midwest. You want spanking, bondage, rope play, LGBTQ, straight, body acceptance, age acceptance, sacred sexuality, tantra, bd/sm and everything in-between? It's right there in Columbus, Ohio. Ohio may be the country's "test kitchen" for fast food restaurants and it may also be the country's only "Test Kitchen" for what "everyday" Americans are wanting to experiment with when it some to sex. And they are showing up.

Meet Andrew "Barak" Gardinier and Trina "Brat Sheba" Gardinier, "Ordinary" Ohio Citizens By Day (or at least at their day jobs), and Sexual Super Heroes all the rest of the time. They are what most would call; "Sex Educator Pioneers." They have been married for about 14 years and together for almost 16. When I asked Andrew to describe their relationship he said this: "We are in a primary partnered, non-monogamous, married relationship with agreements. In other words we are married and ethically polyamorous." 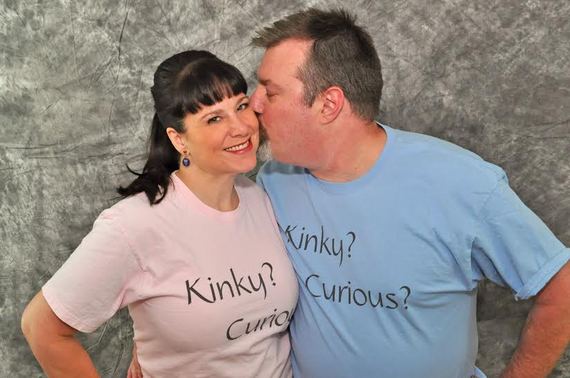 They are also the founders of Adventures In Sexuality (AIS) which was formed on Jan. 13, 2006 and just celebrated its 10th anniversary. This not-so-little group with about 4,000 online members (many more visitors and voyeurs) and roughly 1,500-2,000 regular attendees, two widely attended kinky conferences where 600 kinksters show up from all over the country called COPE and Winter WIckedness. And there is more! To meet the growing need, there is now an addition of a new sexuality community center that is just opening called "The Space."

I asked Andrew and Trina why they do what they do?

"We primarily do what we do, because we want to create a safe and nurturing space for people to seek and discover/uncover their bliss. For us, it is essential for people to be free to experience their sexual aspect in an accepting environment. Here's the thing; all the other aspects of self -- emotional, physical, mental, and spiritual -- have outlets and facilities, and supportive environments ... but not so much with our sexuality. Sex is a part of ourselves, yet it lives a life of shadow, shame, and persecution. We want to change all of that.

We strive for the acceptance and equal consensual expression of a persons sexuality -- regardless of gender identity or sexual orientation. People will push their sexual boundaries. They will seek out and find sources to experience that part of themselves ... and if it is kept in shadow ... it will remain a source of shame, and will remain a 'dark' and 'perverted' place. It's essential for people to have safe and protected spaces to seek out and experience their sexuality in a consensual and open environment ... or it becomes twisted (and not in a good way)."

So, do you want to be free? Explore? Attend amazing classes and learn just about everything having to do with sexuality in all its flavors? Consider a trip to Columbus, Ohio. Really.