Protesters gathered to stage agay kiss-in at a Burger King franchise in Spain Saturday after a same-sex couple was reportedly kicked out of the restaurant for kissing.

A security guard asked two gay men, ages 18 and 19, to leave the Burger King in Madrid's Plaza de los Cubos last month after a patron who was eating there with his kids complained about them kissing, according to El Pais.

“He said to us that we couldn’t do things like that. That there were children around," one of the men told the publication, adding that the pair ultimately left the restaurant because they did not want to cause trouble.

Arcópoli, a Madrid-based LGBT rights group, contacted the couple about the incident, offering them legal support and demanding an explanation from Burger King. The group also organized a gay kiss-in for Saturday, during which about 100 people showed up in protest of the chain's discriminatory act.

"This type of behavior is unacceptable in our city and we hope that the 'Burger King' chain will take sufficiently forceful measures to make sure it doesn't happen again," Amanda Rodríguez, Coordinator of Arcópoli, said in a Facebook post. 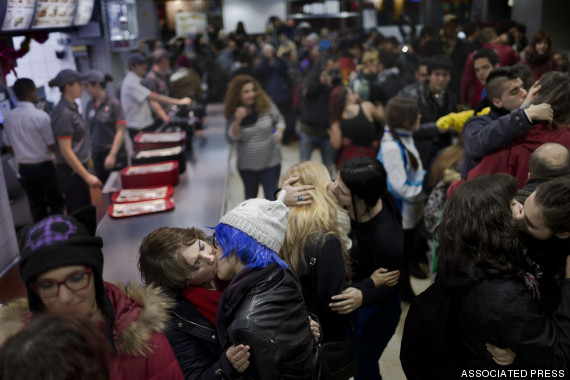 The restaurant's manager told The Local that he supports diversity and that the security guard acted without permission. He said he would like the couple to return to the establishment so he could apologize to them in person.

A Burger King corporate spokesperson was not immediately available for further comment. However, Arcópoli received a statement from the company, reading:

BKC has a long history of dedication to diversity, including support for the LGBT community. Diversity is a a driving force for our innovation and to develop an inclusive environment for everyone: employees, franchises, providers, and customers of BURGER KING(r) restaurants. The franchise that operates this BURGER KING (r) restaurant has a zero tolerance police for any type of discrimination and, upon learning of these events, has taken immediate measures to address the incident.

Spain was listed as the country most accepting of homosexuality in an April Pew Research poll on global views on morality. However, El Pais noted there were 38 reported homophobic assaults in Madrid last year.