Timothy Haskell, off-Broadway director turned haunted house creator, is a tall, broad-shouldered guy, with a frenetic, charming energy as he gestures enthusiastically. Haskell, who wears his large glasses pushed back on the top of his head in iconic Broadway boss style, spends his days inside the dark recesses of our New York minds. He wants to discover what keeps us up at night. So far his list includes: fear of being trapped (claustrophobia), fear of dolls (pediophobia), and fear of ladders (stepnophobia) -- also entomophobia, illyngophobia and sitophobia (insects, dizzyness and eating, respectively).

Haskell has spent the last seven years asking New Yorkers to describe their deepest anxieties via Twitter, MySpace, Facebook, and on-the-street teams. Each year, he translates the results of his surveys into a haunted house. Past themes have been ghost stories, vampires, and bad dreams. This year, it's superstitions. You won't find witches, ghosts or jack-o-laterns in Haskell's house, but you will find a clown lady giving birth in graphic detail to "the biggest, fattest dude in a diaper" co-directer John Harlacher could find.

Although there are plenty of creepy actors lurking around -- dressed as mental patients or wearing black and not afraid to get in your face or creep up behind you -- men jumping out at you in the dark is almost besides the point for Haskell. "Startles are... instant gratification," he said while sitting in a stairwell of the building that houses Nightmare: Superstitions at Broadway and Houston. A few weeks before launch, when the bones of the house but not yet the skin were in place, he told me, "You know that you've scared the person if they've jumped. I don't always know whether I've scared someone. Because what I'm trying to do is actually haunt you." Scaring the shit out of the viewer is his bread and butter, but imprinting lasting trepidation is the clincher.

Haskell's method of survey and research serves some themes better than others. Nightmare is akin to a horror play where our deepest fears are the main characters. And this is not easy to pull off. Haskell acknowledged that Vampires (year six), was not quite as successful as Ghost Stories (year four). "[Ghost Stories] was probably the most personal one out of all the houses we've ever done... I took what I thought were the 13 coolest ghost stories that people told me. Because the better they were the scarier they were, and that's what people want: the scariest rooms." For Vampires, Haskell surveyed New Yorkers about their fears, but he also did historical research on the origins of the vampire legend. The result was almost too esoteric. (The New York Times observed, "Some of the stops on the tour may not scare you so much as invite you to admire the craftsmanship.") Haskell grew wistful while discussing it. "What I staged was the actual vampires. So I had people like rabid maniacs and people with diseases and misunderstood... they were putrid and scary and desperate and all those kinds of stuff. But none of them looked like Dracula," Haskell said. He added, "a lot of people were very confused by what I was trying to accomplish."

That feeling can't be too unfamiliar for Haskell, who got his start as a downtown performance artist: "I'd be lucky if 90 people came to something I did," he told me. But from the very beginning, Nightmare resonated with New Yorkers, big time. The first night, after only minimal advertising, 1,500 people were outside. Now the house draws around 40,000 viewers a year.

When researching Superstitions, Haskell was initially taken aback by his results. "I was looking for someone to say: 'When I go on a job interview I wear three pairs of underwear.' I wanted some crazy shit like that. I wanted personal. But no one, no matter how many times I would blog about it and say 'Okay, let me retell you how I want this to work.' And I would just keep on getting Oh... Bloody Mary! Bloody Mary!'"

So the house does have a room devoted to Bloody Mary, which is smartly designed, but not as scary as the enormous man in the claustrophobic, blood-soaked rabbit room, who forces you to kiss a bloody rabbit before moving on. The rabbit is made out of silicone. But it feels sticky and real.

Haskell seems similarly disappointed with his own superstitious beliefs. He confided to me that he wished they were sexier. "Tim Haskell brushes his teeth eight times before he builds a haunted house. It's nothing like that." Instead he has "a thing with cracks and destinations."

In the multi-billion dollar Halloween industry, Haskell stands out as the auteur of horror. A seven year veteran of the haunting craft, he has honed his skills and his tools, with a wide range of disgusting -- and handmade -- props, very clever set pieces, and a group of actors who will do almost anything to freak the viewer out. The result of all this is part mad funhouse complete with a nauseating, kaleidoscope hallway, and part asylum, filled with escaped mental patients tormented by demons brought on by breaking superstitions. The overall effect is like walking through, and participating in, a sophisticated horror play. It's scary, gory, and not for the faint of heart. In other words, I highly recommend it.

Harlacher describes walking through parts of the house as "the experience of being insane." I asked Dr. Anne Marie Albano, an associate professor of clinical psychology at Columbia who specializes in fear and anxiety in children, about why people enjoy this sort of thing. She says, "you get a rush of adrenaline and accompanying sensations of breathlessness, muscle tension, a little tingling, that for some people actually are panic attacks. But for a person who is not prone to anxiety, these sensations are actually interpreted as pleasurable." She added, however, that she didn't think much of the concept of a haunted house that plays on an image of mental illness: "It's quite offensive to those of us in mental health, and you can quote me on that."

I asked Haskell and Harlacher what they made of this claim. "I am not trailblazing the idea of asylums for the mentally ill as scary places," Haskell wrote in an email. Harlacher added, "The goofy Halloween images of witches and mummies and devils were once taken very seriously by people, and to use them was offensive to most. Now, people don't believe in that stuff, but they need the experience of confronting the unknowable and destructive, thus our use of asylums and madness." Both men stressed that the characters in the house are not crazy -- but sane, just "in serious trouble" for breaking superstitions. As for the panic attacks... well, those do happen. People faint three or four times a year, Haskell said, and that's not the worst of it. "I think the proudest accomplishment was during Ghost Story someone threw up out of fear... that was pretty awesome." Haskell paused, "and then at Bad Dreams someone shit themselves." Haskell smiled. 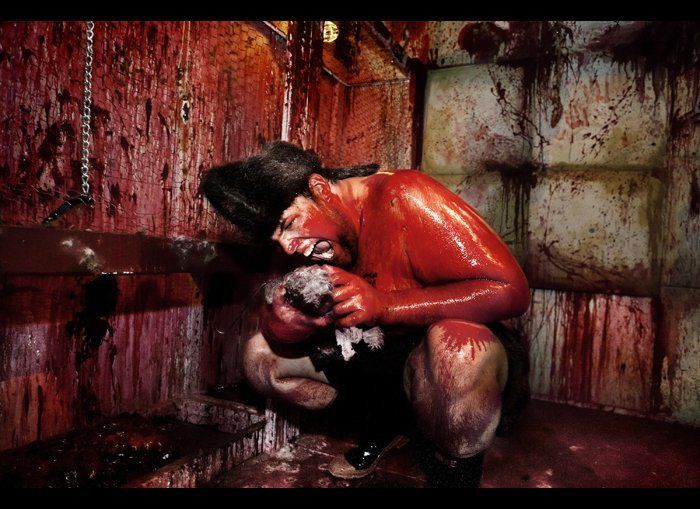