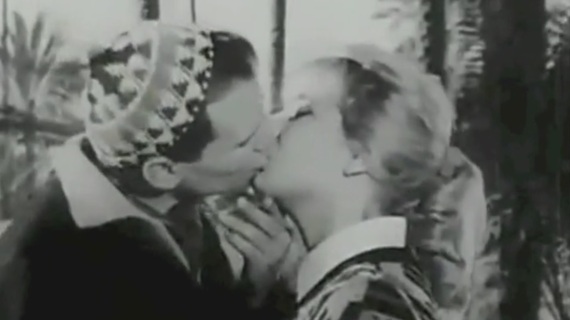 "You are not allowed to do this here," boomed a slightly underweight and frail-looking security guard at a shopping center in Cairo shortly as I broke away from hugging a female friend good bye.

My 14-year-old self's first response, after having read news of arrests due to public displays of affection, was "Hugging is okay. Kissing is not!"

The confused security guard looked me in the eye and slowly walked away, unsure what to make of my awkward response.

Seven years later, while Egyptian cinema screens unreservedly show abuse of women, rape and violent sex, kissing remains out of the question, both on and off the screen.

"They would first think I am a whore. And then, they would go after my boyfriend. Ironically, I would be sexually harassed along the way by someone who was so against me kissing the person I love."

"People would criticize me, shame me. It's just overall uncomfortable knowing that everyone around you will judge you," says Tarek, who admits that while he would 'not really' kiss someone in public abroad, he would be more likely to because the reaction would not be as negative.

Agreeing with Tarek, Farah Aziz says that she has found any physical contact in public as uncomfortable.

"I met my last boyfriend on a trip in Europe. He was Egyptian as well. In Europe we didn't have to think twice about kissing in public. However, back in Egypt even just hugging wasn't an option. Any sort of physical contact was very uncomfortable for both of us as it felt like people were constantly staring us down," reveals Farah.

"Funny enough those same people were the ones who made full use of the cinema's back row once the lights were dimmed. " 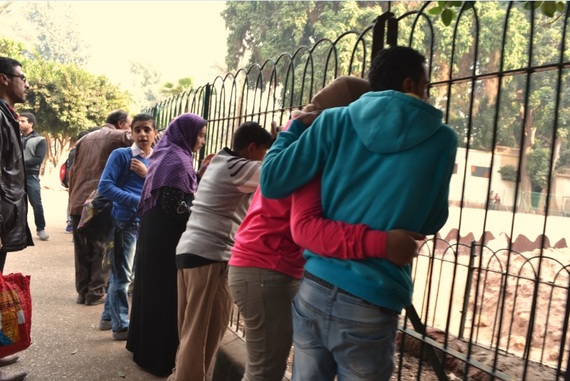 A young couple on a date at the Giza Zoo. Credit: Mohamed Khairat

Often-times, men and women are harassed by passers-by for public displays of affection in Egypt.

Marwa Dawoud*, 24, says she believes she should be able to show affection to her partner without fearing harassment or arrest.

"I should be able to hug and kiss my boyfriend without getting the looks, comments and potential third degree arrest," said the 24-year-old who preferred to remain anonymous as she did not want family members questioning her beliefs. "What is it to them anyways? I'm not harming anyone. I've never understood why people are so intimidated by any sort of affection."

In Egypt, public displays of affection are often prosecuted under laws of public indecency, meaning those who kiss on the streets can be fined or imprisoned.

Yet, for many in Egypt, the root of affliction towards kissing and other public displays of affection goes back to social moral codes.

"It is 3eib (a common Egyptian term that loosely translates to unacceptable)," explains blogger Enas El-Masry.

Wael Abdul Aziz says this '3eib-ness' comes from the fact that kissing is often connected to sex.

"Kissing is such a taboo due to its relation to sex in the minds of many people," says Wael, who nevertheless disagrees with it being a taboo. "That may be the reason why many people see it as a private thing that is only allowed in the privacy of your bedroom."

Kissing, however, was not always limited to the private space of individuals. While Amr Waked was widely criticized for his on-screen kiss with Scarlet Johansson, this was not the case during Egypt's 'golden age' of cinema.

While the legendary Umm Kulthum was known for refusing to be kissed on the silver screen, Anwar Wagdy would openly brag about his smooches.

Today, such displays of affection in the media would be met with stringent criticism.

"While Egyptians flock to see American movies with couples kissing at their wedding, in Egypt kissing your husband or wife at a wedding would be out of the question," says journalist and writer Dalia El-Daba.

"I don't think it's an indication of anything, because even though "kissing" may not be as frequently occurring in movies, a lot of more "sexual" scenes are displayed. God forbid, it doesn't mean our cinema is any 'cleaner," asserts Enas, citing how Egyptian movies tend to portray violence against women, yet find kissing a taboo.

"But again, movies kind of tend to set a tone for the more "pop culture" consent. And sometimes, the image projected by movies collides with what people on the street believe."

One opinion that recently 'collided' with the general view against public displays of affection and sexual scenes, leading to debate in Egyptian media, came from Egyptian actor Lotfy Labib.

"The TV screen is like a mirror you have at home," said Labib in a television interview. "We need a little nudity on TV in order to undo our repression of our [sexual] urges."

While Labib's comments relate to sexual harassment, they do reveal the role the media plays in shaping society's views on various issues. Kissing, whether it is on the silver screen or on the bustling streets of Cairo, shouldn't be denigrated to a sexual taboo, but instead seen as an expression of love and affection.

"There's a contradiction of societal norms in Egypt. People advocate for something and then contradict it with their actions," explains Enas regarding how many Egyptians would cite religious reasons when harassing a couple for holding hands on the Nile's Corniche, but then contradicting such beliefs moments later.

"If people are that keen on positive change, I believe attending to one's own manners will reap much faster and concrete change than pointing fingers at others."

*Some names were changed at the request of those interviewed.