Scientists are unveiling a rare octopus that has never been on public display before.

And unlike other octopuses, where females have a nasty habit of eating their partners during sex, Larger Pacific Striped Octopuses mate by pressing their beaks and suckers against each other in an intimate embrace.

The beautiful creature can also morph from dark red to black-and-white stripes and spots and can shape-shift from flat to expanded.

The sea dweller will be on display starting today (Mar. 6) at the California Academy of Sciences in San Francisco.

"I'm thrilled that Academy visitors will have the opportunity to view this fascinating animal up close in the aquarium, where they'll see just why its beauty, unique mating technique and social habits are intriguing the cephalopod community," said Richard Ross, a biologist at the California Academy of Sciences, in a statement.

Octopuses are known for their clever antics, including their various means of disguise. For instance, the Atlantic longarm octopus (Macrotritopus defilippi) has been observed mimicking a flounder by swimming forward with its arms trailing behind like flounder fins. That octopus even contorted its soft body so both eyes moved to the left like a flounder's would. 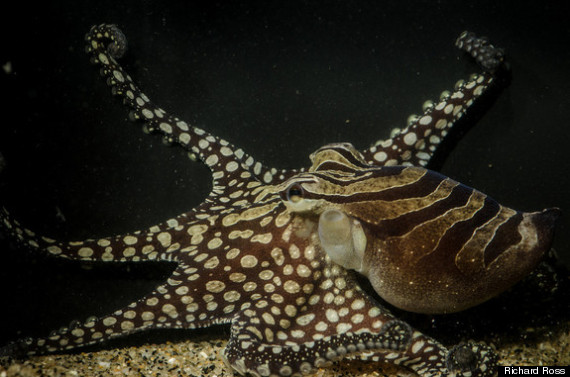 The octopus can change its color pattern from a deep red hue to a wacky combination of stripes and spots. Credit: Richard Ross

And the mimic octopus (Thaumoctopus mimicus) can shift its color and shape in mind-boggling ways, impersonating everything from sea snakes and giant crabs to stingrays. [See Video of Octopus Mimicking a Flatfish]

The Larger Pacific Striped Octopus was discovered in 1991, but it was largely forgotten for more than a decade. The species is so new that it still doesn't have a name.

Unlike other octopus species, females survive many years to lay several clutches of eggs, rather than dying after reproducing once.

A female is going on display first, but will soon be joined by a male companion, at which point the scientists expect them to mate often (and peacefully).

Though scientists don't know much about the creature's natural living conditions, the Larger Pacific Striped Octopus is thought to live in large groups with 40 other octopuses of the same species. The researchers hope to introduce more individuals into the aquarium to see how their behavioral dynamics change in bigger groups.