Your dishes are sparkling after you dry them off -- or is that just the E. coli?

We're always on the hunt for ways we can keep our homes germ-free, and we landed on one particularly NASTY vessel of ick: towels.

If you're drying silverware with a kitchen towel, for instance, chances are you're drying it with germs. A 2014 study from the University of Arizona found that 89 percent of kitchen rags carried coliform bacteria, the stuff found in both animal and human digestive tracts that's used to measure water contamination (though to be fair, not all of it is dangerous). Twenty-five percent tested positive for E. coli.

We took a deep dive into the particulars of towel cleaning: how often should you wash the various kinds of towels used on a daily basis? It turns out you should wash all your towels more often than you probably think. For bath towels, the experts we spoke with recommend washing after about three uses to remove millions (yes, tens of millions) of dead skin cells and avoid that musty scent. Kitchen rags should ideally be dipped in diluted bleach between uses (who knew?), according to a University of Arizona germ expert. And face towels should really be replaced after every use if you don't want to reintroduce bacteria to your pores, says a dermatologist.

Here's an expert-vetted guide to keeping your towels fresh, fluffy and filth-free. 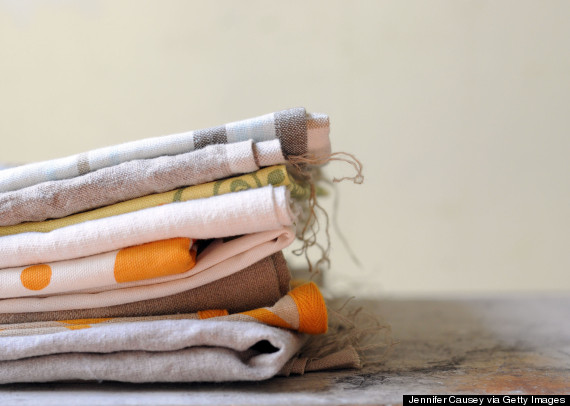 KITCHEN TOWELS
As mentioned, these are hands-down the most worrisome towels in your home. "You may think you are cleaning the counter where food will be placed," says Kelly Reynolds, a researcher at the University of Arizona’s Zuckerman College of Public Health. "But if you are using a dirty kitchen rag, you may actually be introducing hundreds of thousands of bacteria."

The answer? Ideally, says Reynolds, you should launder your kitchen towels after each use. A next-best option, though is to dip your towels in a diluted bleach solution between uses, and let them dry. Reynolds recommends filling your sink with water and a bit of bleach -- two teaspoons per gallon of sink water will do the trick and prolong the time you're able to use your towels between washes. At least weekly, launder them in your washing machine (on an antibacterial or sanitizing cycle, if possible). 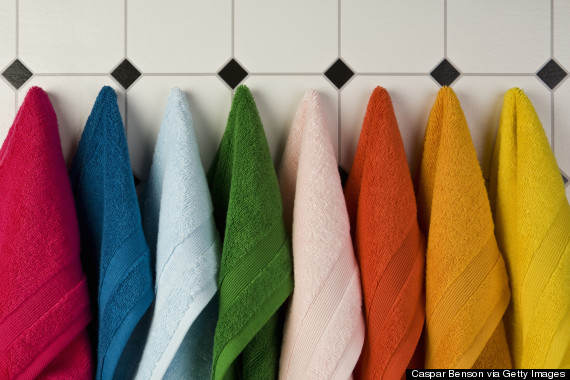 BATH TOWELS
That musty smell isn't your imagination -- because bath towels are extra-thick, they lock in moisture and harbor odors more quickly.

The answer? When you wash them, use vinegar in place of fabric softener, says laundry expert Mary Marlowe Leverette. "Fabric softener residue traps odors," she explains. "The vinegar strips it away." (As a general rule, skipping the softener also keeps most towels absorbent).

Leverette recommends running your bath towels through the washing machine as normal, but with no soap and just one cup of vinegar. Then, wash again with regular detergent. Mary Gagliardi -- aka Clorox's "Dr. Laundry" expert -- says to give them a "second rinse," if your washer has that option. Dry immediately to prevent mustiness.

You may be accustomed to using your bath towels for weeks between washes (not that we, ahem, do that), but the experts we spoke with advise washing them after about every three uses. If you're sick, it's important to disinfect towels with chlorine bleach (if they're white) or disinfectants like Lysol that contain phenolics (if the towels aren't white), says Leverette. 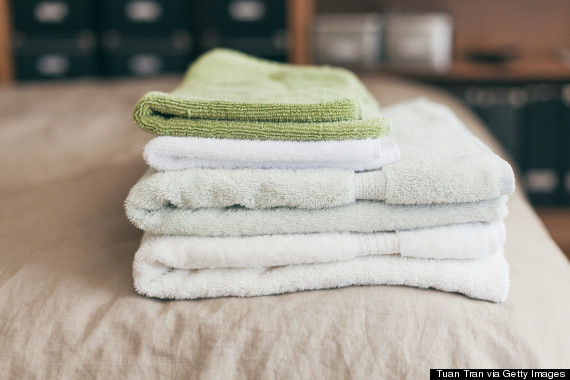 FACE TOWELS AND WASHCLOTHS
The issue is -- you guessed it! -- bacteria.

"Dirt and bacteria have a way of getting caught in the fabric on a washcloth," says Dr. Eric Schweiger, of New York's Schweiger Dermatology. "When you wash or dry your face with a dirty washcloth, you're reintroducing that dirt and bacteria back into the skin."

The answer? The experts we talked with were strict on this one: Face towels and wash clothes should be washed after every use. And while that's the ideal frequency with which you want to wash your face and body cloths, it's really about how much you use it. If you're only using a towel to pat your face dry, Schweiger says, it's okay to use it a few times between washes. But if you're removing makeup, a real-deal laundering is necessary. He recommends a regular, hot-water wash cycle, using fragrance-free detergent to avoid irritating your skin.

So does this mean you need to trash all of those towels you've had since your first apartment and start from scratch? Not exactly. The experts we spoke with say you can actually keep your same towels for basically ever. Dr. Laundry points out that a good-quality towel will last anywhere from five to 10 years -- and as long as it's clean, it can do its job until the day it becomes threadbare.

Or as Leverette puts it, "there is no harm in using a clean, old towel!"

That's one piece of news we like to hear.

If You Have 15 Minutes...
I Heart Organizing
Organize your messy vanity. The easiest way to make your bathroom feel more inviting is to clear out the clutter with this budget-friendly approach, says Jennifer of the blog I Heart Organizing. Use old soup and paint cans as holders. She stored brushes, hair tools (the cans are heat resistant) and beauty supplies in them to keep things neat and easily accessible.

Get Jennifer's under-sink bathroom organizer tutorial
If You Have 1 Hour...
Crafty Allie
Camouflage outdated faucets. Allie, the blogger behind Crafty Allie, took run-of-the-mill fixtures and spray-painted them with Rust-Oleum oil-rubbed bronze metallic, which quickly shifted things from polished to rustic.

Get Jessica's magazine rack tutorial
If You Have 5 Hours...
Thrifty and Chic
Give your unframed mirror an easy facelift. Instead of buying a pricey new one, Alicia, the blogger behind Thrifty and Chic, spent only $13 on supplies to make a wood frame for her existing mirror that made it feel instantly like a custom piece.

Get Alicia's framed mirror tutorial
If You Have 1 Day...
In My Own Style
Panel your bathtub. If your room lacks character—or you need to hide a builder-grade acrylic tub—molding adds charm and distracts from outdated elements. In My Own Style blogger Diane made a wood frame and added bead board to give her basic bathroom a sophisticated aesthetic.

Get Diane's decorative bathtub molding tutorial
If You Have 2.5 Days...
Turning It Home
Add floating shelves. Contemporary open shelves not only provide extra storage space for your toiletries, but they also give you room to display decorative accessories—an easy alternative to hanging artwork. Kimberly, of Turning It Home, traded in her clunky metal shelves for floating ones she built with scrap wood and hung with upside down L-brackets.

Get Kimberly's faux-floating wood shelves tutorial
If You Have 3 Days...
Remodelando La Casa
Give your vanity some personality. Cristina's, of Remodelando La Casa, vanity was still functional, so to revamp it, she simply removed the doors and painted it dark brown. Then, to give it the look of a custom piece of furniture, she added modern silver towel holders and feet to the base.