Sometimes friends grow apart, but other times they grow together.

The latter seems to be the case for Koda, a kitten who befriended an older golden retriever named Keelo. This time-lapse video shows the pair’s friendship blossoming through Koda’s first eight months of life.

Trisha de la Paz, the animals' owner, told The Huffington Post she'd had Keelo for about five years before adopting Koda. De la Paz, who lives in the Philippines, said her brother heard meowing outside his bedroom window one night and they later discovered the kitten in an empty lot nearby. Determining that the kitten had been abandoned, they brought him into their home.

Even though Keelo, now 6, has always been gentle, de la Paz said they weren't sure how he would react to such a tiny kitten, and also worried that the cat might be overwhelmed by the large dog.

Her worries were unfounded, though. Keelo immediately began curiously sniffing Koda, who was unfazed and just as curious about the golden retriever.

"Twenty minutes later, they were cuddling on the floor," de la Paz said. "They have been inseparable ever since."

While the adorable golden pair are the stars of this video, they aren’t the only animals in their household. They also pal around with a newer addition to the family -- a brown kitten named Drogon. De la Paz found him "drenched in the rain" one night and couldn't help but give him a home.

"[Drogon] has a very sweet and calm demeanor -- quite the opposite of Koda, who is very energetic and mischievous," de la Paz said. 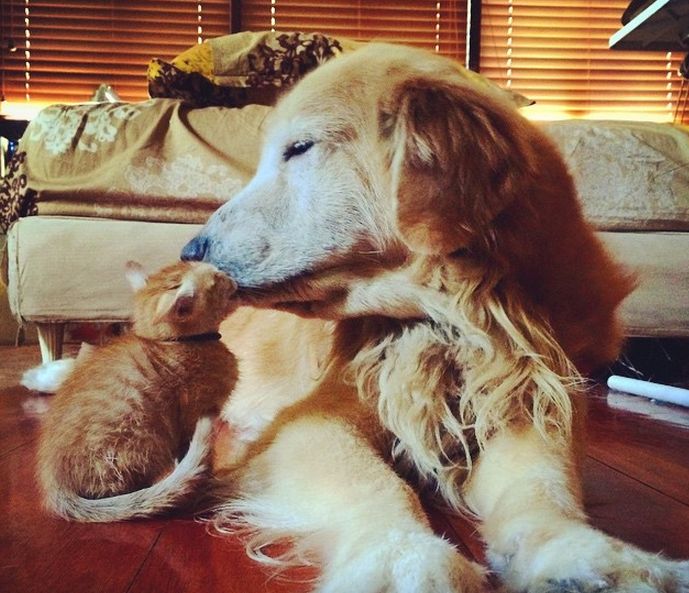