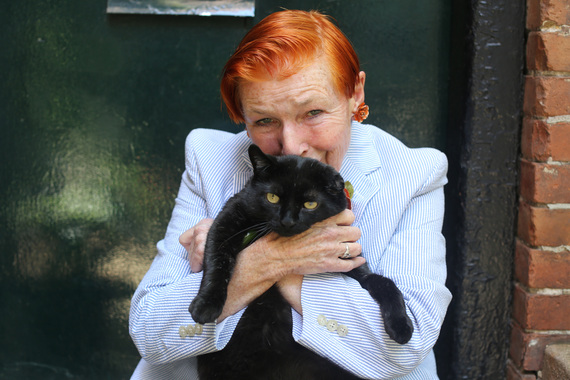 There is a fearsomely sad sequence in Disney's 1955 film Lady and the Tramp, with a dreaded door in a dog pound being stared at by a group of incarcerated dogs about to be euthanized. This saddened me so when I was a little girl, I wanted go to the pound and hold unwanted cats in my arms -- cats whom I knew would meet the same fate.

Even today, this is the fate of older shelter cats because potential adopters tend to choose kittens over adult cats. How can they not? Kittens are cuddly tabla rasas that meow sweetly and have blue eyes.

According to The Wall Street Journal this is "kitten season." Called so because female cats usually give birth in summer, flooding shelters with unwanted kittens.

New York's ASPCA estimates 2,300 kittens will pass through their facility this summer in hopes of adoption. What's left will end up with other animal rescue groups, or be euthanized. To give these kittens a head start, the ASPCA has just opened a neonate section for abandoned kittens under four weeks old, conceived and set up by Mike Phillips of NYC Feral Cat Initiative.

This is good. This is picture book perfect. No one wants to imagine feral cats, bodega cats or cats of careless owners giving birth to slews of kittens in the heat of summer. But what got to me is this: According to NYC Animal Care and Control, it is the adult shelter cat that is most impacted during kitten season. These cats of character and life experience will have to be put down because people tend to go for the innocent and the sweet.

What a shame I think looking at my old boy, Oberon lying here next to me in the sun. Oberon the unadoptable! Oberon, my huge black cat with one ear, a scar on his right eye and no teeth, that had been on the streets of New York for ten years before I adopted him three years ago. I urge you to do the same.

The evening my husband and I took Oberon home, he entered his first apartment ever and immediately went under the bathtub. Because we are theatre buffs, I thought a musical might be in order -- and I don't mean CATS. I put on a song that might soothe him -- "Bali Ha'i" from South Pacific.

Before the second verse finished, this huge cat lumbered out from under the tub, moved into the living room and stretched out in front of the fireplace. Of course, I cried. At that moment, Geoffrey and I knew we had given this old cat a brand new lease on life.

There's nothing left to say other than Do It! If you're in the market for a cat choose an older one -- a cat with character, a cat that's been around the block and back. Putting a spin on the Mayor's Alliance for NYC's Animals, I say: "Adopt an Older New Yorker Today!" You won't regret it. Though naysayers say cats can't give love, the older cat will. I promise you.