Cats are spending their nights looking for animals to murder.

That's according to new research from the University of Georgia showing many house cats spend their nights looking for birds, chipmunks, voles, frogs and reptiles to kill. But they aren't doing it because they're hungry; Time Magazine notes the cats only ate what they killed 30 percent of the time. Half of the time they left their prey to rot and about 21 percent of the time they brought their kill home.

"Kitty Cams" were put on 60 pet cats in the Athens-Clarke County area by a UGA research team, partnering with National Geographic. The cats wore "lightweight, waterproof units with LED lights to record activity at night," which recorded a total of more than 2,000 hours of fairly high quality video on a mini SD memory cards.

Kerrie Anne Loyd, a doctoral candidate at UGA's Warnell School of Forestry and Natural Resources and lead researcher on the project, said they were surprised at how frequently cats were killing small lizards.

"There was a greater number of small reptiles killed than previously thought," Loyd told ABC News. "This is probably because we don’t normally see it. The cats usually end up eating them or leaving them in the woods so we never knew before.

After small lizards, Woodland Voles (small mammals) were the most common prey species for the roaming cats.

The cats equipped with Kitty Cams killed an average of average of 2.1 animals per week. "Cats roaming during warmer seasons were more likely to exhibit hunting behavior and the number of captures per hunting cat is expected to decrease with increasing cat age," the team wrote online.

They also noted males were more likely to engage in "risk behavior" than female cats -- which includes crossing a road, entering a storm drain or engaging with a "stranger cat." About a quarter of the cats were eating or drinking substances away from home, potentially ingesting harmful substances. Which is why Loyd recommends in a brochure to keep cats indoors to protect them and vulnerable wildlife.

In a video library posted on a UGA website, you can find footage of cats growling at a dog, fighting off an oppossum, eating Chex Mix, hunting lizards and making friends with other cats. 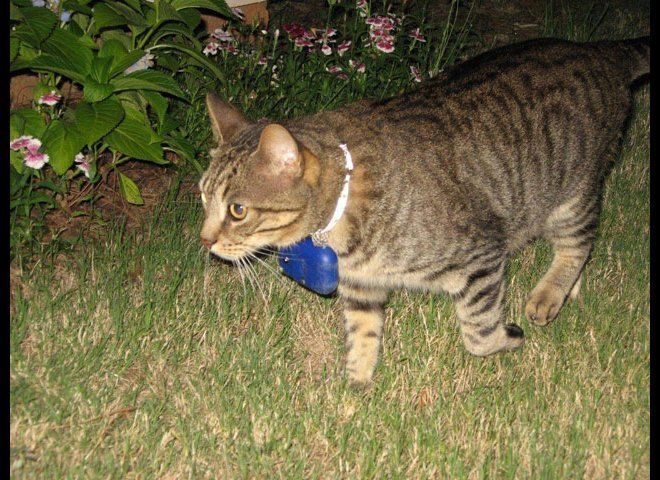