When Kjerstin Gruys got engaged to her longtime boyfriend, the former fashion merchandiser turned sociologist feared she would relapse into an eating disorder as she hunted for the perfect wedding dress. She was fiercely committed to researching her sociology Ph.D. on beauty and inequality, but was overwhelmed by the pressure of having a picturesque wedding. Her values and behavior were at odds, and she knew had to do something -- and quick.

Instead of becoming engulfed in a vanity obsession, she committed to a year without mirrors -- and launched the blog Mirror Mirror...OFF The Wall six months before her wedding date.

"I've been trying to stick to my own goal of writing honestly and openly about the process," Gruys said.

Her inspiration for the blog and staying mirror-free for a year came from "The Birth of Venus," a novel about an order of nuns who lived in Italy hundreds of years ago and gave up looking at their bodies and reflections for a lifetime. Since kicking off her blog five months ago, she's written about everything from her "No Makeup Mondays" to the history of mirrors, referencing stats such as how women spend five full days a year staring at their reflection.

Her objective for the blog? To get women to rethink body images and what they're told about beauty. To help her stick to this goal, she volunteers at the nonprofit About Face, which aims to equip women and girls with the tools to understand and resist media messages that negatively affect their self-esteem and body image. "If I had a magic wand, I'd ask women to think about and try to challenge some of the assumptions they have about their appearance, and loosen the grip that body ideals can have," she said.

One of the biggest themes that has stemmed from her project is trust, Gruys said. "I have to trust people to let me know if I have poppy seeds in my teeth. A bigger, deeper issue is trusting people in your life to not care about how you look and to love you even more for spending time with them instead of complaining about your looks."

Although Gruys said she has a supportive group of peers who have nudged her on, she has been criticized by online commenters who say she is not dealing with the root of her insecurity. "In my case, I am avoiding the mirror so I can get on with my life and do other things. I hope to take the emphasis away from my body and just focus on other things."

"I recently read something that said looking in the mirror for more and more time doesn't give you anymore information. It's so plain and true," she added.

Gruys' interest in beauty and its role in society began long before she launched her blog. The Missouri native said she has always had an interest in the interplay of culture and fashion. "We live in a culture that is very stigmatized towards larger bodies and that stigma is directed towards women, much more so than men," Gruys said. "Research shows attractive people are given a 'halo effect' ... Most of this is unconscious, but there are real repercussions if we're looking at employment discrimination, in terms of how people are hired, fired and paid."

While at Princeton University, Gruys wrote her undergraduate senior thesis on body image and sorority culture while overcoming an eating disorder.

"That was probably one of the biggest steps in terms of my personal recovery because it felt so empowering to be facing these issues from a different position," she said. "It felt like a transition, away from being a victim and towards being an activist."

For her master's dissertation, Gruys worked at a plus-sized women's clothing store and discovered some unique power plays happening with what she calls "fat talk," a term coined by anthropologist Mimi Nichter, who wrote "Fat Talk: What Girls and their Parents Say About Dieting."

"I noticed a pattern that these low waged workers, time and time again, were responsible for soothing the body insecurities of their customers ... and also their supervisors," Gruys said. "And that became particularly interesting to me because while all of the customers were plus-sized, a majority of management at this particular store were not plus-sized."

"There's a rule of 'fat talk' that says you shouldn't complain about your body to someone who is worse than yours, but some people do it anyway and get away with it because they are in a position of power," she added. "If someone says, 'Does my butt look big?' they tend to do that in the direction where someone they know will respond kindly."

For her Ph.D. research, Gruys has moved on from body image and started examining vanity size -- when clothing that was once, say, a size 8, becomes a size 6 so that women feel better about themselves, she said. By analyzing Sears catalogs from the past 100 years, Gruys said she's seen drastic changes in clothing size over time. "I think the most interesting thing I've found so far is simply that clothing sizes have changed so dramatically, especially for women, and in the direction of getting away from having the clothing size and clothing measurements having any relationship to each other."

"When we think of standards we think of things that make our lives more standard and more efficient," she said. But clothing size standards are different across every fashion firm and even across brands within a firm. "We attach so much emotion to body size, women especially and companies want us to feel good when we are trying on their clothes."

While Gruys maintains that her blog and Ph.D. research are separate projects, she has used her studies to understand how beauty culture shapes women's lives and explore how her own story fits into the larger picture. And with less than two months to go before her wedding, she has learned to place less value on physical appearance and invest more in her relationships and volunteer work. 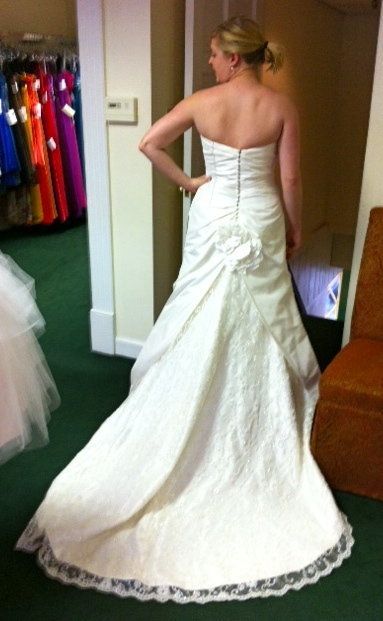 1 / 5
Last Glance
Kjerstin Gruys in her wedding dress at a St. Louis bridal salon the day before the project began
Courtesy of Kjerstin Gruys