In response to a string of recent break-ins, the Traditionalist American Knights of the Ku Klux Klan has given a local Pennsylvania chapter the go-ahead to form a neighborhood watch group.

“You can sleep tonight knowing the Klan is awake!” read fliers promoting the neighborhood watch group in Fairview Township. The leaflets appeared on the doorsteps of homes along Ridge Road on April 18, PennLive reports. 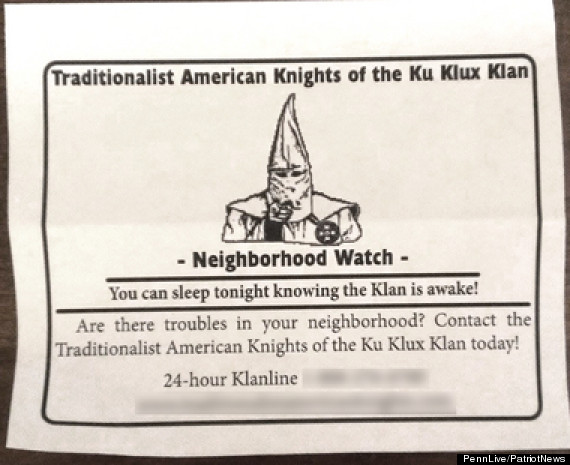 “It’s just like any neighborhood watch program. It’s not targeting any specific ethnicity. We would report anything we see to law enforcement,” Frank Ancona, the organization’s imperial wizard and president, told PennLive. “We don’t hate people. We are an organization who looks out for our race. We believe in racial separation. God created each species after its kind and saw that it was good.”

According to its website, the organization -- headquartered in Park Hills, Mo., with local chapters in every state but Hawaii -- is a "non-violent" and "law abiding group" composed entirely of white Christians. The group claims to have “been misunderstood for years.”

From the website's Who We Are section:

The Traditionalist American Knights of the Ku Klux Klan is a White Patriotic Christian organization that bases its roots back to the Ku Klux Klan of the early 20th century. We are a non-violent organization that believes in the preservation of the White race and the United States Constitution as it was originally written and will stand to protect those rights against all foreign invaders. We believe in the right to bear arms against all that threaten our home and family.

A call to the Traditionalist American Knights of the Ku Klux Klan was not immediately returned.

Similar fliers promoting KKK neighborhood watch programs appeared in other states across the country this past year year. In July 2013, recruitment fliers with the same slogan as the Pennsylvania leaflets appeared on doorsteps in Springfield, Mo. In January 2014, the same flyer was spotted in driveways in Virginia.

"We picked ours up out of our driveway and threw it in the trash," Virginia resident Sarah Peachee told NBC 12. "We weren't interested in even reading about it."