After thirty years of climbing the ladder on Broadway, Klea Blackhurst had no illusions. Although she was an award-winning cabaret singer, recording artist, and concert performer with a devoted following, she had never realized her biggest dream, which was to star in a musical on the Great White Way. 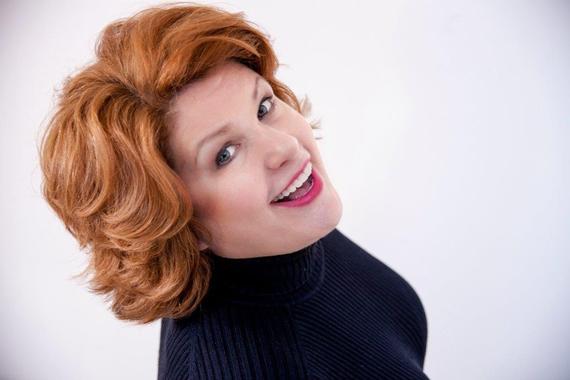 With a rich, classic belt and crackling comic chops, she enchanted audiences in New York's elite nightclubs, most memorably with a one-woman show about Ethel Merman. But when it came to musicals, Blackhurst rarely got past the audition room door. As she joined a cast several years ago that was developing "Hazel"--a show based on the Shirley Booth sitcom about a lovable maid--she braced herself for the same unhappy ending.

"I called up the writers one night and said, 'Listen, I've never done anything like this before, but your script is the best I've seen in 20 years," Blackhurst recalled. "I know every actress in town is going to want to play Hazel and every manager will pitch their client. But I'm going to make myself so indispensable that when the time comes to replace me in the lead role with a star, you will cry real tears and take me to a nice restaurant to do it."

They all chuckled, but Blackhurst had the last laugh. When "Hazel" begins previews on March 31 at the Drury Lane Theatre in Oakbrook Terrace near Chicago, she'll be starring as the lead. And with many backers aiming the musical at Broadway, her dream may finally be coming true. This, knock on wood, is a classic showbiz tale about talent, timing, and who-you-know producing a miracle when you least expect it to. And for those who know Blackhurst best, it couldn't happen to a kinder, more deserving person.

"Nobody deserves wild success more than Klea, because she's literally a Broadway superstar waiting to happen," said Jim Caruso, the New York impresario who launched the hugely popular "Cast Party" and "Broadway at Birdland" evenings at the legendary Manhattan Club. "Between the voice, the experience, and that huge heart, the audience connects with her immediately."

But her greatest gift, Caruso adds, is that she's an accomplished actress as well as an entertainer. "Yes, she belts her head off," he said. "But it's never show-offy or out-of-character with telling the story. She's a storyteller who belts. She's a story-belter."

The Long Road to Hazel began in Utah, where Blackhurst grew up. Her mother was a music theatre performer, and Klea fell in love with show tunes at an early age. As a young girl, she sang along religiously with classic recordings--especially "Annie Get Your Gun," the Irving Berlin hit starring Ethel Merman.

Blackhurst had Merman on the brain, to put it mildly: she wrote term papers about Merman in school. She dreamed about playing Mama Rose in "Gypsy." As her voice matured, she developed a powerful belt, like her idol. When Merman died in 1984, Blackhurst's friends at the University of Utah, where she was studying music, sat her down to gently break the news.

"I was her champion, not that she needed one," she said. "And I knew that musical theatre is what I wanted to do."

Blackhurst moved to New York City in 1985 with three pieces of luggage containing mostly teeshirts, record albums, and an audition dress. Like thousands of others before her, she began trying out for shows and worked off jobs to make ends meet--including a nine-year stint passing out leaflets at the TKTS booth in Duffy Square.

There were high points, to be sure. Klea took over a role in "Oil City Symphony" for five years and later appeared in "Radio Gals." But her frustrations grew. "People didn't see me as the kind of performer I saw myself becoming," she said. "I had the worst luck with agents. I never really got anything. I just wasn't getting what I wanted."

She made a pivotal decision in 1999, putting together her first cabaret show with a four-piece band. Blackhurst caught the eye of Donald Smith, a renowned cabaret promoter, and her booked her at the New York Cabaret Convention. He also urged Klea to develop a new act, and she responded with "Everything the Traffic Will Allow"--a provocative 2001 show about Merman's life and times.

Enter Margot Jefferson from the New York Times, who gave the production a rave review, describing Klea as "an improbably terrific young performer...we were watching a real talent." She would go on to perform the show for the next 15 years, and now says: "If there had been no Donald Smith, I don't think anything would have taken off for me. And the Times story was glorious...It gave me a presence and started the ball rolling."

Klea quickly became a star on the cabaret circuit. She played lead roles in regional shows of "Gypsy" and "Chicago," sang in concerts honoring Jerry Herman and Richard Rodgers, and appeared at Carnegie Hall with Michael Feinstein. She released CDs saluting Vernon Duke and Hoagy Carmichael, plus a recording of the Merman show--and that led, improbably, to her next big break.

Out of the blue she got a call in 2005 from Jerry Lewis's office, asking her to visit him in Las Vegas. He was directing a musical based on his film, "The Nutty Professor" with Marvin Hamlisch and Rupert Homes, and Michael Andrew--cast as the lead--had set Lewis the Merman CD. He loved it and asked if she'd play the role of Miss Lemon, the main character's longtime secretary.

Klea jumped at the offer, and in 2012, the show debuted in Nashville. Tragedy struck when Hamlisch died shortly after opening night, but than unexpectedly opened another door. Blackhurst's powerful rendition of "While I Still Have the Time," one of the last songs Hamlisch wrote, had become a showstopper in "The Nutty Professor," and she was invited to sing it at tribute concerts after he passed away.

By chance she met--and at one point shared a dressing room in Pittsburgh with--Lucie Arnaz, who had starred in Hamlisch's "They're Playing Our Song." Arnaz, a showbiz veteran who has a sharp eye for talent and the character needed to sustain it on Broadway, was instantly smitten.

"She [Blackhust] completely understood the lyric of the song, she had these vocal chops that were killer, and she was very old school," Arnaz said. "On top of that, she's a great dame. Somebody you love being with. A total original."

As luck would have it, Arnaz was friends with the composer Ron Abel and lyricist Chuck Steffan, who were developing a musical based on "Hazel," and she told them Blackhurst was perfect for the lead role--from her nasal Brooklyn accent to her salt-of-the-earth comic honesty. Arnaz, who would later direct a lab workshop of the show, urged writers to let Blackhurst record a demo of songs from the production so they could hear for themselves.

There was skepticism at first, because the creative team--which also included book writer Lissa Levin--did indeed want a big-name star to attract investors. And they wondered if Blackhurst's talent as a belter was enough. All doubts were dispelled after they heard her sing on the demo, saw her play the lead in "Hello Dolly" at Goodspeed Opera House, and then spent some personal time with her.

"She read ten pages of the script, and it was mutual love," said Abel. "This is a role she was born to play. It was beschert. We had a perfect match. We had found our Hazel. It couldn't be anyone else but Klea."

At the end of the day, Blackhurst says the lesson is clear: "You can't just wait in life for people to give you permission to do things. You have to speak up, do what's best for you, take chances, and hope for the best. All of these things that happened to me may look like a crazy chain reaction--but in a way they make perfect sense."

As opening night approaches, ads for the new musical, which goes well beyond the laugh track of the original 1960s sitcom, pose the question: "Can a simple maid debone a turkey, save a marriage, uncover a matter of national security, and lead a conga line? She can if she's Hazel!"

But it also helps to have Blackhurst aboard.

Joshua Bergasse, the show's Tony-nominated and Emmy-winning director and choreographer, is upbeat about the production--and over the moon when it comes to his leading lady. "This show is an epic matchup between Klea and the role she's playing, and that doesn't come along often in musical theatre," he said. "It happens only with the greats--people like Ethel Merman and Bernadette Peters--and right now this is Klea's moment. It's her turn. She's ready."

"Hazel" runs from March 31-May 29 at the Drury Lane Theatre in Oakbrook Terrace, Illinois.