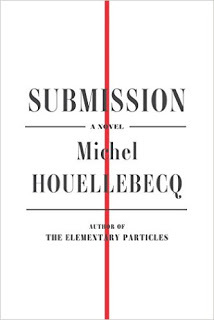 What a brilliant idea to assign a writer whose name is even more unpronounceable that the writer he is reviewing? What an equally brilliant idea to assign a writer whose work has achieved almost mythic status so that his review is immune from the usual editing accorded a piece so that the reviewer in question, a world class provocateur can take the kind of liberties that would not normally be permitted in an otherwise august publication priding itself on the illusion of objectivity. in making globalized statements about the work of another equally transgressive personality! The novel in question is Michel Houellebecq's Submission: A Novel, a futuristic jeremiad about France as an Islamic state, published on the same day as the Charlie Hebdo massacre, during the week that Houellebecq's image, in fact, graced the cover of the magazine. The Norwegian writer and author of Min Kamp (as in Hitler's Mein Kampf), Karl Ove Knausgaard, begins his front page New York Times Book Review assignment (NYT, 11/2/15) by making the startling admission that he has never read anything by Houellebecq, despite the fact that the two authors, do for modern European sexuality what John Cheever and John Updike did for the sexual mores of 50's suburban America and despite the fact that Houellebecq's The Elementary Particles had been particularly recommended to him, as a book of interest. He feels about Houellebecq the way way he does Lars von Trier; his reticence about both deriving from anticipated "envy." Here Knausgaard maintains his high standards of provocativeness by thumbing his nose at his editor for making the assignment. He goes even further, however, by pointing out that he hasn't read any of the works of the l9th century author of Against Nature, Joris-Karl Huysmans, whose works are central to Submission. So fuck you "hypocrite lecture,-- mon semblable,-- mon frère!" Knausgaard employs a preternatural perspicacity along with his signature candor, as he concludes these "virgin" observations about his embattled continental colleague's work:

"The disillusioned gaze sees through everything, sees all the lies and the pretenses we concoct to give life meaning, the only thing it doesn't see is its own origin, its own driving force. But what does that matter as long as it creates great literature, quivering with ambivalence, full of longing for meaning, which, if none is found, it creates itself?"