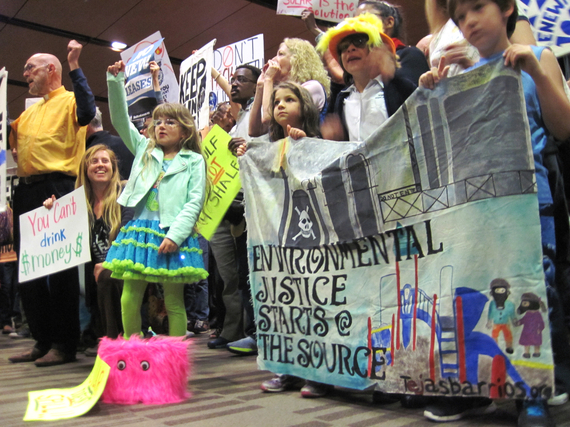 I've seen a lot in New Orleans, but never this:

Riot police lurking in the corner of a conference room deep in the bowels of the Superdome as a group of costumed children, climate warriors, radical artists and Chief Arvol Looking Horse, in a dark suit with beaded moccasins and a head full of eagle feathers, crash a high-profile meeting of oil barons, shouting:

"The Gulf is not for profit!!"

What the protesters wanted shut down was last Wednesday's sale by the Bureau of Ocean Energy Management (BOEM) of 44.3 million acres of Gulf of Mexico seafloor for oil and gas development. An area the size of Oklahoma, spread across a checkerboard of off-shore parcels stretching from Florida to Texas, some in water practically shallow enough to wade in, some in water more than 10,000 feet deep--the infamous Deepwater Horizon rig was drilling in about 5,000 feet of water when it exploded.

As the protestors protested, for the better part of an hour, the oil men and oil women, dressed in suits of blue and gray, sat back in their folding chairs and tap-tapped on their smart phones, while drinking the complimentary coffee and looking nonplused. Some smiled at the spectacle, for a bit, others appeared to be tweeting, but after several minutes of anti-oil chants, and a fair bit of yipping, the barons soured. Their parade had been rained on. And a few vented to the press about jobs and energy security.

"These lease sales," said BOEM Director Abigail Ross Hopper in a press release, "create jobs through the safe and responsible exploration and development of the Nation's domestic energy resources."

But the protestors, mostly from New Orleans or nearby Gulf Coast communities, and tired of seeing their region as the nation's fossil fuels punching bag, were not having an inch of it.

"The oil and gas industry has hijacked our democracy," bellowed climate commander Jonathan Henderson, at a pre-march rally opposite City Hall. "They've destroyed our wetlands, they've captured our regulatory agencies, and they've done it with impunity."

Henderson, dressed in a black shirt, black pants and black cap cocked sideways, abandoned a legal career to devote his life to documenting planet earth's climactic unraveling. "Not only that," he roared on, as gigantic banners made by a group called the Radical Arts and Healing Collective were unfurled on the dandelion-dotted grounds of Duncan Plaza. "The oil and gas industry has done an incredible job of green-washing New Orleans. We've got the New Orleans Jazz and Heritage Festival presented by Shell, we've got Drew Brees wearing Chevron logos on his practice jerseys, we've got schools that have Chevron planted all over them. We have a responsibility to stand up and fight for ourselves, but also for people who have nothing to do with this problem, and that's why we are going to the Superdome to stop this lease action."

"From the beginning to end," added Cherri Foytlin, a south Louisiana environmental activist who walked to Washington D.C. after the BP oil spill, "the fossil fuel industry is a carousal of death." She pointed out that oil extracted from these lease sales would be processed in pollution-spewing refineries typically placed near poor communities of color.

Mekasi Camp-Horinek, member of the Ponca Tribe of Oklahoma and son of famous indigenous environmental activist Casey Camp-Horinek, sang a stirring song in his native tongue. With the activists properly activated, they donned their banners and marched through the busy city streets and into the Superdome, chanting--"You can't push us away, you can't wash us away...Don't auction our climate, the people won't be silent!"--as they ascended a series of escalators and burst past a table with honeydew and powdered donuts and into the public lease sale meeting, where, the group quickly flooded the room and drowned out the announcer.

"They underestimated us," said a smiling Monique Verdin, protest emcee and member of Louisiana's indigenous Houma Nation, whose southern Louisiana homelands are literally disintegrating, partially because canals cut by the oil and gas industry bring salt water and storm surges into their wetlands.

"I'm ecstatic," said Dallas Goldtooth, of the Indigenous Environmental Network. "This is the first time this has ever happened in the Gulf."

"This is democracy in action," said Hilton Kelley, a dapper award-winning environmental activist from Port Arthur, Texas, where a string of petrochemical and hazardous waste facilities stream toxins into a largely African American neighborhood. "I'm fired up about it man."

The event remained boisterous but not violent, and the riot police were never called from their corner. The buzzkill came from BOEM spokesperson John Filostrat. "The intent to stop today's lease sale was not successful," he told me. "We started on time, we read every bid, and at no time did we ever stop reading the bids, so from our standpoint we did our job."

Filostrat pointed out that in the months and years preceding this sale, meetings to address environmental concerns were held across the Gulf Coast--in New Orleans, Panama City, Mobile, Alabama and Gulfport, Mississippi--and that these meetings, which you can find future announcements for here, were not very well attended. "There is ample time for public comments to be heard," he said, "but by the time we are reading the bids, that horse has left the barn." About 700,000 acres sold in this lease sale, garnering $156 million for the federal government.

Needless to say, the lease sale ended with a proclaimed victory for the protestors, who spilled out into the sunshine warming the deck of the Superdome then marched around the thing, before laying down beside their banners so a helicopter could take photos.

I found my way to Ben Yahola, member of the Muscogee Creek Nation of Oklahoma and part of a group called Indigena, dedicated to protecting traditional knowledge and sacred sites. With a hand-made hand drum in hand he waxed philosophical, and apocryphal, speaking about a time when White man will turn his knowledge on himself.

"Do you think there's an end times coming?" I asked Yahola.

"We were told by our prophets," he said, "that we will be knee-deep in blood someday."

Then we all got in cars and drove home, where I turned on my computer and read, "Scientists Warn of Perilous Climate Shift Within Decades, Not Centuries."

The blood, in fact, may be just over the horizon.