His second birthday was almost his last.

Cayden Bibeau, 2, was either shocked or psyched when he found a paring knife embedded in his Elmo-themed birthday cake over the weekend, but his father was not pleased. Nathan Bibeau told WGME that his son's birthday party was cancelled after the family found the knife, left in the cake by an employee at Walmart where he bought it.

The Lewiston, Maine family found the knife as they were cutting through it. 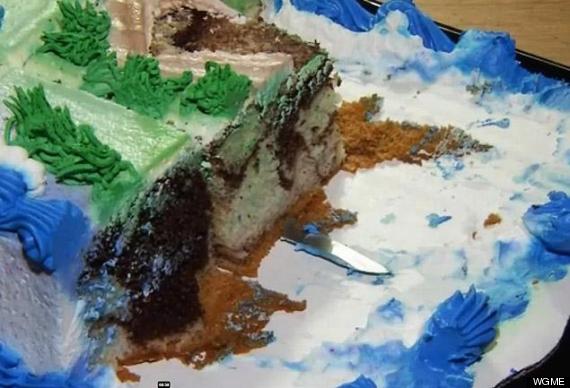 Bibeau said he was "disappointed and upset" at Walmart, according to the New York Daily News, and that his entire family left his son's party early because of the find. Yahoo! News points out, the ol' knife-in-a-cake is a classic excuse to leave a child's birthday party early).

Bibeau made waves when he publicized the cake flop, as Walmart swiftly issued an apology and considered pulling the knives from its bakeries across the country.

Bibeau says he still plans to shop at Walmart and "won't hold a grudge."